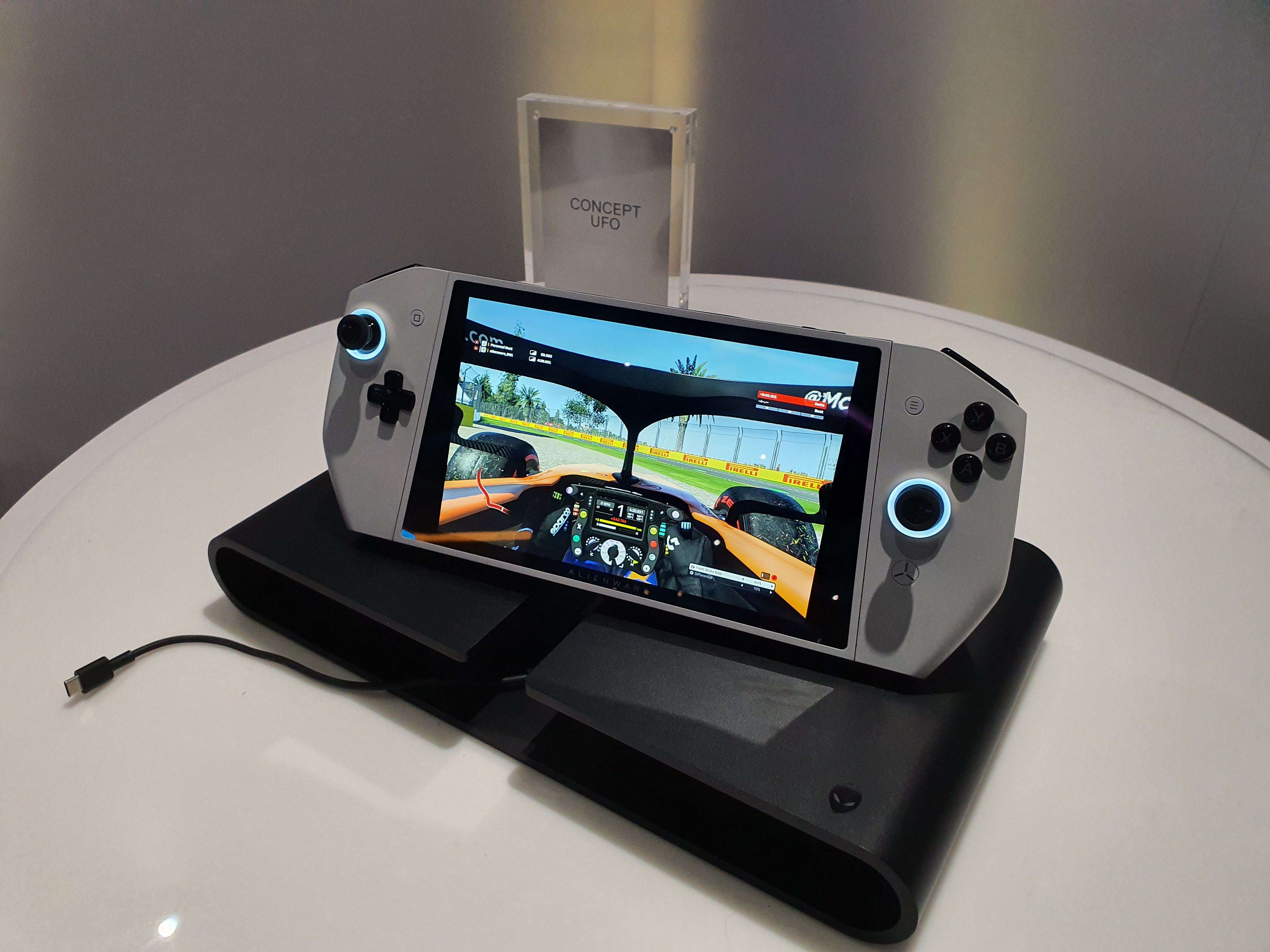 Concept UFO from Dell: PC Gaming in the palm of your hand

THERE have been some interesting tech developments on display at the Consumer Electronics Show (CES) in Las Vegas this week.

One of the announcements which caught my eye during Dell’s press conference (hosted by actress, director and avid gamer Aisha Tyler) was something the company is referring to as “Concept UFO”; one of its concept pieces aimed squarely at the gaming market.

It appeared to me to be in essence, an actual gaming laptop in the same format as a Nintendo Switch.

And I was very intrigued, to say the least, so went hands-on with the device after the conference to see what I could find out.

As a concept piece, Dell aren’t sharing a lot of the specifics of what sort of hardware it has on-board, but I was able to play F1 exactly as smoothly at it would be on my PC at home.

The controllers are detachable (their shape is slightly angled at the mounting point to make attachment and detachment easier) and the system also features a strong rumble/vibration function as well, just like in your current-gen gaming console controllers.

The controllers detach and can be connected to a portable element turning them into a traditional gaming console-style controller, with the central screen functioning independently either as a display on its own or docking to connect to a TV or monitor.

Dell’s advanced industrial design director Drew Tosh confirmed Concept UFO is an actual PC (not a wireless streaming device) and is being developed under the Alienware line.

While not at liberty to discuss the exact hardware specifications, Mr Tosh said the unit has an 8″ HD screen and runs on a 10th Generation Intel chip.

He said while Concept UFO was still a concept item and in development, the baseline minimum battery life the team had been working on was two hours at ‘normal’ performance settings – in other words, enough for a commute – and that it would be po

In my time with the unit, it was not connected to anything by wires, the fans in the back of the unit were operating, it played smoothly and responsively, the controls were good, and I estimated the weight at about 500g – and I was very impressed.

The potential uses are really attractive too – just off the top of my head, beyond regular commuting, Project UFO looked like it would be perfect for gaming on an aeroplane (thanks to its detachable controllers). The ability to play a game on your PC, save it when you go to bed, then pick up where you left off once you’re on the train or bus to work the next day is extremely appealing as well.

There’s no release date for Project UFO at this stage, although it clearly works and the version I played appeared essentially consumer-ready, but I’ll be watching its development with great interest – and so, I suggest, should you.

Royce Wilson is attending CES 2020 as a guest of Dell