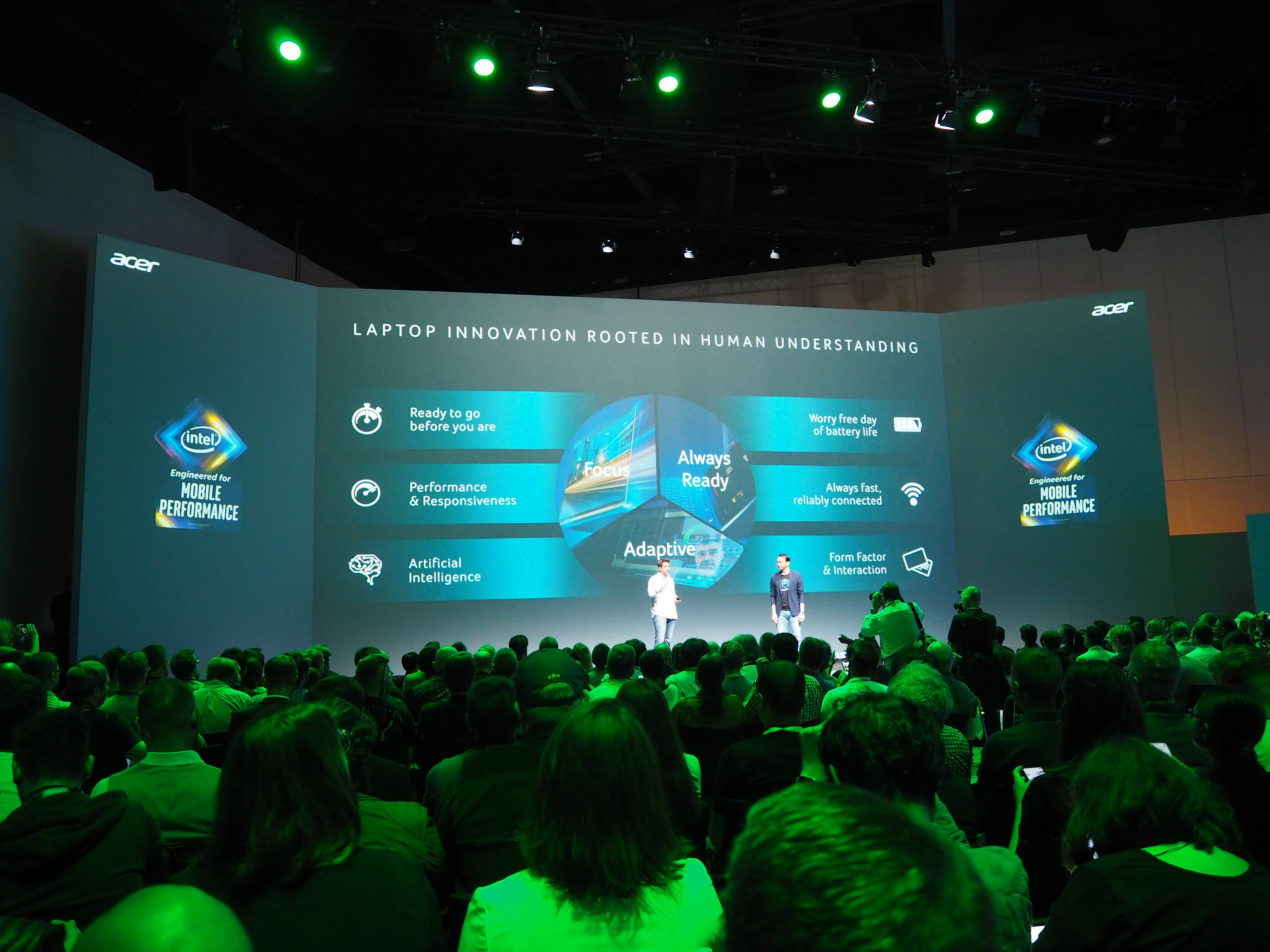 Intel’s Project Athena: Redefining the laptop for the 2020s

PRETTY much ever since computers could sit on your desk and didn’t need an entire building of their own to manage all the whirring tape reels and flashing lights and bleep-bloop noises that accompanied them, we’ve been trying to make them smaller, portable, lighter, and more powerful – in the form of the laptop computer.

We’ve come a long way, but there’s more to be done and chipset manufacturer Intel has partnered with a range of laptop manufacturers to push laptops into the third decade of the 21st century with Project Athena – an ambitious project that’s all about extending battery life and functionality of Intel-based laptops regardless of what the user is doing with them.

Before I get into the details of Project Athena as unveiled at the IFA trade show in Berlin earlier this month, allow me to put on my tweed jacket with leather elbow patches to provide a very brief contrast with what laptops were like back in the 1980s, when they first showed up in a format we’d recognise as such.

The Toshiba T1100 was released in 1985 and while not the first laptop (that honour goes to the Australian-designed Dulmont Magnum), was arguably the first mass-market one. It weighed 4kg, had 256KB of RAM (expandable to 512KB), a 3.5″ floppy disk drive, no hard drive, and a monochrome LCD display which could manage 25 lines of text. The processor was an Intel 80C88 with a  clock speed of 4.77 MHz, it ran MS-DOS 2.11, and the price for this wonder of mid-1980s technology was the equivalent of a mere AUD$6,500  in today’s currency.

Contrast this with the circa late 2016 vintage Asus X556U which is my current work laptop, featuring a 15.6″ 1366×768 backlit screen, an Intel i5-6200 processor with a 2.8GHz clock speed, 8GB of RAM (I installed an additional 4GB myself), a 1TB HDD, a DVD-RW drive (remember those?), some USB ports (including a USB-C port), an HDMI port,  a cardreader, Wi-Fi and Bluetooth, and a 2GB Nvidia 920MX graphics card. It weights 2.3kg, runs Windows 10 and I’m fairly sure it cost me something in the region of AUD$900 when I got it. The battery also lasts about 90 minutes when I’m doing anything useful with it, which isn’t exactly ideal but fortunately power points are in plentiful supply in most civilised countries, airport lounges, and even the aircraft of your better quality airlines.

In computing terms it’s decent but not a gaming rig, although I can and do run games on it – it was the best compromise between features and price available at the time when I got it, which is a situation most laptop users have probably found them in when looking for a new unit.

Intel and their manufacturing partners have realised that laptops are increasingly replacing desktops for a lot of people, especially those in creative or content-driven industries, where they can find themselves working anywhere and needing reliability and efficiency.

The details of Project Athena were unveiled to international journalists at IFA earlier this month, where partner companies including Acer, Asus and Lenovo also showed their Project Athena certified laptops in detail.

The project is built around Intel’s 10th generation processors, with Intel corporate vice president Chris Walker saying the ambitious project had come about from the company’s own research as well as working closely with its partner laptop manufacturers to design laptops which would push the platform into the future.

“With Intel’s unmatched portfolio of leadership IP and technologies, the broad-scale innovation we’re driving across the ecosystem with Project Athena, and deep co-engineering efforts with our partners, we’re bringing next-gen laptop experiences to life,” he said.

“It’s an exciting time for the PC as we celebrate our joint efforts in pushing laptop innovation into the next era.”

A key focus has been battery life improvement. It’s well known that how long a laptop manufacturer claims their battery will run off-charge and how long it actually will (especially when you’re trying to do anything important like ‘work’ or ‘uni assignments’ or ‘curating your social media feed’) can be two very different things which may only have a nodding acquaintance with each other.

Intel are claiming that all Project Athena laptops will feature what they are calling “All-Day Battery Life”,  which equates to more than nine hours of ‘real world’ use; defined as activities like surfing the web, streaming movies, derping around on social media, word processing, business/enterprise software use, watching amusing cat videos on YouTube, and so on.

This is separate from straight video playback, where Intel say will be anything from 16 to 22 hours – and note the laptops will also feature AI-powered upscaling, allowing low-resolution video to be upscaled to something more palatable to modern eyes.

Project Athena laptops will also feature a quick charge function, where plugging it into an AC adaptor for half an hour will give the laptop four hours of battery life – something likely to be welcomed by anyone who’s ever seen their “Warning! Low Battery!” alert flashing at a crucial moment when there’s an unknown time to the next power point.

Connectivity is also important and one of the big features in Project Athena laotps is Wi-Fi 6, which has been described as ‘the biggest advance in Wi-Fi in a decade’. It will allow connection speeds of more than 6 gigabytes per second, which is very impressive but won’t be a lot of use to most Australians since most people are lucky to have a 100mb/s internet connection.

What I found quite itneresting about the unveiling was how Intel are clearly trying to bring laptops closer to mobile phones in terms of functionality. One example of this was an ‘always on’ connectivity, meaning that even when the laptop was nominally asleep, it could still receive e-mails and notifications and alert the user of that fact. While I didn’t see any specifics being demonstrated, it would seem users can select which notifications they want to be advised of and which can wait until they actually open the laptop again – in much the same manner as a mobile phone user can choose what to be notified of and when.

In the same vein, ‘instant on’ functionality was also a highlight – the idea that, like a phone, when a user activates it then it will be ready to go straight away. After all, your smartphone doesn’t have to have a little think and make itself a digital cup of coffee every time you turn the screen on, so it’s good to see laptops heading that way too.

For gamers, laptops meeting the certification can run games in, at a minimum, 1080p at 30fps – which might cause purists to angrily sweep their energy drinks aside and declare that might be fine for plebians but isn’t going to cut the mustard with Real Gamers™ – but realistically it will be more than enough for the majority of people, especially those who are buying the laptop primarily for work/content creation and considerably less to use it as an ersatz heater in winter by playing Metro: Exodus with all the settings maxed out.

Also keep in mind that’s a minimum and there are plenty of Project Athena laptops which far exceed the minimum requirement, such as the Asus ProArt StudioBook One (arguably the most powerful laptop in the world), and a host of other gaming laptops from well-known brands including Predator and Republic of Gamers – with more on the way.

According to Intel senior principal engineer Melissa Gregg, the whole idea behind Project Athena was to provide laptops designed for highly mobile and ambitious modern users – especially as ever-growing numbers of users, particularly content creators, entrepreneurs, the self-employed, small business members, and creative industry types needed  a versatile, reliable laptop that would do what they needed no matter where they were.

“More and more people – like journalists – have to do things in unpredictable places all the time,” she said.

Ms Gregg said with many users being physically moving around the world and working wherever inspiration struck or their job required it, they needed a laptop which would do whatever they required it to, without the user necessarily needing to understand the technical specifications themselves.

“From an engineering perspective, I want to be able to trust that this laptop has met certain requirements I personally don’t need to understand, but because I understand Intel and understand who they are partnering with, and they (Intel) set this set of requirements and specs, I can understand that even though I’m not an engineer,” she said.

“Being user-first is historically important for me as an advocate for the ordinary person and the person I want tech to empower;  being able to have a programme that is prioritising things a real user can understand.”

Project Athena certified laptops will start landing on our shores from October, with Acer, Asus, Dell, HP and Lenovo – as well as related gaming counterpart brands including Predator and Republic of Gamers – among those with offerings featuring the certification.

Besides the obvious heavy-hitting gaming laptops on show, some of the creative industry/business-focussed Project Athena laptops I saw at IFA really impressed me, in particularly the Asus ZenBook Duo dual-screen laptop,  and the Lenovo Yoga series of multi-purpose laptops (including the C640 and C940) with a screen than completely folds over behind the keyboard if needed.

Based on what I saw, played with and heard at IFA, I am confident Project Athena represents a big push forward in laptop technology and will offer real benefits for laptop users, especially those whose find themselves working in mobile or unusual situations – and it’ll be interesting to see the impact they have on the laptop market as units start appearing on shelves in the run-up to Christmas.

Royce Wilson attended IFA 2019 as a guest of Intel