Neymar Jr Has Kicked Things Off In Fortnite

AS previously reported in the announcement of Fortnite Chapter 2 Season 6, Primal, International Footballer Neymar Jr will have his own in-game skin and cosmetic accessories. Neymar Jr joins other pop culture icons such as Lara Croft and Rebirth Raven in this seasons lineup via Fortnite’s Battle Pass. 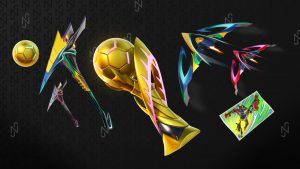 To unlock Neymar Jr’s look, players will have to complete a series of quests within the Battle Pass which will be available as of April 28. The quests will unlock items such as his outfit, Shh emote, SoccerBall Emote Toy, Neymar Jr Banner, a Neymar Jr-themed Metadore Loading Screen, Jola Trophy Back Bling and Strike Pickaxe. Other Neymar Jr cosmetics up for grabs include the various versions of his outfit, including his Exhibition set, which be be unlocked via Epic Quests once all of the previous quests have been completed.

However, the Neymar Jr festivities don’t end there. Players will be able to compete in The Neymar Jr Cup on April 28 for a chance to win an IRL prize. The winner of the tournament within the OCE will win themselves a custom-designed soccer boot. runner-up prizes include the new Spinner Takes All Emote. A Neymar Jr-inspired Welcome Hub within Fortnite Creative has also been created by community members, which will included a special “Go Crazy Arena” playlist. It features a first to 200 eliminations mode featuring two teams of 8. Using gold earned in “Go Crazy Arena” you’ll bea able to unlock upgrades and bonuses for your team. The playlist will be available from April 27 at 11PM AEST through until 11PM AEST on April 30.