OLD Out and Metronomik have two big announcements about No Straight Roads which should bring music to your ears. No Straight Roads finally has a release date and is making its way to the Playstation 4 on June 30. The musically charged action-adventure game will also have a sweet Collectors Edition which was also revealed recently by Sold Out. 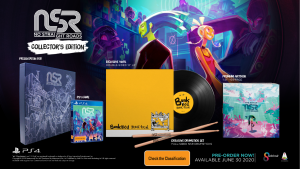 For those who haven’t heard of No Straight Roads, it’s an action-adventure title filled with rhythm-infused combat. It’s about two indie rock band members, Mayday and Zuke, who go up against EDM empire NSR to put a stop to their corruption in Vinyl City.

“No Straight Roads is unlike anything we’ve played before, it’s in-your-face, loud and a pretty crazy game,” said Sarah Hoeksma, Marketing Director at Sold Out Games. “With so much serious news in the world right now, we hope NSR’s quirkiness and originality can bring some much-needed fun and funky music to gamers out there.”

To get a taste of the No Straight Roads soundtrack, check out the video below.