“Observer is a great sci-fi horror game where you play as Detective Lazarski, using augmentations to tap into the unstable memories of the deceased to search for clues.”

Observer is a sci-fi horror adventure game developed by Bloober Team and published by Aspyr. The game was released on PC, Xbox One and PlayStation 4 on August 15, 2017 and most recently on the Nintendo Switch on February 7, 2019. With all the hype around Cyberpunk 2077 from E3 recently, I have been keen to get stuck into some games that feature a cyberpunk theme. I had a look through my Steam list and clicked a few games to watch the trailer. I came across Observer which featured an actor’s face that I recognised. A quick google search informed me the actor is none other than Rutger Hauer. Bloober Team were also the ones behind horror game Layers of Fear, so I was expecting some tense moments in this game. It didn’t disappoint. 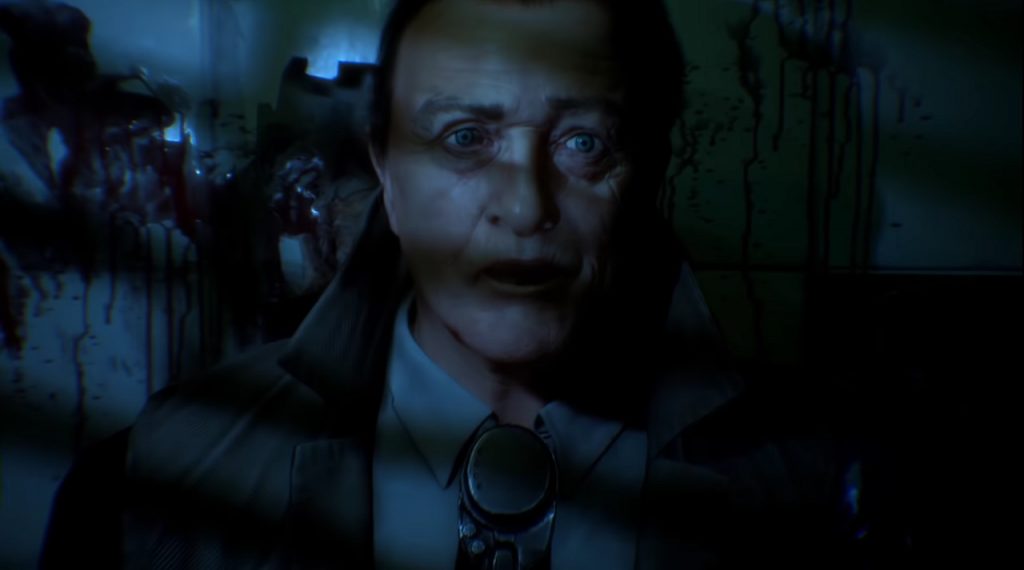 I recognised Hauer from Batman Begins (2005) and the original Blade Runner (1982), having just recently watched it and 2017’s Blade Runner 2049. Blade Runner was one of the inspirations behind the game, which is set in the year 2084 in a dystopian Krakow, Poland. The world has gone to ruin due to a digital plague called the Nanophage wiping out thousands of augmented people. There was also The Great Decimation War which wiped out many of the world’s corporations. In the aftermath rose the Chiron corporation who’s advertising is everywhere in the game and their technology is the basis behind the Observer’s abilities. 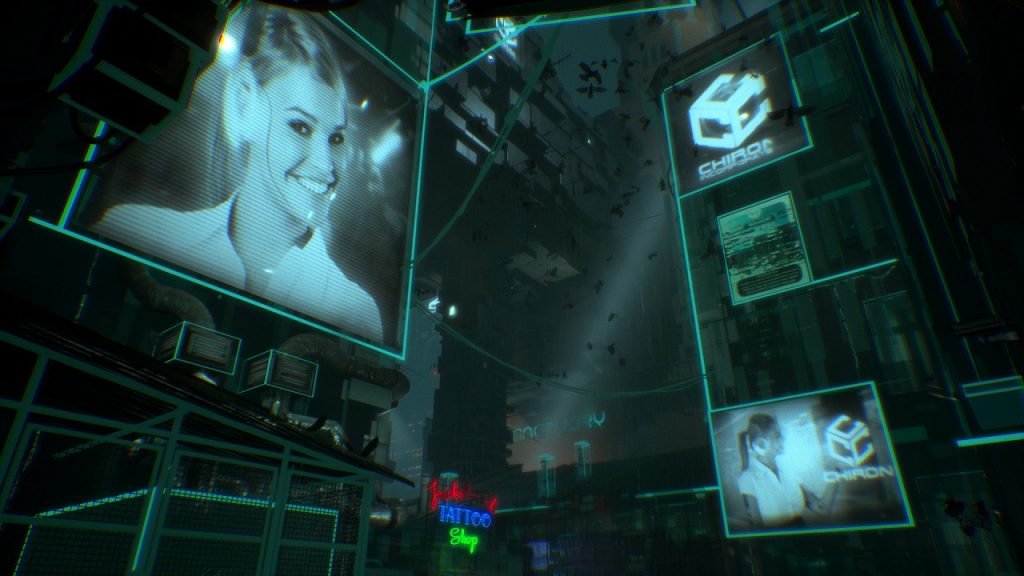 You play as Detective Daniel Lazarski, voiced by Hauer, as an Observer, a specialised unit in the KPD (Krakow Police Department). Observers have augmentations that allow them to analyse and highlight certain objects in the environment with either Electromagnetic Vision or Bio Vision. You can also hack into brain implants of the deceased using a Dream Eater to see their last visions before they die. This allows you to piece together the circumstances leading up to their death and hopefully gives you some clues to investigate further. Lazarski starts in his squad car where he receives a cryptic call from his son Adam, whom he hasn’t seen for years. It sounds like Adam needs help, so using the car’s computer, you triangulate the call to a tenement building in a Class C district. Class C citizens are ones that are heavily into drugs and are destitute.

Once at the building, the caretaker gives you the location of a Leon Grazinski, the name of the caller ID you traced. He’s in apartment 07 on the ground floor and from here commences the main gameplay loop. You need to find specific locations, talk to other tenants in the building and use your detective skills to progress your lines of enquiry in search for clues to find Adam. The corridors are dark with flashing neon lights and green lines and shapes. Even though it’s a physical building, it feels like it’s digital as you walk from room to room with flickering lights, electrical sparks and glowing advertising billboards. 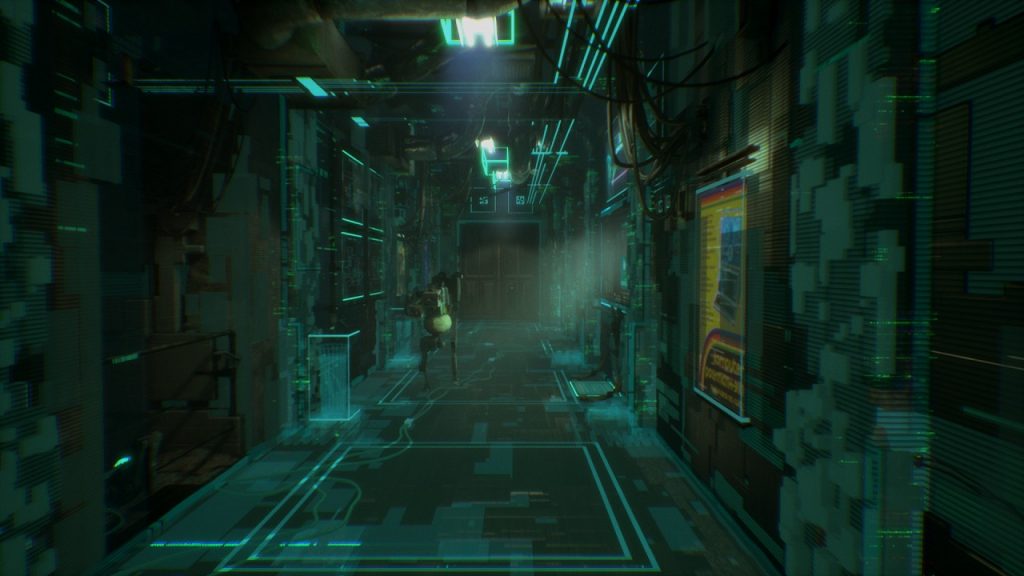 You interact with other tenants via door intercoms and it’s here where Rutger’s voice acting starts to shine through. In between conversations, you go over the evidence speaking to yourself, clarifying your next move and even reflecting on your own life as you interact with all types of strange tenants. You get the sense that Lazarski is a lonely man, working in a lonely job as an Observer. You meet the likes of a parent whose kids are fighting in the background, to a hermit afraid of human interaction yet is highly observant of the comings and goings of his neighbours. There is a large cross section of Class C citizens with some who are helpful, others that are just happy to chat and then some that simply tell you to go away (in much more colourful language).

Upon finding the designated room, you’re faced with a gruesome scene of a body with its head blown off. You immediately think it’s your son Adam, but then your detective instincts kick in and you concentrate on what the evidence tells you. It is here that you find Lazarski is dependent on drug stimulants as the more stressed he gets the more agitated and out of control he becomes. A simple interface allows you to monitor his ‘synchronisation’ and administer drugs when required. 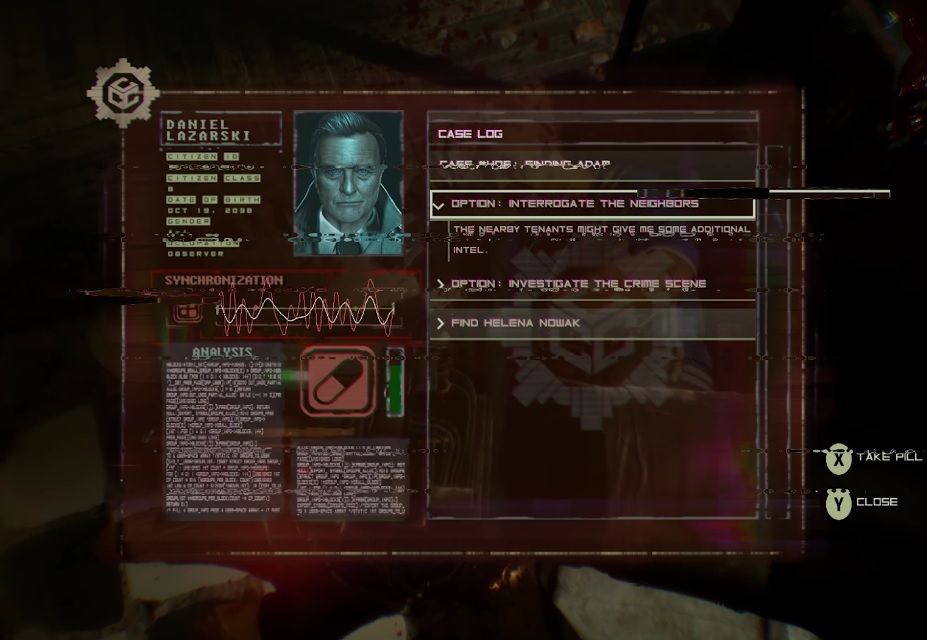 You can use the Bio Vision to scan wounds on the body and blood splatters, as well as using the Electromagnetic Vision to scan any augmentations or chips within a body. The Electro Vision also enables you to scan for computers and other electrical devices within the room. I was able to follow some electrical cables to a security panel that required a pin code. Searching the room, I found a book with the year 1984 on it. Entering this number into the security panel made a section of the roof drop down revealing a table with a computer. Accessing this revealed some story articles and emails that sometimes updated you with new information, and there’s also a mini game called “With Fire and Sword: Spiders” that has 10 levels that you unlock through finding other computer systems.

You find the initials HN on a chip inside the body as well as emails on the computer. You go back to the caretaker’s office which is vacant and access the computer. This allows you to scan the apartment occupants where you find two people with initials HN and note their room numbers. It was here that I had the first of many jump scares in the game that made me glad I was wearing brown pants. The atmospheric sounds coupled with jump-scare moments caused me to tense up. You must open doors manually by holding the mouse button and dragging it open, and from here on I always expected something to jump out at me. As you progress from room to room, you come across more dead bodies and some awful bloody crime scenes. 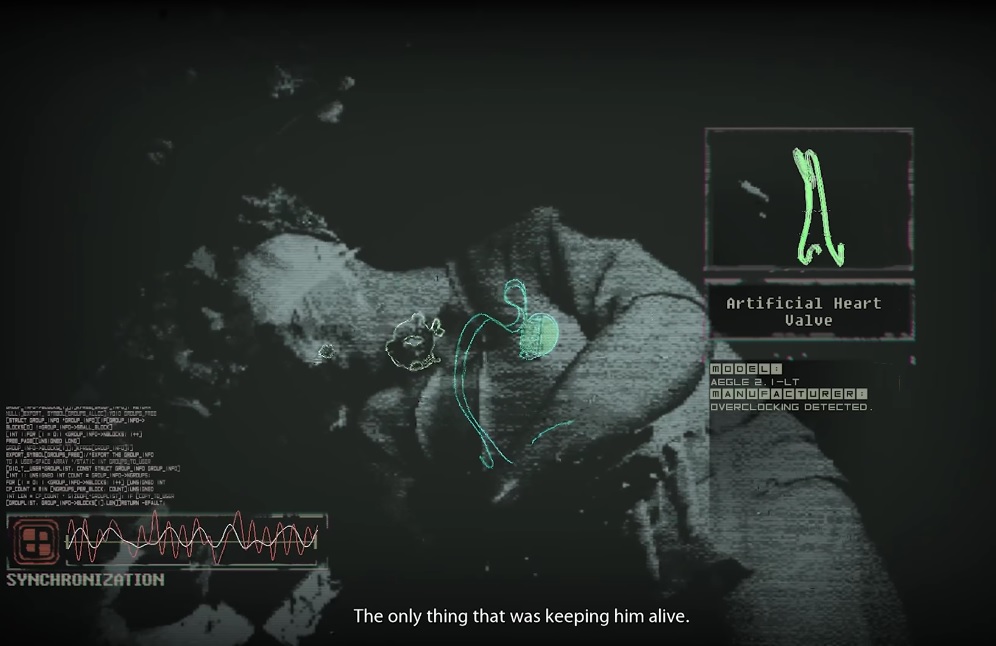 Scanning the bodies usually reveals a brain implant chip that you connect to your Dream Eater which commences ‘neural interrogation.’ You are then integrated into the minds of the dead and faced with psychedelic and sometimes confusing images with sharp static sounds and bright flashing lights. You’re able to navigate through these scenes as the deceased individual, acting out their final moments. As you walk through corridors, windows burst open with shattered glass spraying at you, but then quickly rewind and are normal again. Some scenes had looping scenarios where I had to walk in a certain pattern or go through a door that was shown in a tv screen in the corner of a room. Other scenes had shimmering images of people sitting or standing in the corridors and you walk past them as if you weren’t there.

Each time I jacked into a deceased person, the scenes got creepier and more confusing. Without giving away spoilers, eventually these hallucination scenes featured something that could kill you, so you had to keep playing through it finding ways to avoid being killed. I started to get anxious about these scenes and almost annoyed about having to play through them as they were starting to break my immersion in the story. There was one scene that featured a tv with a power cord that had to be moved around to the next power point to turn power on to the next door. When the tv was unplugged, you would hear a baby crying. As a parent to a 2-year old, I really disliked this stage and was glad to have gotten through it.

Once I got to the closing scenes of the game though, the reasoning behind most of these hallucination scenes made sense to the greater story, and I appreciated why they were done that way. The story had me guessing how the plot was going to unravel, and the revelation at the end was pretty mind blowing giving you a choice of two outcomes. The ending I chose left me thinking there could be room for a sequel, though it could just be one of those endings that leaves you thinking about the impact of the game long after playing it.

In recent news, we heard of the sad passing of Rutger Hauer on July 19, 2019 at age 75. Aside from starring in many movies and this game, he was also the voice of Master Xehanort in Kingdom Hearts 3. His role as Roy Batty in Blade Runner is arguably his most memorable and his voice acting and character were brilliant in Observer. Below is a fitting tribute to the actor by youtuber Hafrican Jones.

Overall, I gave this game an 8.5/10. Observer is a great sci-fi horror game where you play as Detective Lazarski, using augmentations to tap into the unstable memories of the deceased to search for clues. The story keeps you thinking, not only about how Detective Lazarski progresses each case but delves into his dark past as well. Some of the hallucination scenes dragged on a little too long and I just wanted them to end, but I suppose that’s one of the negative side effects of having the ability to tap into a dying strangers’ final moments. There are some disturbing scenes in the game, so fair warning.

This review utilised the PC version of the game through Steam with 8 hours of gameplay. It’s also currently available to play through Xbox Game Pass.