Before diving into this review, Oddworld: New ‘n’ Tasty isn’t exactly new. Not only is this a remake of the original Oddworld: Abe’s Oddysee but this review covers the Nintendo Switch port of said remake from 2014. As for the taste, Oddworld was very bittersweet in my personal opinion. As a lover of both platformers and puzzle games I surprisingly found it difficult overall to enjoy myself.

If you’re a gamer born in the 90’s, there’s a good chance you’d have heard of Oddworld or it’s blue protagonist, Abe. I wouldn’t exactly call Abe an icon but he was definitely a well known character, particularly in the early Playstation era. I personally never played the original Oddworld which came out in 1997 however I have dabbled in one of the many sequels that followed. Don’t ask me why but when I first think of Abe I think back to his signature character trait: farting. Not much has changed since.

Told in the style of a rhyming childrens book, Abe’s story begins at RaptureFarm. A factory that manufactures meaty treats where Abe and many others of his slave species work. However as business declines, head honcho Molluck the Glukkon has figured out a solution to save the company. He wants to create a new treat called New ‘n’ Tasty. But what will New ‘n’ Tasty be made up of? None other than Abe’s species, Mudokens. Abe along with hundreds of his Mudoken co-workers are in grave danger, but especially Abe as he was caught listening in on Mollucks evil plan. 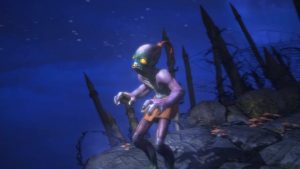 From here you must escape the factory while rounding up as many Mudokens as you can and guide them to safety. But while Mudokens can be saved, they can also be killed so remember to take care of your Mudoken brethren. Each one of their lives count and will matter later on. It’s kind of like a mixture of saving Little Sisters in Bioshock meets Lemmings.

Although it was released seventeen years after the original, New ‘n’ Tasty stayed true to Abe’s Oddysee. From the beginning cutscene you could tell this was originally a game from another generation. Gameplay shares the originals nostalgic 2D style but with a fresh coat of 3D paint. Both characters and environments still look as if they were all built in the 90’s, just in hi-definition. Many of the character sprites also look exactly the same as their original counterparts. The overall game design succeeds in keeping that mid-90’s video game vibe and feels really nostalgic.

While I was pleased with New ‘n’ Tasty’s overall aesthetic, it’s gameplay was at times not as pleasing. Going in as an OG Oddworld virgin, I was expecting a chill puzzle platformer. The reality however only half met my expectations. As the game started off relatively simple, frustration started to kick in as I reached the next part of the game. So much so that I had to put my Switch down multiple times just to mentally give myself a break. 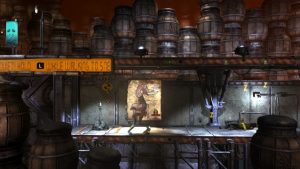 It wasn’t so much the overall gameplay difficulty that caused this although there were moments when death became an ongoing occurrence. It got to the point where I genuinely thought the game was unfair. After calming down I realized that a lot more patience was needed. Most of my frustration though came from the puzzle solving aspect. I love puzzle games and the satisfaction that comes with it. But this became a whole new level of difficult for me.

Progressing through Oddworld: New ‘n’ Tasty requires you to be on the ball at all times. There a method to the level designs madness and I both applaud and curse the developers for this. Most if not all of the enemies you come across are extremely deadly. You’ll have very little to defend yourself with most of the time from their fatal attacks. Through some well thought out puzzles, you have to find creative ways to get from point A to point B alive. At first this was an easy task just from simply observing my surroundings. But as previously mentioned this became more difficult as the game progressed.

The majority of the time when reviewing games there’s very little to rely on when you’re stuck between a rock and a hard place. And I’m a stickler for trying every single possible solution before reaching for help. However this is a game from 2014 and frustration got the better of me. But I’m still kicking myself for it especially since it was a not so obvious solution that was actually right in front of me.

As I progressed through the last half of Oddworld: New ‘n’ Tasty, my frustration breaks became less frequent. I started to have fun and got myself out of sticky situations easier. I’m still unsure if it was an intentional decrease in difficulty or because I was able to better adapt myself to my surroundings. Either or, Oddworld felt as if it had a delayed sense of satisfaction. It takes a lot of patience to really get into but once you get over the hump you’ll gain a lot more motivation to power on. 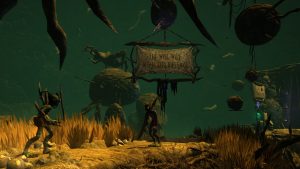 As a Switch port, the only issue I had was playing in handheld mode. Nothing to do with performance but more so the joycons. There were many moments I found myself having to move quickly to stay out of danger. And using the joycons during these fast moving situations wasn’t ideal. Due to the joystick size, my movements didn’t feel as precise as they would using a controller. That’s not to say it’s entirely unplayable undocked but you’ll probably have less deaths while using a controller.

Knowing what to expect and how to progress through levels would make a second run of a lot easier. But that won’t be happening for a while. Oddworld: New ‘n’ Tasty is a well thought out puzzle game that can also be brutally frustrating. If you’re a sucker for punishment, this might be right up your alley.

Oddworld: New ‘n’ Tasty is available now on Nintendo Switch and can also be found on Playstation 4, Xbox One and Steam.