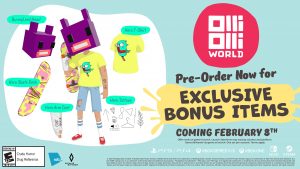 ROLL7 and Private Division have finally announced that OlliOlli World will be launching early next year. The third game in the OlliOlli series will be launching digitally on February 8 for Playstation 5, Playstation 4, Xbox Series X|S, Xbox One, Nintendo Switch and Steam. The launch of a physical edition is currently unknown. Also announced was the games price point of $44.95 AUD as well as future plans for the skateboarding platformer and a new gameplay trailer which can be found below.

Two expansions for OlliOlli World have been confirmed for next year. The first expansion, titled Void Riders, is schedule for release in mid-2022 with an untitled second expansion expected to release later in the year. Void Riders will add a new biome, levels, characters and customization items. Pricing for the expansions is unknown, they will however be included as part of the OlliOlli World Rad Edition for $66.95 AUD. The Rad Edition not only comes with the base game and both expansions when released but also a special “Close Encounter Skate Deck” cosmetic item.