IN the space of 6 days, the physical release of the Ori series on Nintendo switch along with iam8bit’s sales helped raise a whopping AUD$75,000 to go towards supporting Rainforest Trust. That means this non-profit organisation is able to preserve and protect 29,000 acres of rainforest globally. Which to put in perspective is Hamilton Island x 24 or 90 lengths of Bondi Beach. The teams at Moon Studios, iam8bit and Skybound Games pledged all sales made from Nintendo Switch physical copies of both Ori games and iam8bit’s sales between the 8th and 13th of December last year would go directly towards supporting Rainforest Trust.

“As the publishers of the Ori series on Nintendo Switch, we could not be more thrilled by the outcome of this drive,” said Jon M. Gibson and Amanda White, co-owners of iam8bit. “Between Moon Studios’ eco-positive storytelling and Rainforest Trust’s incredible work protecting rainforests around the world, we are humbled by the fans that helped us raise AUD$75,000 for Rainforest Trust’s cause, and honored to partner with such an organization.”

Donations made directly to Rainforest Trust can be made here. 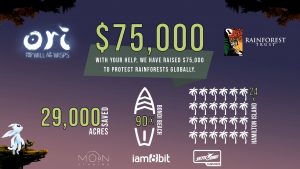