“OTTTD is a strategic ball of fun with only a handful of  truly stressful moments.”

Over the years there have been many games in the tower defence genre that failed to truly stand out among the rest. That was until OTTTD aka Over-The-Top Tower Defence came along to show us how a tower defence game is really done with a couple of fun extras. And as the name suggests, things get a little crazy in the latest title by Aussie indie developer, SMG Studios.

OTTTD isn’t your typical tower defence title where the priority task is to build towers, place them strategically and fight off wave after wave of enemies. All of those elements are obviously still there but it also adds an unexpected element that added more multitasking and fun throughout my gameplay. In addition to towers you also have control of up to 3 troops who can be moved anywhere on the battlefield to fight semi-idly. The 7 different units also come with unique weaponry and special abilities that help manage attacks on the battlefield that towers are unable to deal with by themselves.

Like towers, these units are able to be upgraded but much differently to their much larger counterparts. Upgrades are made via an RPG like system. Their load-outs including weapons, armor and abilities can be fully customized. There’s also a “skill tree” system with upgrades bought using skill points however it doesn’t exactly flow like others. Some skills, especially the unlockable special abilities, felt a little all over the place to begin with. Without much of an order to follow, I was able to quickly unlock my specials first and upgraded from there. Being given the ability to permanently upgrade units makes the world of a difference to progression and helped with changing my strategy if I was stuck on a mission, greatly reducing my rage. However using these units to their full potential didn’t happen straight away.

It took several missions for me to comfortably move my units around the battlefield and away from guarding the main HQ while managing my tower upgrades/repairs. But once I did it felt as if the gameplay had almost changed completely by giving me a lot more to do as well as change up my overall strategies. I also felt more useful as I was no longer relying solely on idle attacks which most times never got the task done easily. 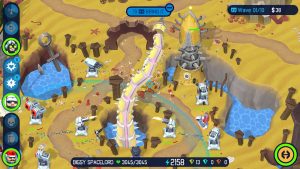 Like other tower defence games, gameplay has a lot to do with strategy and OTTTD definitely isn’t short of it. Waves come with a variety of small and large enemies. And no matter what size, some can be very powerful and very strong. It didn’t take long for me learn what tower worked best for each enemy and to adapt accordingly. And while most fights felt the same through the campaign, the developers changed it up slightly with some cool boss fights as well. The highlight mission for me though was only being given access to a single tower position. It was a true test of my ability and I’d be lying if I said I didn’t break a sweat during my multiple attempts.

The action doesn’t stop at the campaign though with an endless mode which can be accessed as you progress through the campaign. Rewarding you depending on how far you push through infinite waves of enemies, it’s a more chill mode in my opinion. There isn’t the stress of making sure to defend your HQ to get through to the next mission. It’s also good practice to see how fast your fingers can work in high stress situations. 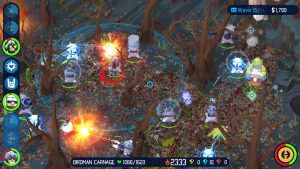 Reviewing this on the Nintendo Switch I was surprised there were no touch screen features. However the control scheme made managing towers and troops very easy without it. Using all 4 shoulder buttons, I could quickly flick through each tower/troop to check on repairs and/or possible upgrades. Though during those moments where I had to manage more than a few towers, I eventually found it myself moving my view finder around the map instead. The only gripe I have about this though, particularly with larger waves, were the tower HP bars being covered up by enemies or other objects. I also came across a glitch a couple of times where I was unable to repair a downed tower even when I had the funds available. At one point completely removing said tower didn’t help since it wouldn’t do that either. That problem however mysteriously fixed itself though.

Overall, the game is very fun and doesn’t take itself seriously. Along with over-the-top antics the game is quirky in nature. It’s futuristic other-world setting shows off a wide variety of environments. Enemy creatures come in every shape and form from robots to zombies to giant skulls. The over-the-top voice acting and mission statements also come with some quirky humour.

With all of these elements packaged together, OTTTD is a strategic ball of fun with only a handful of truly stressful moments. But with the help of its RPG elements, it’s hard to have a rage attack when you’re having this much fun.

Over-The-Top Tower Defence is available now on Steam and Nintendo Switch and I give it 9 out of 10.