DAY 2 of the 2021 Final Fantasy XIV Digital FanFest kicked off with an opening ceremony as well as a special Live Letter from the Producer. However, it was evident from the live chat that there were many fans expecting more news about the next expansion, Endwalker. But, like previous FanFest’s, this Live Letter was going to be about content for the current expansion.

Final Fantasy XIV Online Director and Producer, Naoki Yoshida, explained at the beginning of the presentation that there wouldn’t be any news in regards to the new expansion. However, plenty was shared about the upcoming Patch 5.55. The new patch will cover part 2 of the Death Unto Dawn story which began in Patch 5.5. And it looks like we’ll be getting it sooner than we all thought.

Yoshida, aka Yoshi-P, announced that Patch 5.55 will launch on May 25. He also revealed that there were even plans to release Patch 5.55 the day after tomorrow. But because of FanFest, this plan was ultimately scrapped. Yoshi-P knew that they would be way too exhausted to deal with a Patch launch immediately after the 2 day event.

The main additions to Patch 5.55 will mainly wrap up a lot of loose ends before Endwalker launches on November 23. These include the conclusion of the Death Unto Dawn main scenario content from Patch 5.5, Save the Queen questline and YoRHa: Dark Apocalypse epilogue quests.

However, the Save the Queen questline was mostly covered as opposed to the others mentioned. Save the Queen will wrap up its story arc, introducing brand new battle content, rewards, weapon upgrades and resistance cap.

New battle content will include new skirmish’s, duels & critical engagements as well as a new battlefield called Zadnor and a new large-scale assault called the Dalriada. Specific details about these and the story content weren’t given, the latter especially since Yoshi-P was worried that saying too much might spoil it. Which isn’t the first time this has happened during the FanFest weekend.

Yoshi-P did however show images of boss fights from the various battle content. He also revealed some of the rewards which can bet obtained including an armor set, outdoor furnishing and a two-seater airbike. 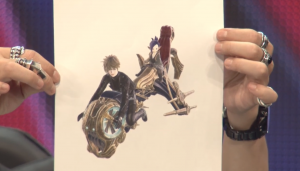 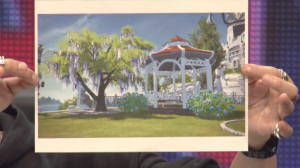 In regards to the resistance cap, this will be increased from 15 to 25. Yoshi-P also revealed how players will be able to used up mettle once they’ve reached the rank cap. Once you’ve capped, you’ll be able use your mettle towards Resistance Honors. There are three types of Honors you can spend your mettle on which will all increase certain attributes within the Save the Queen content. These include max HP, damage dealt and healing potency.

With Patch 5.55 and Endwalker being so far between, Yoshi-P suggests playing through this content while we wait for the next expansion. However, he also suggest that players take it on slowly since it’s going to be such a grind to do and he doesn’t want players to be burnt out.

Of course, during this time you’ll also be working toward upgrading your weapon. The latest batch of weapon upgrading unlocks when unlocking Zadnor. According to Yoshi-P, the latest Resistance Weapon upgrade will be slightly better than the weapons from the latest high-tier raid, Eden’s Promise (Savage), but will also be a tough process. However, Yoshi-P also says that with every other you weapon you after that one, the process will become easier.

Apart from the Save the Queen news, Yoshi-P also announced that the Playstation 5 version of Final Fantasy XIV Online will come out of open beta and officially launch the same day at Patch 5.55. As someone who’s been hands-on with the PS5 version, I can confirm that it’s a very big upgrade with faster loading times between areas and 4K visuals.