After three years since Persona 5’s launch in the west, it’s time to start sending out calling cards once again. Persona 5 Royal reunites us with our high school friends along with a brand new face. However Personal 5 Royal isn’t completely different game. It’s a return to the original story with a fresh splash of features and dash of added story content. Before continuing on, Persona 5 is a very large game to begin with, clocking in at around 100 hours in length. Being one of the largest games I’ve tackled reviewing wise, I’ve found it best to split this half. For now with the 40 hours I’ve already played I’ll cover the game itself along with what I’ve uncovered so far. I’m yet to scratch the surface of the additional story to Persona 5 Royal. All I know is our new friend at school isn’t telling us everything about herself and there’s a new school doctor to visit.

What makes Persona 5 Royal different to Persona 5 you ask? It’s kind of like an overall update to the entire game in regards to gameplay elements/features as well as the story. I wouldn’t class it as an expansion or DLC as there are changes made through out the entire game as opposed to just being post-story content. It’s also referred to as a separate game to Persona 5 meaning there’s no way to continue on using Persona 5 Royal with a P5 save file. 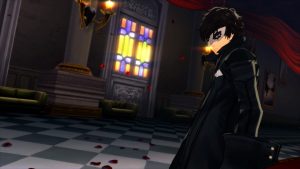 For those new to the franchise, Persona 5 is a story driven modern JRPG with fantasy elements and a decent sized scoop of life simulation. Developed by P Studio and Atlus, P5 tells the story of delinquent teenager whose shipped off to stay with a volunteer guardian in a new city. He may be the new kid but everyone at school already knows who is and it doesn’t take long for the rumors to start spreading. However there’s bigger problems at hand with sinister and corrupt activity going on behind closed doors. So what does a kid with a background of getting himself involved in things that don’t concern him? He gets involved. How is another story which I’m going to try my best in explaining.. You learn that everyone wears a mask deep in their heart. An armour per se. This is what’s called your Persona and it only comes out in the Metaverse, an alternate world with access to distorted hearts. The Metaverse only opens up when the “Palace” of said distorted heart’s discovered. Your peers only have one Persona whereas you get to carry multiple with each one holding different abilities that are used in combat. Think of them like Pokemon. It’s a similar concept of using Personas to fight other Personas carried by Shadow guards in the Metaverse. After coming to terms with the mask you wear you become a Phantom Thief, stealing hearts of those so corrupt they can’t see how distorted they are until their “treasure” is taken away from them. The phantom thieves slowly start growing as more of your peers reveal their own masks.

Combat in Persona 5 Royal reminded me of the many reasons why I fell in love with the P5. It’s a mixture of turn based combat and figuring out who’s weak against what attack. This comes back to the similarities of Pokemon. While fight tactics are usually changed from time to time, it does reach that point of turn-based fatigue when the difficulty sits at the same level for too long. Leading to the same move patterns for multiple fights. Luckily this feeling goes away faster than expected. While keeping the majority of the combat the same, Persona 5 Royal adds in a Showtime move where two party members can pull off a powered-up attack on your enemies. This only happens under certain conditions so it isn’t as handy as the always powerful All-Out Attacks every party member jumps in on. It’s been a few years since playing Persona 5 so my memory is a little shot but this time around it felt as if I didn’t have to sweat as much during boss fights. I’m not sure if fights have been balanced or if I’m just less of a scrub than I used to be.

While Palaces are large dungeons for more serious cases of distorted hearts, the Momentos is an area for the minor cases. Similar to a dungeon crawl, it’s a more casual combat experience that’s also had an upgrade in Persona 5 Royal. P5R rewards you more as you progress through Momentos and adds a new NPC to purchase items using a separate currency collected throughout. 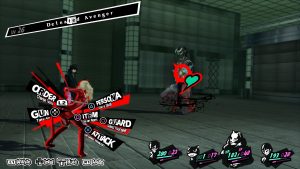 But you don’t spend all your time fighting shadows as a Phantom Thief. The general public know of the Phantom Thieves but they don’t know of your true identity. So when you’re not stealing hearts you’re just a regular high school kid. A kid whose juggling studying for the next exam, a part time job, dining out with friends, reading books, recreational activities and growing relationships with those close to you. It brings a whole other element what’s expected of RPG’s. The life simulation elements can become overwhelming as more activities become available. But once you start learning which activity is best during what day/time and what core personal traits should be worked on it’ll become second nature.

Gameplay aside, playing Persona 5 Royal has made me become OBSESSED with the soundtrack and visual aesthetic all over again. The soundtrack is of the catchiest I’ve come across in years and will have you humming the songs for weeks! I’ve also become guilty of once again repeating the same obnoxious word that’s said during combat: “PERSONA!!” The illustrated aesthetic is the real winner of P5R. Working mostly with red, black and white, illustrated menu screens really pop and work beautifully with the cartoon-like 3D models. Both types of art media are blended together really well to the point where the 3D starts to look like 2D. Transitions between gameplay, menu screens and everything between are the cleanest I’ve seen in any game making for a really smooth flow throughout.

So far Persona 5 Royal feels like a more rewarding experience than that of P5. However I can’t wait to find out more about our two new additions to what’s already a standout installment to the franchise. Look out for final part of my review where I’ll discuss more about the new storyline additions.

Persona 5 Royal is out on March 31 for Playstation 4.