Known best for being a turned-based JRPG, the Persona series haven’t been shy to change genre’s. The Persona Dancing series of rhythm games is a prime example of this. Incorporating the lovable characters of Persona with the games memorable and catchy soundtrack was a far cry from the series’ core gameplay. However, Persona 5 Strikers returns the focus on combat but also gives it a new flavour.

Originally named Persona 5 Scramble: The Phantom Strikers, Persona 5 Strikers was originally released in Japan in February 2020. Like the previous Persona 5 games, it’s taken a little longer for fans in the west to get their hands on it. Set 6 months after the events of Persona 5, our protagonist Joker – leader of The Phantom Thieves – returns to town for the Summer. But spending the Summer with the rest of the gang is going to be far from relaxing.

Bizarre yet somewhat familiar things begin to happen as citizens start to act out, as if they’re under mind control. Or have had a “change of heart”. This catches the attention of the police department but also makes The Phantom Thieves suspects. Joker and the rest of the gang however also decide to investigate the situation themselves, sending them on a Summer road trip of a different kind.

Surprisingly, Persona 5 Strikers puts in the same amount of efforts to tell a story as it would in the core franchise. Inititally I was expecting there to be a whole lot of action and little story on offer. However they didn’t dissapoint, delivering plenty of spoken dialogue and animated cutscenes. Although I did notice that story themes in P5S were tamer and less confronting than those in Persona 5. Which at the same time isn’t a bad thing either.

If you’re new to Persona 5, it’s not a requirement to know any of its story so far. The story in Persona 5 Strikers is an entirely new plotline. There are references to some things contained in Persona 5 but can easily be followed without prior knowledge. 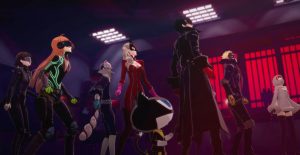 Persona 5 Strikers also introduces a new member of The Phantom Thieves, Sofia. Sofia’s an AI searching for the true meaning of what it feels like to have a heart who, in the real world, lives inside the Jokers phone. However her “physical” form comes to life in the Metaverse.

Unlike other core Persona games, Persona 5 Strikers uses hack’n’slash combat instead of a turn-based system. I wasn’t sure what to expect going into P5S, but I had some sort of idea. Games like Dynasty Warriors and its respective spin-offs all came to mind. From this I knew that it was going to be a very different gaming experience than the rest of the Persona franchise. But while I thought I was comparing apples to oranges, it was more like comparing Granny Smith to Pink Lady. Same fruit, different flavour.

Surprisingly there are a lot of similarities between Persona 5 and Persona 5 Strikers and it mainly came from how the game’s presented. It looks exactly like Persona 5 in every possible way, right down to the UI and HUD. The same catchy soundtrack is also present with a couple more fresh tracks thrown in. Followed closely by its art style, Persona 5’s soundtrack has been one of my favourite components of the game. Overall, you’d honestly be confused as to which game you were playing unless you entered an enemy encounter.

The combat system in Persona 5 Strikers is obviously a lot more fast-paced than the traditional turn-based system, leaving me a little overwhelmed to begin with. In all honesty I wasn’t sure what I was meant to be doing in terms of strategy before I found my bearings. The same actions from Persona 5 still exist – melee attacks, shooting, using items, summoning Persona’s and character swapping – which I put no strategy towards and used at random.

I started to ease into the combat more and more after a few enemy encounters. But my fighting style didn’t exactly match with the speed of hacking and slashing. The same strategy in Persona’s core games are used in P5S. Fighting shadows is more efficiant when matching your Persona’s abilities with an opponents weakness. This is where I started to do a whole lot of stopping and starting mid-combat. 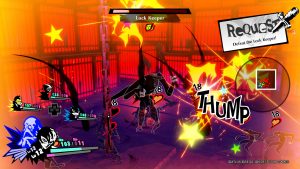 With this style of combat in mind, I’d only relied on my Persona’s and the occassional use of guns. It definitely affected the pace of the majority of fights but also led to some easy victories. Only a small handfull of encounters stand out where that were more melee focused where using Persona’s were useless. Apart from that, the only times I found myself smacking enemies around were during timed hoard encounters and whenever I ran out of SP to summon Persona’s with. But for most part, the key to victory stays the same.

The combat still feels fresh for the franchise but also same same. The only difference is you’re able to move around and no longer have to wait your turn. Some of the boss fights though do require fast fingers. However, apart from one or two encounters, they somewhat lack a certain amount of strategy I’m used to from the core franchise.

Combat similarities also apply to Palaces, but for story purposes these are called Jails. Jails are explored exactly like Palaces, but require less planning. Unlike Persona 5, time doesn’t pass everytime you exit a jail. Which also made Jail exploration a lot easier as you could jump out and jump back in again refreshed without consequence. None the the core franchise’s organization and planning is brought over to P5S, giving more focus on the combat and story while also leaving me less stressed.

This also means there are less activities to take part in outside of Jails. While P5S may look and feel like Persona 5, much of the JRPG aspect has been removed. The Bond system between characters is still used but is implemented into the combat system. However you can still shop for items and even cook meals to use in combat. The lack of activities also makes for a much shorter game, clocking in around 50 hours of playtime. However there are plenty of Requests for you to get distracted by which will sometimes offer big rewards.

What I expected coming into Persona 5 Strikers was a lot different to what I got out of it. Although there’s a slight change in genre, P5S is still very much a Persona game through and through. It feels a little more casual than the core game titles but still comes with a very strong Persona flavour.