In 2018, PGA TOUR rose from the ashes in mainstream gaming by featuring in The Golf Club 2019. HB Studios partnership with the golf brand has since lead to the first official PGA TOUR title in five years. Joining forces once again with The Golf Club 2019’s publisher 2K, HB has given the franchise a breath of fresh air with PGA TOUR 2K21. But while it does move away from The Golf Club as its own sporting franchise, it sort of feels same same but different in some ways.

Early on, I felt a sense of familiarity with the game already. As soon as I arrived at the main menu and started navigating, it was as if I was playing The Golf Club 2019 with a coat of fresh paint. The two share a very similar layout while also sharing game modes/features. However it’s new sleek design gives it that big-name franchise look. 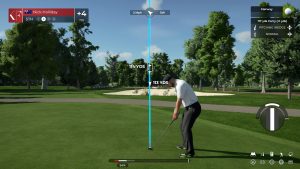 Before you get to hit the green, the game gives you a few quick lessons as well as some personal pointers. This is a big help for beginners as well as returning golfers. PGA TOUR 2K21 might feel familiar but it also plays a little differently. Taking the core basics of gameplay mechanics from The Golf Club 2019, PGA TOUR 2K21 also adds gameplay features which create a new level of accessibility for both experienced and beginner golfing gamers. The right aim, club and power of your swing are all essential. But relying solely on these in the past created a slight learning curve. But with the addition of new tools/mechanics, it makes skill-sets such as putting and ball control worlds easier.

The addition of the Putt Preview sky rocketed my putting game to astronomical levels. After a while I stopped using it as an immediate go-to tool on the green. Instead, I’d aim my putt on my own and see how I’d fair with the Preview tool. It’s one of the best on-going learning tools found in-game and also goes hand-in-hand with the return of the original golf game staple, the Power Bar. The Power Bar takes the guessing game out of distance control whether you’re on the green or the fairway, again flattening the learning curve for inexperienced players. More advanced shots such as Fade and Draw shots can now also be executed for even greater control. However I’m not even close to being a pro at those just yet. But with all of these tools on offer along with the beginning lessons, PGA TOUR 2K21 definitely sticks to their word about golf being for everyone.

As previously mentioned, PGA TOUR 2K21’s modes on offer are very much the same as The Golf Club 2019. The spotlight feature for Golf Club was the Online Societies and makes a return to PGA TOUR 2K21. This is where players could either create or join a virtual golf club with other players online. Joining/Tournament fees can also be implemented as well, giving it an almost realistic club feeling. Other multiplayer features are available such as match-making and playing locally or online with friends. Since I was one of the lucky few to have early access to PGA TOUR 2K21, there was little in the way of fully experiencing Online Societies. Match-making also took way too long to find someone else to play with. There are multiple game modes to choose from including Stroke, Skins and Scramble to name a few. Free Play modes can be played either with others or ghosts. However, I had a hard time trying to find the option of ghosts to play with. I tried playing Scramble with me, myself and I on one controller. My patience wore thin doing things four times over but it’s a mode I’d love to try out with three other friends.

Personally, as an entirely solo option, the PGA TOUR career mode is of course the standout mode for this title. But before jumping in, per typical 2K fashion, you create a fully customizable MyPLAYER character before teeing off. Height, weight, race, gender, eye colour, eyebrows, cheeks, nose bridges, chins and more are covered. While I do appreciate the level of customization to get my MyPLAYER to look almost like me, I was a little concerned as to why their hands look like this. (It looked worse on my TV screen.) 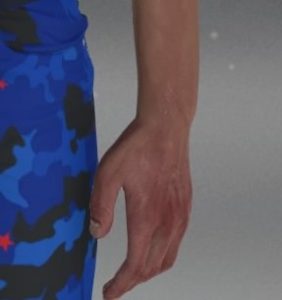 It looks like I have a bleeding thumbnail on top of looking like I just beat someone up before the tournament. Dodgy looking hands aside, I was still able to make my MyPLAYER look dapper in leading apparel brands like Tattoo Golf, Polo Ralph Lauren and adidas to name a few. I ended up mixing and matching to create this black and bright green number. 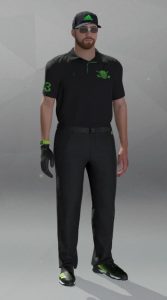 Stepping into Career mode this time around feels like it has more substance. It adds more features than The Golf Club 2019 giving it more of a competitive edge. You can start at any point of your virtual professional career, whether it’s from the bottom or straight to the PGA TOUR itself. But it’s not until you get to the TOUR where you’ll be offered sponsorship’s and create Rivalries with other pro golfers. This is also where I felt like I was putting in real effort into my game. Sponsorship’s allowed me to work towards different goals instead of just competing in rounds of golf over and over again. With opportunities to work with both apparel and golf club brands, I found myself steering more towards being rewarded with a new set of clubs rather than building my wardrobe. It’s little things like working towards unlocking these rewards that break the Career grind up a bit.

Rivalries however worked a little differently in reality as opposed to what I was expecting, apart from the reward system which is very much the same as Sponsorship’s. With Rivalries you go up against 12 pro golfers including PGA TOUR 2K21 cover athlete, Justin Thomas. As you play through each round of the PGA TOUR, you climb the ladder of pro golfers by competing against their different golfing stats. I was expecting something more along the lines of doing better than them in one round or better than every one of their individual stats. However it’s more of case of being able to repeatedly beat the same stats until you gain enough points to overtake them on the ladder. While I’m yet to reach Justin Thomas, who sits right at the top of the Rivalries ladder, I haven’t found Rivalries to be much of a challenge so far.

Career mode also allows you to play on some of the nicest looking courses I’ve seen in a golf game. PGA TOUR 2K21 course designers also took 4K/6K footage from 15 officially-licenced TPC courses and recreated them in-game. There are also a few familiar courses that were also featured in The Golf Club 2019. 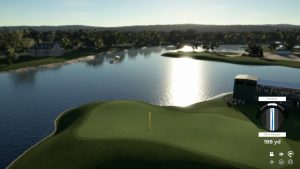 However there is one main flaw about Career mode which also affects some other areas of the game and that is the Internet requirement. I’m not even playing against other players online in Career Mode yet the game still forces me to have a network connection. This was also something found in The Golf Club 2019. While I would look at that as more of an online game experience, I don’t think the same of PGA TOUR 2K21. Especially when it’s not necessarily needed during a solo campaign.

In addition to becoming the best golfer out there, you can also be an aspiring Course Designer. This creative mode makes a return giving you access to the same tools the games very own course designers used. While most aspects of Course Designer are easy to learn, it took me a couple of courses to get the hang of it. There were a couple of issues I noticed including water areas being a hassle to create and bridge ends not snapping to other parts properly. Hopefully issues like these are fixed in the future as well as the addition to more water-based animals. I would have loved to put some dolphins in my tropical watery 9-hole course. Instead, I opted for Koi fish and bogged buggie topped with a partially sunken private jet. You can design these courses as over-the-top as you want. It’ll be interesting to see what others are capable of creating when more and more courses are shared online. Previously created courses can also be imported over from previous The Golf Club titles.

So does PGA TOUR 2K21 feel like an upgraded version of The Golf Club 2019? Kind of. In a good way though. Understandably it’s hard when both titles were made by the same developers. But after walking away from PGA TOUR games years ago, before it’s past failures, PGA TOUR 2K21 has won me over.