“This visual novel/adventure game hybrid was a roller-coaster of highs and lows particularly in regards to its gameplay.”

Capcom’s classic crime series, Phoenix Wright: Ace Attorney Trilogy, is the latest Nintendo release to not only be given the Nintendo Switch treatment but also across all current-gen platforms. This isn’t the first time it’s been re-released on other platforms either with scattered re-releases through out the last 12 years. As a virgin to the Ace Attorney games, I slowly noticed how my expectations of the game before and during my play-through were pretty different. This visual novel/adventure game hybrid was a roller-coaster of highs and lows particularly in regards to its gameplay.

Broken up into episodes, Ace Attorney Trilogy follows not only separate crimes but also a single connecting background story. Playing a newbie defence attorney, Phoenix Wright has to learn how to play hardball to always prove his clients are innocent. Doing so came with two separate forms of gameplay. While one has you playing the obvious lawyer roll, the other has you playing detective. Even though the latter doesn’t fit your job description, which is also brought up in the game. Along the way you meet some memorable quirky characters, some of whom are friends/acquaintances who will sometimes also help you out. There are also rival lawyers who make regular appearances in the courtroom. Constantly intertwining these characters and their stories throughout each episodes plot line kept me more interested in the story as opposed to having very different plot settings throughout. 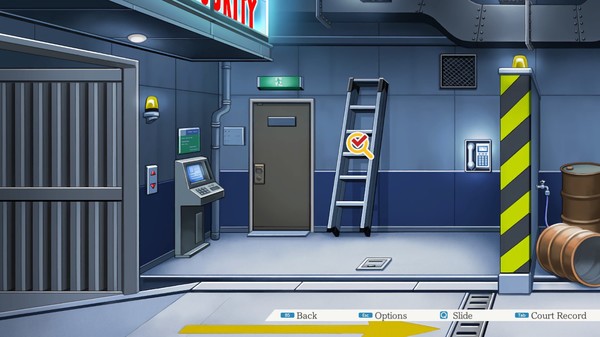 As a visual novel, the detective side was my preferred of the two forms of gameplay since it had less dialogue text to read through. But I’m still unsure about my feelings towards it’s gameplay. It has that point-and-click adventure game feel, but with less character movement. It’s mainly filled with static environments to examine, items to pick up and NPC’s to converse with. But of course this is a crime game, answers weren’t going to just fall into my lap. Some of the puzzle solving was straight forward, but the further I progressed the more I found myself having to really use my brain.

But after the first couple of episodes, being a detective was surprisingly no longer exciting me. It’s understandable since the games originally came out on Game Boy Advance which came with limited hardware capabilities. With that being said, I would have personally loved an update on the detective mechanics. After a while it just became very repetitive. An extra episode made available after the re-release of the first game on Nintendo DS however perked me up. There’s so much more interactivity involved within crime scenes including dusting for fingerprints, finding blood traces and more. I had such high hopes that it would continue on into the next game. But I was left gutted when I found out this wasn’t the case, even though I knew it was only due to Nintendo DS’ updated capabilities. Detective gameplay was slightly updated after the first game. It added to the puzzle solving mechanics but at the end of the day, I was still longing for more interactive elements.

Playing a lawyer though is a different story. Using evidence that you’ve found playing detective, you must do everything in your power as a defence lawyer to prove your clients innocence. And just like detective gameplay, this required a lot of thinking outside the box. To be honest, I winged it with a lot of the harder answers. If you give too many wrong answers though, you instantly lose the case. It’s safe to say those save files really come in handy during tougher times. Proving the other client of being guilty in each episode gave me the same satisfaction as that of winning a boss fight. 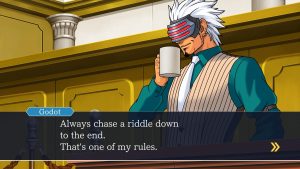 Being a visual novel however meant this came with lots and lots of dialogue text. Without sounding too greedy or trying to take away from what the game’s intended to be, added voice acting would have made this element of the game better. Not only to keep a player like myself more engaged but to keep up with the capabilities of platforms in 2019. Especially since the characters mouths had talking animation.

Visually, Ace Attorney Trilogy has been left the same with the expected remaster polish over. Characters and environments still have a manga-like design, but are a lot smoother and less pixelated. Characters though are still very static with limited animations. It also carries over the same sound FX and music from the original GBA version, just slightly enhanced.

The story is easy to follow with gameplay that can be sometimes fun for 2004 standards however Phoenix Wright: Ace Attorney Trilogy wasn’t about to successfully close the case for me. It’s understandable that it’s a remaster of a visual novel series so it does keep a few extra points for that. But personally I would have liked some updated gameplay elements to keep me fully engaged.

Phoenix Wright: Ace Attorney Trilogy is available now for Xbox One, Nintendo Switch, PS4 and PC and I give it a 7 out of 10.