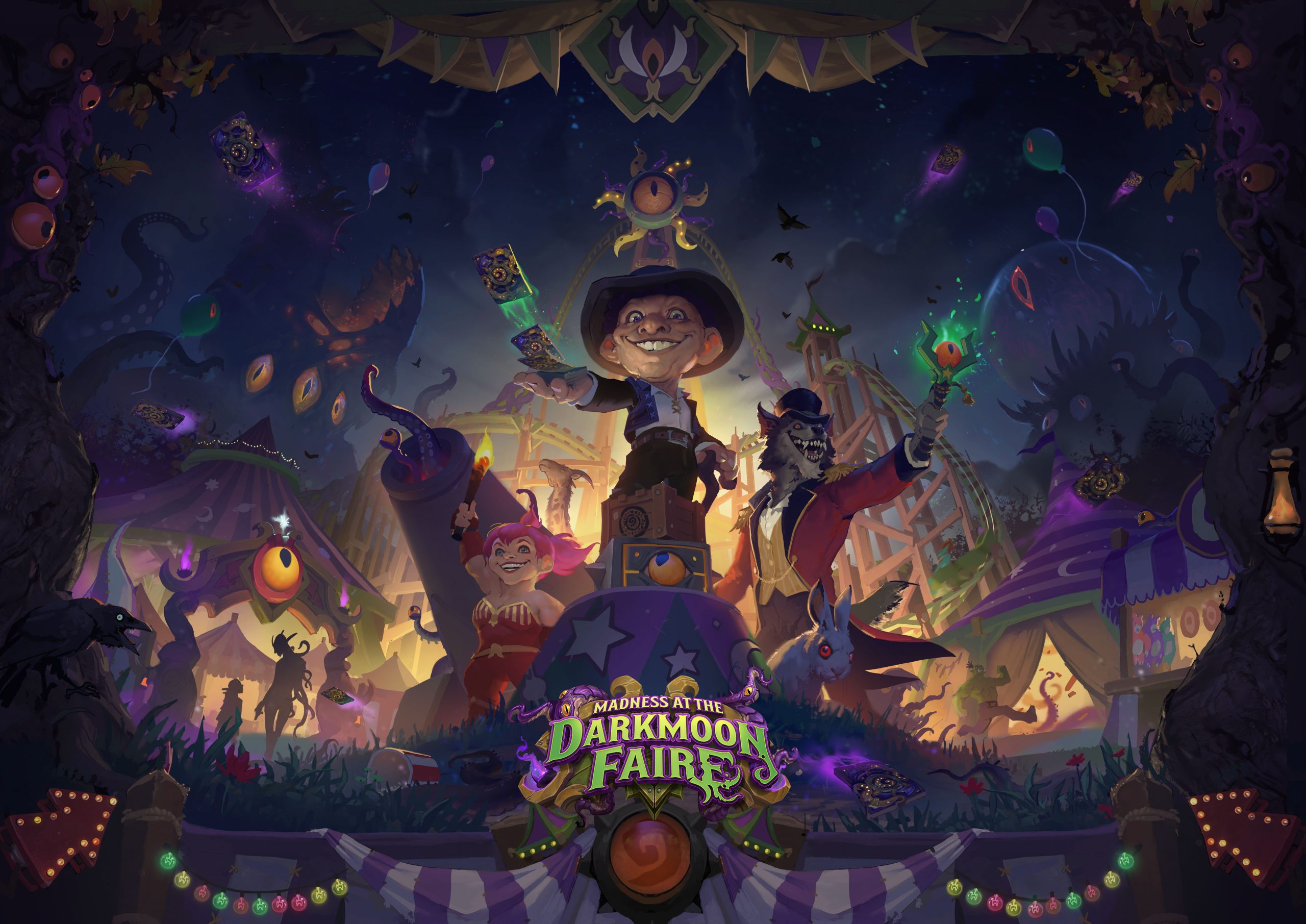 SYDNEY, Australia—23 October, 2020—An otherworldly carnival is coming to Hearthstone on 18 November AEDT/NZDT with Madness at the Darkmoon Faire, the upcoming expansion for Blizzard’s smash-hit free-to-play digital card game, and there’s a whiff of ancient corruption amid the zany wonders and attractions.

The Old Gods—timeless beings of terrifying power that ruled a young Azeroth—have chosen the Darkmoon Faire as the site of their return, and they’ll tempt players with 135 all-new cards that bear the taint of their corruption.

Madness at the Darkmoon Faire hearkens back to the fan-favourite Hearthstone expansion from 2016, Whispers of the Old Gods.

Iconic Legendary minions including C’Thun and Yogg-Saron will make a comeback (in surprising new forms) and allow players to tap into their astonishing match-swinging powers.

If they dare, players can also harness Old Gods Artifacts—powerful spells inspired by the designs of the most dreaded Legendary minions from Whispers of the Old Gods. And to further propagate this foul influence, players can employ cards with the Corrupt keyword, which changes them into substantially more powerful versions after a higher-cost card is played.

“This is a huge moment for Hearthstone, with the Madness at the Darkmoon Faire expansion, as well as an all-new game mode in Duels, and a fundamental overhaul of the game’s progression system,” said J. Allen Brack, president of Blizzard Entertainment.

“As Hearthstone continues to evolve and grow, our focus is squarely on continuing to deliver a uniquely deep and fun game experience, and we think players are going to lose their minds over all of this new content.”

Hearthstone Duels is an all-new completely free game mode that combines the thrill of the player-vs.-player Arena mode with the delightfully unpredictable and over-the-top deckbuilding experience from the game’s most beloved Solo Adventures. Just like in Arena, players will face other human opponents with the goal of reaching 12 wins before accruing 3 losses—but in Duels, they’ll start out with custom-built decks from their own collections, and draft additional cards or game-changing Treasures after each match.

Players will also be able to try their hands at Hearthstone Duels Heroic mode to earn rewards such as in- game gold, cards, card packs, and Arcane Dust. Heroic mode Duels runs can be accessed by paying 150 gold or purchasing a Tavern ticket for $2.75 AUD. The better the player’s record at the end of the run, the greater the rewards.

Hearthstone Duels will evolve with each new season, with the pool of cards refreshed from Hearthstone’s vast card set catalog, and accompanying new Heroes, Hero Powers, and signature Treasures. The theme for the debut season is Wizard Duels, starring a cast of Heroes pulled from the scholars and luminaries of the Scholomance Academy expansion.

Players who prepurchase a Madness at the Darkmoon Faire bundle (see below) will also receive early access to the new Duels play mode from 23 October to 11 November. All Hearthstone players will be able to try out the new game mode beginning 12 November, with the official launch of the Duels Beta and the beginning of Season 1 of Duels currently slated for 17 November.

Hearthstone will undergo its biggest ever systems update on 12 November with its fully overhauled progression system. The new system aims to deliver regular, exciting reward to players, be they initial dabblers, periodic deck-builders, or committed card-slingers.

Here’s a rundown of what’s changing:

• The new Achievements system tracks players’ statistics and in-game accomplishments. New achievements will be added with every expansion, as well as future game modes, and major updates.

• The Reward Track allows players to earn in-game gold, card packs, cosmetics, and more—with bonus rewards for players who purchase a Tavern Pass. Every expansion will introduce a new Reward Track, and players progress through its 50 levels by accumulating experience points from Quests, achievements, and play.

• The revamped Quest system adds robust and rewarding Weekly Quests to the regular rotation of Daily Quests and the special event-driven Legendary Quests that accompany expansions and content updates.

• Players will be able to view their progress through all of these systems via the new profile page, which will track lifetime stats across a player’s account, including ranks, ratings, and wins.

More information on Madness at the Darkmoon Faire, Hearthstone Duels, and the new progression system is available on our official site:

The Madness at the Darkmoon Faire Mega Bundle is available starting today from $109.95 AUD and comes with 85 card packs from the expansion—5 of which are Golden Card Packs (containing all Golden cards)—plus one random Golden Legendary card; the N’Zoth Warlock Hero; the N’Zoth card back; perks for Hearthstone Battlegrounds that last until the next expansion; and early access to the upcoming Hearthstone Duels game mode from (see dates above). Also available is the Madness at the Darkmoon Faire Bundle from $53.95 AUD, which includes 45 packs from the expansion, one random Legendary Card, the N’Zoth card back, and early access to Hearthstone Duels (see dates above).

With more than 100 million players worldwide, Hearthstone is Blizzard Entertainment’s internationally acclaimed, free-to-play digital card game designed for novice and veteran card-slingers alike. Players can choose from 10 powerful hero classes and customise their decks with minions, spells, and weapons based on the unique fantasy of the Warcraft universe. Featuring a variety of game modes ranging from epic head-to-head duels to story-driven Solo Adventures, Hearthstone offers a vibrant and rewarding experience stacked with strategy, personality, and fun.