“Why fix something if it isn’t broken?” This is a common saying about anything that has done a superb job in its original state. In 2012, the Razer BlackShark came onto the market to become one of the top esports headsets, according to multiple reviews. It covered everything competitive gamers needed from high audio quality to comfort. Personally, I wouldn’t go as far as saying it was stylish though. However we now live in a time where gaming peripherals and aesthetics go hand in hand. Eight years on and Razer haven’t fixed the BlackShark per say. Instead they’ve launched two new upgrades while staying true to its roots. The Razer BlackShark V2 and the more affordable Razer BlackShark V2 X still tick the boxes for audio and comfort while also looking stylish and very on brand with their current peripherals. 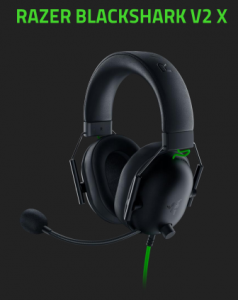 In classic Razer form, the BlackShark V2 and BlackShark V2 X are a higher and lower end product respectively. Both models feature Razer HyperClear Cardioid Mics, advanced passive noise cancellation and cross-platform capability. But to keep one more affordable than the other, some of BlackShark V2’s features had to be downgraded for the V2 X. The breathable flowknit fabric memory foam ear cushions, THX Spatial Audio and Razer TriForce Titanium 50mm Drivers found in the V2 are replaced by regular memory foam ear cushions, 7.1 surround sound and Razer TriForce 50mm Drivers. The Razer SpeedFlex Cable and ability to detach the mic are also missing from the BlackShark V2 X.

While I was excited to test out some of the features only found in the BlackShark V2, we were supplied with the V2 X for review instead. Because of this, there are a couple of reasons why I would have preferred one over the other. However, I still found the V2 X to be a solid headset.

Apart from audio quality, comfort is a huge factor in headset choice. On first wear right up until now, I’m very happy how comfortably they sit. While the memory foam ear cushions may not be covered in breathable flowknit fabric, my ears are surviving the isolation. I tested the BlackShark V2 X over multiple 2-3 hour sessions and didn’t experience any overheating of the ears. Whether or not that’s because it’s been a moderate 16-22 degrees Celsius during winter in Queensland is uncertain. With that said, there were a couple of occasions where I forgot I was even wearing them. Weighing at 240g, they felt just a little heavier than a competitor brand headset I also use regularly. However, the BlackShark V2 X is just 1 gram lighter. The V2 does weigh a bit more though at 262g.

As mentioned on the box, both the BlackShark V2 and V2 X are cross-platform compatible across all consoles, smartphones and of course PC’s. This also gave me the perfect opportunity to squeeze in this tech review whilst juggling all of the other games I was reviewing on console, while also sneaking in some cheeky off-review games. Sound quality across Xbox One, Playstation 4 and Nintendo Switch were good with the headset giving out more volume on Playstation 4 than I’ve experienced with others. But while playing the Switch I noticed a slight crackle roughly every 10 seconds from the right speaker after multiple sessions. This however hasn’t been noticed during any other occasion so this might have just been a game/device specific issue. While it is cross-platform compatible, the BlackShark V2 X wasn’t overly different in regards to quality and awareness that I experience from other headsets.

But obviously as an esports headset, the BlackShark V2 X truly shines though during PC gaming.  However this was when I wish I had the V2 model at my disposal. The BlackShark V2 features THX Spatial Audio along with 18 games with their own custom-tuned audio profiles at launch. These include popular FPS games like Apex Legends, Valorant and Call of Duty: Warzone to name a few. These titles would be perfect for use in THX Competitive Mode. However I was more interested in testing the headset in Final Fantasy XIV Online and it’s own profile since I’ve recently jumped back in. Either way, I still managed to squeeze a few hours in during the review. 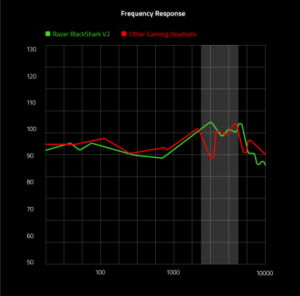 But it wasn’t until I played Overwatch that I noticed the Blackshark V2 X’s true potential. While it doesn’t include THX Spatial Audio, the V2 X still comes with 7.1 Surround Sound. This gave me a whole new audio experience in-game. When my characters talked, it felt like the talking was coming from me. Gun fire was loud, sharp yet clear and I felt more aware of who was coming from which direction. The audio quality made the action feel a lot more immersive and the frequency didn’t do any harm to the quality either. The BlackShark V2 X was able to deliver high levels of audio clearly without distortion while both the PC volume and the headsets own volume control were at 100%. This is thanks to Razer TriForce 50mm Drivers and dedicated tuning ports separating the treble, mid and bass for better clarity.

Most of my time during this review was spent listening as opposed to talking. However I did record and listen back to a couple of voice recordings in comparison to my other gaming headset. The Razer Hyperclear Cardioid Mic in the BlackShark V2 X picked up my voice twice as clear and was louder as well. I wouldn’t regard it as a replacement mic for video recording or streaming though. But when it comes to multiplayer games, it’s capable of doing a high quality job.

My main gripe though was that unlike the BlackShark V2, the V2 X doesn’t have a detachable mic. While the advanced passive noise cancellation would be perfect for travelling in planes, trains and automobiles, the mic is still…there. It’s capable of being pushed to the side when not in use but it’s not the most flexible of microphone arms that I’ve come across. If you’re a frequent traveller like myself, the BlackShark V2 would be a better option to avoid the hassle of a semi-flexible stationary microphone.