In 2017, Razer launched an MMO, MOBA and FPS gaming mouse all rolled into one. The Razer Naga Trinity is the first hybrid gaming mouse in Razer’s long-running Naga line. The main focal point of the Trinity being its three switchable side plates, making it quicker and easier to jump from one game genre to another. That is of course if you remember where you’ve stored them.

The Razer Naga Trinity was also my first MMO mouse which led to a game changing experience. Its 12 button side plate put a stop to the finger gymnastics I once endured while playing games like Final Fantasy XIV Online and World of Warcraft. When I wasn’t playing an MMO, I could easily switch over to the less crowded twin button FPS side plate. Mostly for general use as a lot of my shooters are on console. While the Trinity also offers a MOBA option, I only ever juggled between the MMO and FPS as I’m not a MOBA player. With that said, the Naga Trinity still became a perfect fit for what I needed in a gaming mouse.

But with every mouse that I’ve bought or been given for review, they’ve all shared something in common: wires. I’ll shamelessly say that I game on a laptop meaning I don’t have as many free USB ports as I’d like. And as anyone else with a PC setup would say, the less cord management the better. For the longest time I’ve wanted a mouse that would not only look clean in my setup but also free up a USB port. Though Razer have come through and answered my prayers by bringing out an upgraded wireless version of the Trinity. The Razer Naga Pro looks and feels just like its predecessor but without the restriction of always being plugged in.

At a glance, the Naga Trinity and Naga Pro look same same but different. The same RGB lighting, same ability to quickly change game profiles at the touch of a button and almost the same swappable side plates. Which by the way are the same size as those with the Trinity, meaning I now technically own a spare set. There are only a couple of visible changes with the most obvious being that the Pro is wireless.

The Razer Naga Pro has two wireless connection options: Bluetooth and HyperSpeed Wireless. Since I’ve wanted more free USB ports, I was pretty stoked to have a mouse that could connect via Bluetooth. But while it may be both a USB and power-saving option as opposed to HyperSpeed Wireless, I unfortunately ran into Bluetooth related issues during my review.

After booting up my computer and turning the mouse back on, I experienced some heavy cutouts in the connection. So bad that I had to unpair and then re-pair it with my laptop for it to work as normal. However, I experienced the same issue later on when I left the Naga Pro unattended for a brief moment. Whether it’s because of an issue with my laptop or it was having a fight with my Bluetooth keyboard, the better option was to use HyperSpeed Wireless instead. This also meant taking up a USB port with its discreet dongle.

With that said, I feel that HyperSpeed offers a slightly better experience. While connected to Bluetooth, I felt like my cursor was moving around a little too freely. This also has nothing to do with sensitivity either. Connected to HyperSpeed Wireless however felt a tad more controlled. Being 25% faster than other wireless gaming technology it also shaves off about 33% of the max battery-life per charge. Which out of a possible 150 hours per charge is a large chunk. It may not boast the longest battery life on the market but it will get you through a few days of gaming sessions without worrying about plugging it in.

The Naga Pro also comes with a 6 foot Razer Speedflex cable for you to charge and game with at the same time. It’s also one of the softest and most flexible USB cords I’ve come across. They’ve even designed the end that plugs into the Naga Pro to almost seamlessly align with the surrounding shape of the mouse. It might be a small design feature but I like how much thought was put into designing the Naga Pro to look sleek plugged or unplugged. The Naga Pro is also compatible with the Razer Mouse Dock for quick and easy charging and a cleaner looking setup.

Other visual changes made since the Naga Trinity is the update to the MOBA side plate. Along with their new recommendation for use with both MOBA’s and Battle Royale’s, Razer have completely redesigned the button layout to offer better grip and comfort. What was once a circle of seven buttons with a small amount of grip in the middle is now two horizontal lines of three buttons along the top, allowing for a lot more grip below. After comparing the old with the new, I didn’t find much use for either. But that’s not because I don’t play MOBA’s or rarely play Battle Royale games. I downloaded Fortnite again during my review and still found using the scroll-wheel much easier to select weapons/building parts. However this side plate is perfect for one-handed Diablo. But with the height of the buttons, it’s not exactly a snug fit with my hands, unlike the MMO side plate. At the end of the day, it’s all about personal preference.

The MMO side plate for example. I won’t lie, I felt like I was taking a huge risk when I bought the Naga Trinity. As an MMO mouse virgin, I wasn’t sure if my thumb was going to handle all of that hand eye co-ordination. Luckily, It was the best purchase I made in terms of picking up my game. But I can see some people preferring to hit their abilities the old fashioned way. 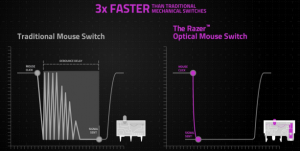 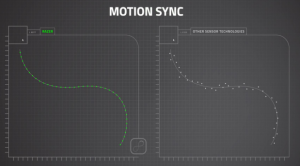 The rest of the Naga Pro’s upgraded features are more technical than visual. While they might look the same, the Pro had an obvious lighter feel to it in weight and movement. Even though it weighs a mere 3 grams less than the Trinity. The secret to the Naga Pro’s almost weightless movement is thanks to its ultra-smooth 100% PTFE mouse feet, reducing mouse drag. In short, it’s Teflon for computer mice and it’s the smoothest I’ve ever gamed in my life.

The Razer Naga Pro features the same Razer Optical Mouse Switches as the Razer Viper, which are three times as fast as mechanical mouse switches and are much more durable. This allows for at least 20 million more clicks than other gaming mice, including the Naga Trinity. Obviously I didn’t test all 70 Million of it possible clicks but the only time my abilities in Final Fantasy XIV Online felt even slightly late were due to lag. The Naga Pro also contains Razers latest Focus+ Optical Sensor which combines Smart Tracking (better calibration), Asymmetric Cut-Off (less cursor drift when mouse meets surface) and Motion Sync (better response between the PC and mouse) for increased precision and accuracy. Personally it’s hard to tell the difference in regards to accuracy and precision since I’m mostly a console FPS player, but I can safely say they were the best games of Fortnite I’ve ever played. However that doesn’t mean I’m returning to the popular Battle Royale.