“Rescue HQ – The Tycoon is a great simulation game that looks simple but quickly turns into a complex resource and emergency management game that is addictive and fun to play.”

Rescue HQ – The Tycoon is a city simulation game developed by Stillalive Studios and published by Aerosoft GMBH. The game released exclusively on Steam on May 28, 2019. It’s a game where you need to run the operations of a Rescue Headquarters that contains up to three emergency departments. You will manage the fire brigade, police and ambulance service so that you can maintain the health and safety of the citizens within your city. It plays similar to Two Point Hospital, only in this game you have the other departments to worry about as well. There are two different game scenarios to play in – Berlin and San Francisco and you have the freedom to design the HQ how you want to best suit your needs at the time.

My first game was in the Berlin tutorial scenario and started with some basic rooms and personnel for a fire department. The mayor of the city gives you instructions and guides you through the first assets that you require. You then must hire, train and manage your personnel, build workshops and utility rooms for training equipment, eating and sleeping facilities and garages. Garages house the various rescue vehicles you’ll need, and once a job is completed, paperwork needs to be completed and filed. To keep up with demand, you need to hire more staff for both the day and night shifts. You must ensure both rosters are sufficient to handle any emergencies that arise in your city 24/7. 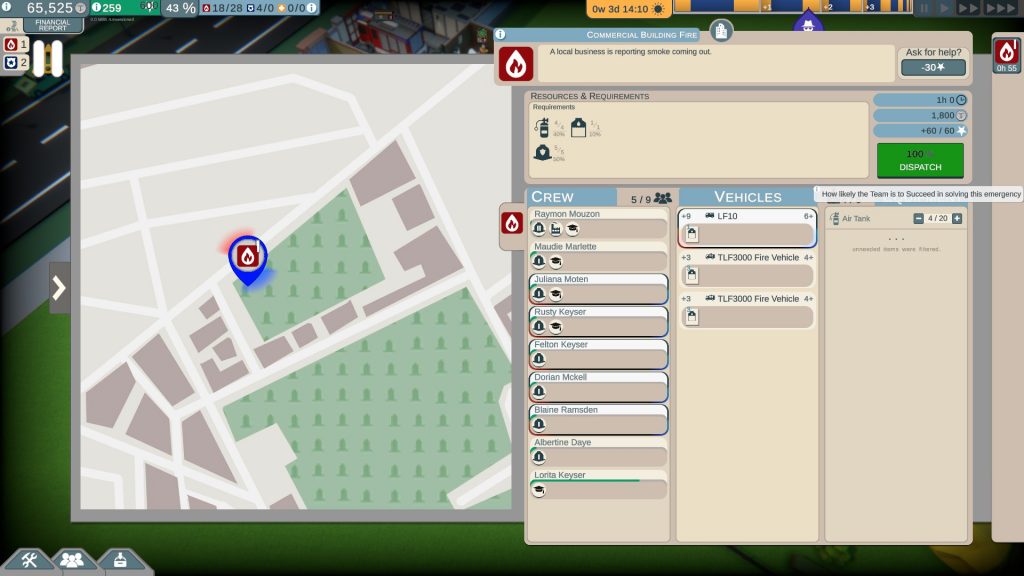 Emergencies can be things like fires, cats caught in trees, robberies, police escorts, arrests, all the way up to terrorist attacks, and occasionally you will have a big event in your city that will likely cause varying types of emergencies. The emergencies user interface lists the requirements for the type of emergency. My first one was a local business reporting smoke coming from their building. The requirements to assist are five firefighters, four air tanks and a water tank. Each fire truck has a water tank, and you start with plenty of firefighters. An issue here is that you have to click all five firefighters, then click a vehicle and then click to add four air tanks. Later on when you’re dealing with grade 2 and 3 emergencies, there’s a hell of a lot of clicking required, all while the game is still progressing in the background. It would be great to have a ‘fill all’ button or something like that, providing you have the resources available.

As you send out your rescue personnel, they will earn experience but also get fatigued. You will balance levelling up your personnel with allowing them to rest, but also getting them training skills and producing resources such as air tanks, medicine, etc. Police and fire vehicles have specific purposes such as patrol cars and SWAT units, fire engines with extendable ladders and bigger water tanks, as well as different types of ambulances. Police personnel can be trained to use sniper rifles, tracker dogs and bomb defusal kits. Your medical staff can be trained to use equipment such as radiology stations, crash carts and 3D printers. You’ll want to be prepared for any situation that might arise. 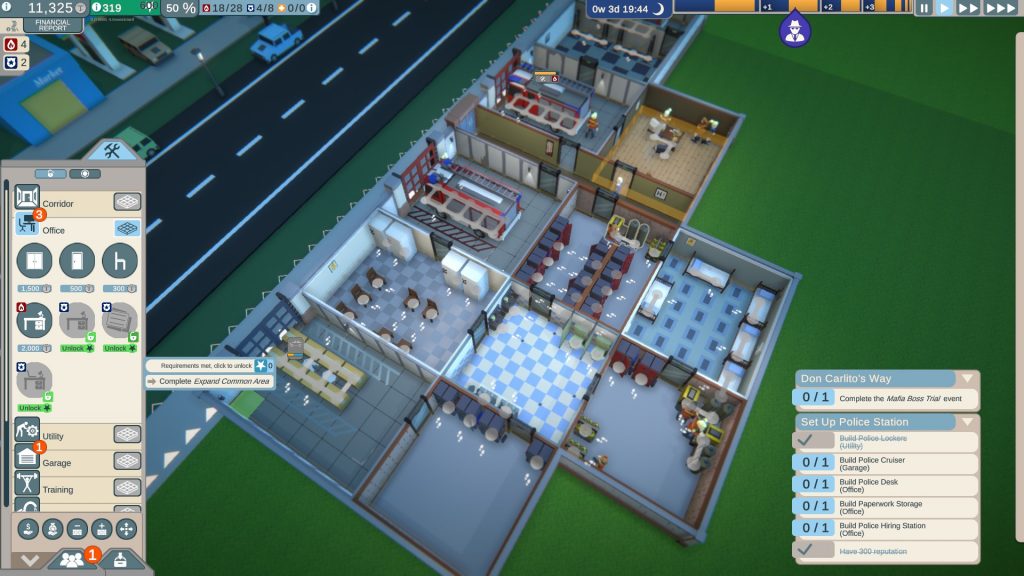 The first major incident i had to prepare for was a mafia boss was facing a trial in a weeks time. I needed to have a police cruiser and access to SWAT gear, as well as enough police officers to handle the task. At the time i had no police department in my rescue HQ. The tutorial was telling me to build police items, but I first had to earn enough reputation completing fire emergencies. This then unlocked the police department and equipment. I hurriedly built enough rooms to house the new police personnel and give them their living quarters and a garage for the first police car. I had just enough personnel and SWAT gear to attempt the task with 86% success rate, however I failed the task. 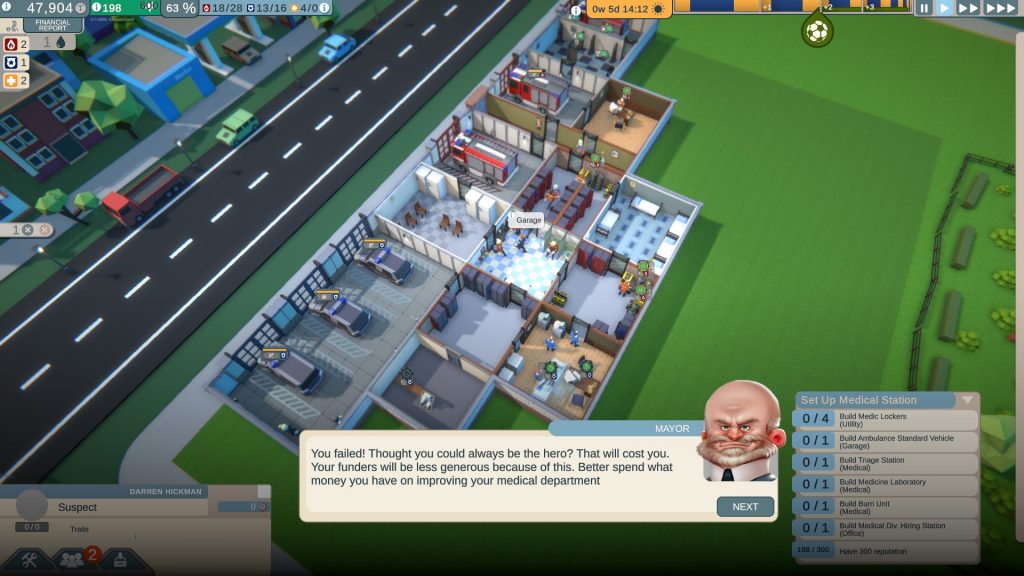 When you fail a job, you don’t gain reputation and you don’t get paid. This will eventually slow down and/or halt your progression and growth. In this case, disasters will come and go, seemingly without recourse however you eventually won’t be able to pay your bills and go into default. Too long in default and you’ll lose the game, having to start a new rescue hq. At the end of each week you are given a finance report. I made a huge loss after my first week and I was given the option to take some grant funds from the city. You can receive up to five grants, but ultimately if you go bankrupt then it’s game over. 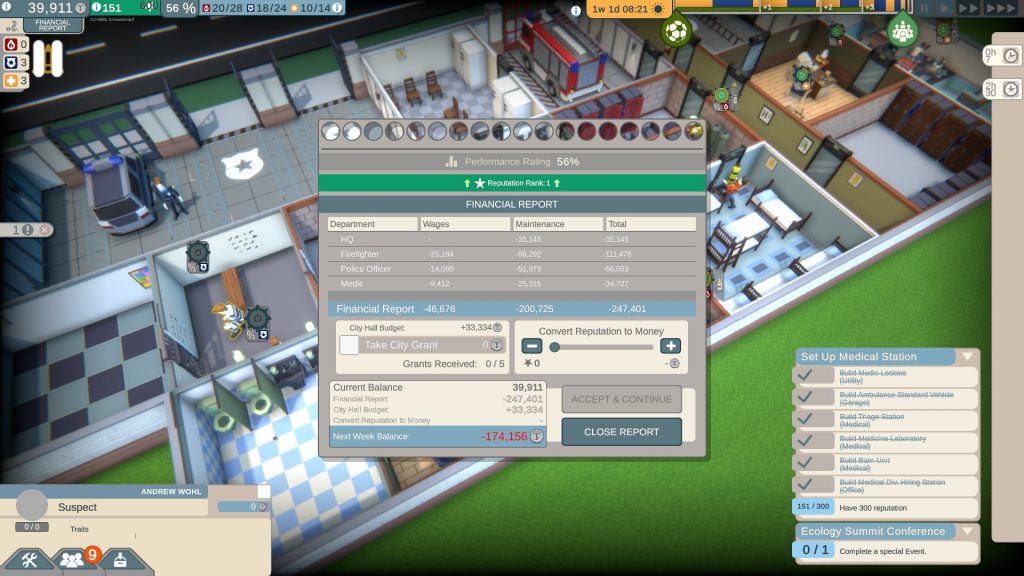 This is a great game that keeps you on your toes and can be stressful at times. I failed a couple of scenarios as I was learning each aspect of the game with emergencies piling up quicker than I could manage. Once you work out the best way to handle common situations for each department, you will be able to build a pretty damn good rescue service and keep that money and reputation rolling in. You can even level up your rookie recruits to veteran status if you’re good enough. I would recommend aiming to build up your reputation first as that will allow you to unlock the resources you will need. Whereas I tried ticking off each tutorial item starting from the top which spends reputation and I was getting frustrated not knowing how to build SWAT items for example. 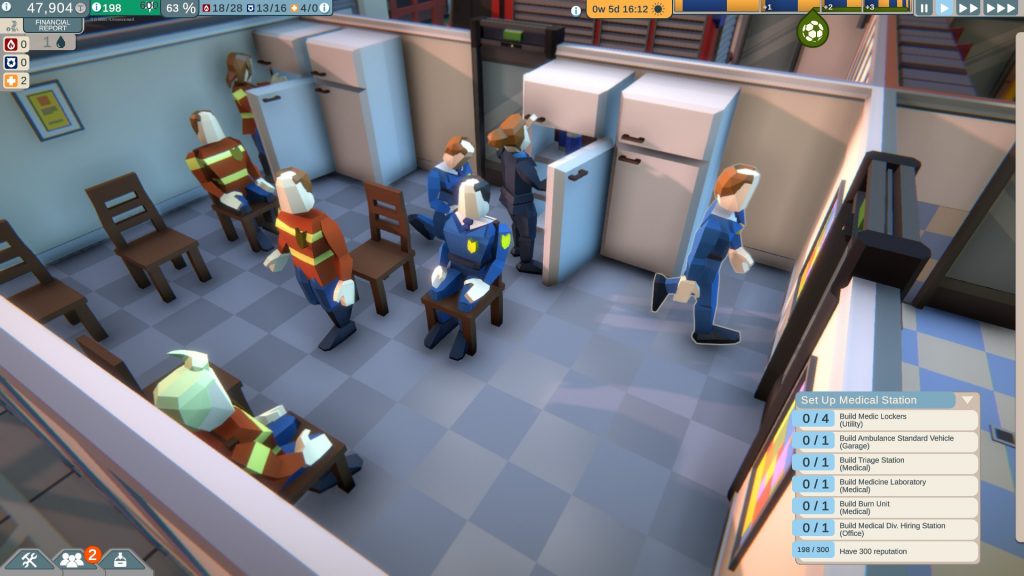 The game runs really smoothly and is only a couple hundred megabytes in size. The low polygon models used in the game help here and they look great, even when zoomed in close, and the music is well suited to this type of management simulator. I often couldn’t unlock many of the items I needed for emergencies as I had spent reputation on things I didn’t need at the time, so it is worth prioritising resources you are commonly asked for before expanding your hq too much. You have the ability to wipe buildings you’ve made and recreate them to be more efficient. There’s also options to purchase more land to expand your rescue hq footprint which you’ll need to do as you grow.

Overall I gave the game a 7.5/10. Rescue HQ – The Tycoon is a great simulation game that looks simple but quickly turns into a complex resource and emergency management game that is addictive and fun to play. There are two scenarios available at release – Berlin and San Francisco, which provides some good variety in both visuals and emergency scenarios and equipment to deal with. Rescue HQ – The Tycoon is available now on Steam for AUD35.64 until June 5, when it goes up to AUD39.60.