This time last year, I wrote an article about MMO’s and their ability to bring people together during lockdown. With little to no physical contact with friends and family last year, many Australians went through tough times mentally. But, thanks to technology, we were still able simulate those same interactions via Zoom, FaceTime, etc. And of course,  gaming.

As per my article, I explained how the social aspects of MMO’s are a great way to keep gamers in touch while also playing together. As well as the mental health benefits from personal experience. This was merely just a suggestion. Whether they’re an MMO or not, video games hold a number of personal benefits. And a recent study from the Interactive Games & Entertainment Association, in conjunction with Bond University, confirms that many Aussie gamers turned to video games last year for these and many other reasons. 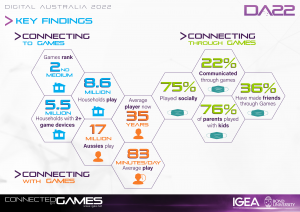 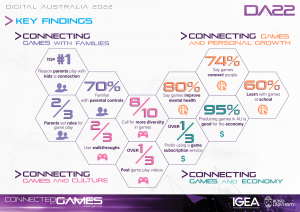 According to IGEA’s Digital Australia 2022 report, 70% of participants lived in a locked down area with 42% requiring to isolate during early 2020. And it’s most likely that the majority of those gamers used video games as a means to connect with others. 75% of gamers played video games with others with 22% of gamers communicating with each other through video games. These numbers are just some of the many to have come out of this study, offering insights to mental health & well-being, educational gaming, gaming in the home and how the pandemic has changed our video game habits.

“Video games were not just a vital source of entertainment during the pandemic, but also a means for connection, communication, and social interaction between friends and family, as well as education and comfort for children,” said Bond University’s Professor Jeffrey Brand, who has run the Digital Australia series of research for 16 years.

Gaming was ranked the 2nd highest entertainment source in the home, losing out to streaming services such as Netflix and Stan but also beating out free-to-air TV. Which is no surprise with the majority of Aussie homes playing video games. And out of the 8.6 million gaming households, 5.5 million of those homes own 2 or more game devices. The average gamer has also grown a year older, from 34 to 35 years old.

It doesn’t matter how old you are to get into gaming, with benefits for young and old. Retirees are even getting in an hour of gaming time per day. Mostly to keep their minds active during the pandemic but also for leisure.

Kids are obviously playing video games as well with 76% of parents also joining in on the fun. And the top reason for playing with their offspring was for family connection, just beating out “my child asked me to” by 1%. While they might look like the cool parents who game, the majority of them were still strict when it came to screen time. Two thirds of parents laid down rules for gaming with the majority mostly making restrictions to how long they were allowed to play with a daily average of 106 minutes.

Kids didn’t stop gaming at home though. Schools have used educational video games for over 20 years and are still using them today. 60% of young gamers have said they’re learning with video games at school.

Participants were also asked about video games used within the school with the majority agreeing that games could help in more ways than just overcoming learning difficulties. 78% say that educational video games could help motivate students and cope with stress. 71% also suggest that could be used as a tool to help students pay attention and focus.

“More Australians are turning to video games for social activities and mental health, changing video games from a hobby into a larger cultural touchstone enabling families and friends to remain connected. Video games inspire creativity. We see people connected to gaming culture whether that be making games themselves, creating mods, watching streamers, or even attending concerts in-game. Australians love and enjoy games on so many levels and we are seeing the local game development industry evolve accordingly,” said IGEA’s CEO Ron Curry.

So what happens now that the majority of Australia edges closer to both state and international borders re-opening? Well, for gamers, it’s business as usual. However we’ve gained a few more members along the way. 36% say they plan to game a lot more now than they did before the pandemic.

It just goes to show that gamers honestly do make the world go around. 2020 was an incredibly tough year for billions around the world, but it was video games that kept the majority of us glued together.