Running away from zombies while juggling what little resources I have at my disposal isn’t my idea of a fun weekend. But my 14 hours spent with the Resident Evil 2 remake are probably my favourite spent in a survival horror game. As a first timer to the 2nd installment but not the series, I had an idea of what to expect from this fresh rehash of an old classic. Through lighting effects, sound and a much more updated graphics standard, Capcom have created a much darker and more eary setting than the original PS1 title from 1998. 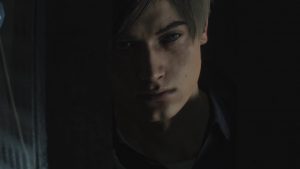 The games linear story isn’t executed in the traditional format. Just like in the original, the same timeline is told in two separate acts each through the eyes of its hero and heroine, Leon S. Kennedy and Claire Redfield. I personally loved this way of story telling since it wasn’t constantly jumping back and forth from one character to another. Giving me a chance to have a better connection to the protagonists and not get disrupted by each others activity.

Starting the first act off with Leon, the rookie cop is led back to his hometown, Racoon City, amid a lot of suspicious radio silence. Leon crosses paths with college student Claire at a gas station as she searches for her missing brother whose also an officer for the Special Tactics and Rescue Service (S.T.A.R.S.). The pair leave for Racoon City together unaware of the citywide zombie infestation due to the T-Virus outbreak from the first game. Becoming separated shortly after their arrival, Leon carries on to investigate what went down at the Racoon Police Department. 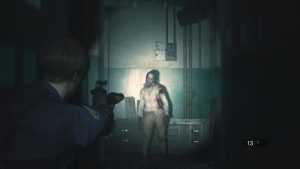 As I explored the dark creepy hallways of the police station, I slowly remembered that this was SURVIVAL horror and wasting bullets on everything that moved wasn’t how I was going to make it out alive. Quickly analyzing the situation and deciding whether I should shoot or run is what kept me on my toes throughout most of my gameplay. The later parts of the act made ammo management a little easier after learning which weapon works best against each creature. Inventory management also had me constantly making cut throat decisions about what to discard when I wasn’t near a trusty Item Box.

A part from being quick on your feet, playing detective is the true key to survival and progress. I would obsessively search every inch of every room for anything that would help me on my adventure. A single piece of paper could hold vital information for a safe or particular puzzle that could lead to obtaining an inventory expansion, weapon upgrade or progressing through blocked off areas. The puzzle solving was my favourite mechanic in the whole game. It became a calming moment of peace away from the dangerously close encounters with enemies. Ranging from easy to sometimes frustrating, nothing could beat the satisfaction of being one step closer to escaping the horrible nightmare you’ve entered. Only to dig deeper into the top secret evil plans that lie within the Umbrella Corporation.

You still bump into Claire during your adventure as Leon, and vice versa, but these interactions are very brief. Without giving too much away there are events in the first act that you’ll later discover are connected to Claire’s story. While Act 1 was slower paced and gave me a chance to become familiar with my surroundings, Act 2 felt a lot more fast paced and dangerous.

As Claire, I felt like I was thrown straight in the deep end. I was almost immediately put in a higher level of danger and had to rely on knowledge I gained of my surroundings in the first act. This time around it felt as if there weren’t as many resources, particularly those of the medical kind. Either that or I was too heavily focused on getting myself out of the death trap I was in to properly look. However, I did notice a couple of the Typewriter save spots that were in Act 1 were no longer available. Act 2 was a somewhat rough and tense 5 hours that felt more like a B side survival mode early on in the act than it did of a separate story telling. 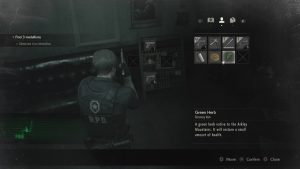 The obvious difference between the remake and the original is not only the incredibly enhanced graphics, but also the change of camera angles. Unlike the Resident Evil 1 remake from 2015, Resident Evil 2’s remake doesn’t keep its original locked on camera angles for each location. Instead it’s replaced by a smoother third-person view that follows you from behind. The door opening loading screen transitions when going from room to room have thankfully become a thing of the past as well. Navigating the menu interface also seemed familiar, not because of the original but it’s very similar to the one used in Resident Evil 7.

But if it’s true nostalgia you’re looking for, the deluxe edition also offers the option to switch between the original and the remakes SFX/music soundtrack. It even includes the bellowing “RESIDENT EVIL TWO” at the title screen. But as much as I love a classic PS1 soundtrack, I felt less tension and fear through the couple of hours I played with the original music than I did with the music of the remake. The music and sounds of the remake knew how to perfectly serve up a whole new level of fear. The music that plays during an extremely tense chase by a Tyrant will forever haunt me.

Capcom have done an impressive job at making Resident Evil 2 look fresh without the usual “copy, paste, polish” remake treatment. For someone who isn’t the biggest fan of survival horror games, I was pleasantly surprised at how much I enjoyed myself despite the high level of stress and jump scares I endured. I even have hope that they give Resident Evil 3 the same remake treatment.