Ever since Capcom released the Resident Evil 2 remake last year, I’ve craved for another experience like it. The back and forth of solving puzzles, collecting items and dodging zombies/Mr. X was both terrifying and surprisingly enjoyable. Being able to do it twice over as different characters was a huge bonus as well. It quickly became a personal Game Of The Year contender early on and the beginning of a love of the survival horror genre. So it’s pretty obvious that the announcement of a Resident Evil 3 remake had me excited. Like RE2, this was going to be my first experience with RE3. But did it live up to the hype and meet the same criteria as it’s successful predecessor? Yes…and no.

The date is September 28, 1998, 24 hours before Leon S. Kennedy starts his job with the Raccoon Police Department and Claire Redfield goes searching for her missing brother. Set right before the events of Resident Evil 2, Resident Evil 3 takes us deeper into Raccoon City. The T-Virus pandemic is causing city wide chaos with many infected Raccoon City residents roaming the streets. Our main protagonist is S.T.A.R.S. officer Jill Valentine, a strong independent bad-ass who has one mission: get the hell out of the city alive. However Jill has no idea what she’s truly in for as it soon becomes one of the toughest nights of her life. 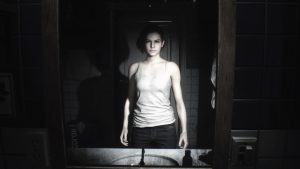 Like Resident Evil 2 we’re not alone in this fight either. Umbrella special ops unit Carlos Oliveira is the secondary character you get to control in the game. As reluctant as Jill wants his help, let alone his Umbrella team mates wanting to assist a S.T.A.R.S. officer, Carlos and co. promise to get Jill out of the city by any means necessary. Unlike RE2 however you don’t get the same dual storytelling experience. There’s no Side A & B, only Carlos filling in when Jill’s unavailable which only happens a couple of times. Don’t get me wrong, Carlos no doubt has a major roll in Jill’s escape and wouldn’t have made it without him. But Jill definitely feels like the star of the show getting more screen time than Carlos.

The zombies aren’t Jill and Carlos’ only problem as there’s an even bigger threat a foot who doesn’t waste time introducing himself. Known only as Nemesis, this deadly killing machine will stalk you out harder than Mr. X in RE2. And he makes Mr X look like childs play as well bringing with them a slew of dangerous attacks at lightning fast speeds. I already knew that this was going to be a slightly different Resident Evil than I was used to. We’ve been thrown into the thick of the chaos and there’s no turning back. 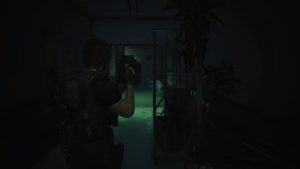 The overall attitude the game presents is clear, “You’ve been in this situation before and you should know what to expect. Here’s your gun, some ammo and some vital info. Now don’t screw it up.” Resident Evil 3 also leans towards action adventure while still containing those survival horror elements. This became pretty apparent early on with the amount of bullets at my disposal. No longer was it a small handful that needed to be rationed to survive the journey. Aside from the threat of Nemesis, this made me more nervous about the road ahead. There’s plenty of chase sequences, waves of zombies and, unfortunately, multiple Nemesis encounters. You can’t shake this guy, he’s like a cockroach who won’t die and will leap over streets to find you. It doesn’t take much to notice the overall energy of the game is bigger than RE2 which played more like a moderately paced detective mission.

But while I didn’t have to stress over bullets for most of the campaign, I still dodged a lot of these zombies as if my gun was empty. Overall combat mechanics received some improvements but also diminished at the same time. Both Jill and Carlos also have their own unique abilities to defend themselves from attacks without the need for bullets. Front runner Jill has probably the most useful ability being able to dodge roll past zombies as well as Nemesis’ quick attacks. While Carlos instead has a counter attack that I simply couldn’t perfect. It feels way too clunky and most of the successful counters were total flukes. What they took away from defending yourself however was shoving a grenade in zombie gobs or shanking them in the neck. What we got instead is bashing a button to try and fend them off. We still get the options to use knives, grenades, etc. but can only be executed as actual weapons and not in a close-quarters defensive way. I honestly put my knife in storage for most of RE3 for this reason. Granted it doesn’t get worn out after a few uses unlike in RE2 so I can see why they took away the option to shank attacking zombies. I still found situations perfectly suited for grenades though but I would have loved to have still been able to feed a zombie a live one instead of bashing the X button. That doesn’t make their half the bodies explode everywhere, does it? 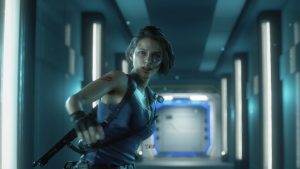 Granted the original Resident Evil 3 didn’t have dual character story runs like Resident Evil 2 either but even so it doesn’t feel like they added much extra to the game. With a finishing time of roughly six and a half hours, that’s if you’re not dying multiple times or getting lost, the Resident Evil 3 Remake meets the same finishing time as the original. Initially I was left disappointed, it’s understandable there’s only so much you can do to add to a story without butchering it. Maybe not according to purist but at the same time it is possible to nail it. The games length is the biggest letdown with RE3. Diehard fans of the original will probably think differently but this is an opinion coming from someone fresh to Resident Evil 3 and likes games that don’t just need one or two casual sessions to finish. Completing RE3 however opens up incentives for playing through the campaign again. Being rewarded for challenges offers items that could even make a hard mode run feel easier. But I don’t usually play through a game again unless there’s a different or secret ending available.

Resident Evil 3 was a pleasant return to Raccoon City, however my visit was definitely too short. It was an action packed ride full of scares but it’s also a ride I’d probably only have one more go on.

Resident Evil 3 is available Playstation 4, Xbox One and Steam April 3rd and I give it 6.5 out of 10.