RETRO gaming remains popular and is now considerably more affordable than it was when all these consoles and games were first released, thanks to a combination of Moore’s Law, inflation, and general technological progress.

As Christmas hurtles towards us, it’s a good time to think about how great gaming was when you were a kid, and maybe even relive some of that Christmas morning magic when you unwrapped a brand new console or sought-after game back in the 80s or 90s.

If you’re looking to give or receive that nostalgia hit this year, there are three iconic retro gaming systems on the market at the moment, all of which have been updated to run on modern TVs via HDMI connections and would make almost any gamer you know very happy indeed:

As someone who had a Mega Drive in the house during his teenage years in the 1990s, I have a real fondness for the console and have been particularly impressed with its latest incarnation as the Sega Mega Drive Mini.

One of the attractions of the unit is that the 42 games included with it include several big names of the era which still hold up well today – notably Road Rash II, Toejam & Earl, Streets of Rage II and Streetfighter II, not to mention the various Sonic The Hedgehog games.

The even better part is it’s a compact unit which runs off a mobile phone charger, and the controllers (you get two) are solid and perfectly capture the feel of the originals.

If you are looking for a nostalgia hit over Christmas – or want to give someone the joyous experience of what gaming was like in the heyday of the mid-late 1990s, you really can’t go past the Sega Mega Drive Mini.

I am reliably informed that the Nintendo Entertainment System – known affectionately as the NES – was also extremely popular in the 1980s, and there is a Mini version available today too, for people who like Mario better than Sonic.

The system comes with 30 games including the first three Super Mario Bros titles, Double Dragon II, Metroid and the original Legend of Zelda. There is only one controller in the box, however.

For Nintendo fans it’s certainly liekly to be a welcome find amongst the wrapping paper on Christmas morning.

If you (or someone for whom you are purchasing a gift) like your PC gaming to be Ye Olde Schoole, then the C64 Mini or The C64 could be just the thing to go under the tree.

The Commodore 64 – AKA the C64 – was one of the first successful home computers, launched in 1982 and still with a dedicated fanbase today despite the systems being discontinued in the 1990s.

There are two version of the 80s classic available at the moment – the half-size C64 Mini, and full-size ‘The C64’.

The full-size The C64 has a full working keyboard and comes with an USB classic joystick updated micro switch classic joystick. It can boot straight into original BASIC (Beginner’s All-purpose Symbolic Instruction Code) mode or or switch to the Games Carousel and play one of the 64 built-in games, including classics like California Games, Impossible Mission and Boulder Dash, with new additions like Attack of the Mutant Camels, Hover Bovver, Iridis Alpha, Gridrunner, and the text adventure Planet of Death.

The C64 allows for game/programme loading and saving via USB stick, and advanced users can even programme in C64 or VIC 20 BASIC languages if you really want to go for the complete 1980s computing experience.

The C64 Mini is a half-size affair that does not have a working keyboard (and only has two USB ports), but is otherwise more or less the same thing as its full-size sibling – albeit smaller, without some of the games (notably Attack of the Mutant Camels, Hover Bovver, Iridis Alpha, Gridrunner, and Planet of Death) and $50 cheaper.

Personally I’d suggest the full-size The C64 version would be the more versatile option, especially for anyone wanting to programme, but if you or someone you’re buying presents for has a mini retro console collection going, the C64 Mini might appeal there too. 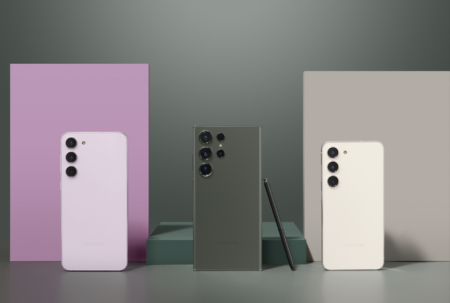 [This press release has been provided by Samsung PR and is presented by the GOA team for your information] SYDNEY,…