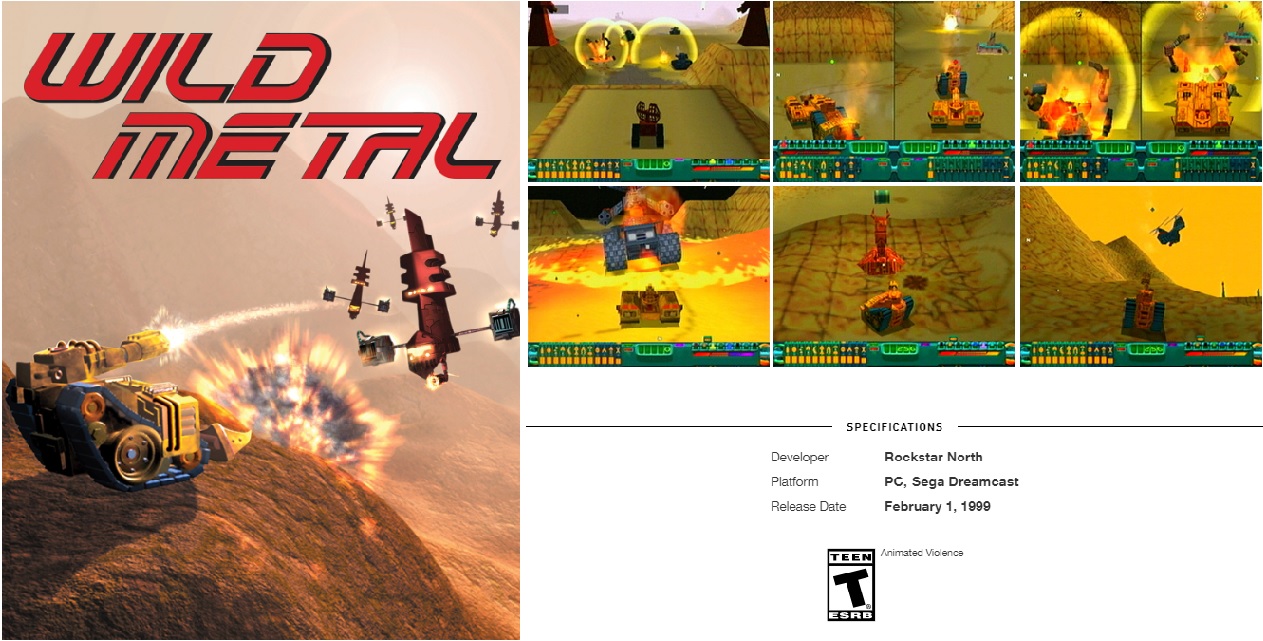 Have you ever had a game that you played and instantly fell in love with, only to not be able to find it any-bloody-where?! This was the case for my mate Gruntels and I back in 1999, with a little old game called Wild Metal Country.

In the late 90’s Gruntels would often come around, or I’d go to his house and we’d have a play of some DOS games for nostalgia. Games like Legend of Kyrandia 3, Quest for Glory 4, Micro Machines, Slix ‘n’ Slide, Stunts, to name a few. Sometimes we’d load up a new demo disc we got from the latest PC Powerplay or PC Gamer magazine to see what was up and coming. Well this one time we came across a demo for Wild Metal Country, developed by DMA Design and published by Gremlin Interactive in 1999.

The premise is simple. You’re a tank, and your co-op buddy is a tank. You drive around and shoot at other tanks, or each other, whilst trying to collect all of the coloured containers. That’s pretty much it and we bloody loved it! The keyboard controls were pretty mental to get your head around.

In the demo we could only go the Rhino tank, pictured above. Being a tank, you have two tracks on either side of the tank. You need to accelerate both tracks at the same time to go forward. To turn right you need to keep the left track moving forward and the right track moving backward, and vice versa. The turret is independent of the tracks/body, so that needs to be moved separately too. Sound a little complicated? Well get this. The default movement controls are:

And that’s just to move! Then you have spacebar to shoot missiles and left-ctrl to plant a mine. Now those are the single player controls. We played local multiplayer, so we had to share the keyboard controls. One of us used the left side of the keyboard, the other the right. I can’t even remember the combinations, but it was bloody funny just watching us on split screen trying to figure out how to move and shoot the bloody things! We used to mash our controls trying to shoot the other tanks, or each other, and mash so hard that we’d get the old ‘keyboard input errors’ which would lock both our controls out for a bit. Hilarious!

The enemy tanks would be shooting at you and protecting the coloured containers were turrets that would lob exploding drums at you. When you get hit, your tank is thrown into the air and bounces around like a ball in low gravity. Sometimes you’d get blown around and then land upside down or on your tank’s nose, so you’d have to shoot the ground to bounce you back up. Just as you’d land upright, someone would shoot you or lobbed a mine next to you, bouncing you around again. There was much hilarity had when we fired this game up, and it’d be the first game we’d play whenever we got together.

We played the sh*t out of the demo as it was tonnes of fun, however we wondered what the full version of the game would be like. Back then we were all about free games, so we searched a lot of warez and abandonwarez sites for this game, as that’s what you did back then. However, we couldn’t find any download links anywhere – not a single one! Even good old Limewire was coming up with nothing! We searched for more than a year for this bloody game and in the end, we gave up.

That was until one day in 2002 when completely out of the blue, I got a message from Gruntels saying, “I’ve bloody found WMC?!?!?!?” I called bullsh*t, because this game was a bloody enigma! But no, he actually did find a download for it and it was the full game! Best of all, it was free! He can’t remember where the hell he found it, but he had the install file burnt to a CD for me. We made backup copies of that CD so that we never lost it again and saved multiple copies on our hard drives. This was like the holy grail! Even better still, the full game had an actual campaign of missions and allowed us to use six different types of tanks! SIX!! None were as good as our favourite Rhino though.

Rockstar Games created a Dreamcast port of the game in 2000, and then in January 2004 the game was enhanced with compatibility for modern hardware and re-released as part of Rockstar Games’ “Rockstar Classics” series of freeware games. This package also included 1997’s Grand Theft Auto and was available on their website. Then in January 2008, Wild Metal Country was added to Steam, however I can’t see it there now. They have a basic info page here but can’t see a download link, bugger. Here’s gameplay of the first single player mission.

Did anyone else play this back in the day? Or are Gruntels and I just crazy and have a weird fetish for this game? Let us know on the Game on AUS God Mode FB group. Game on!