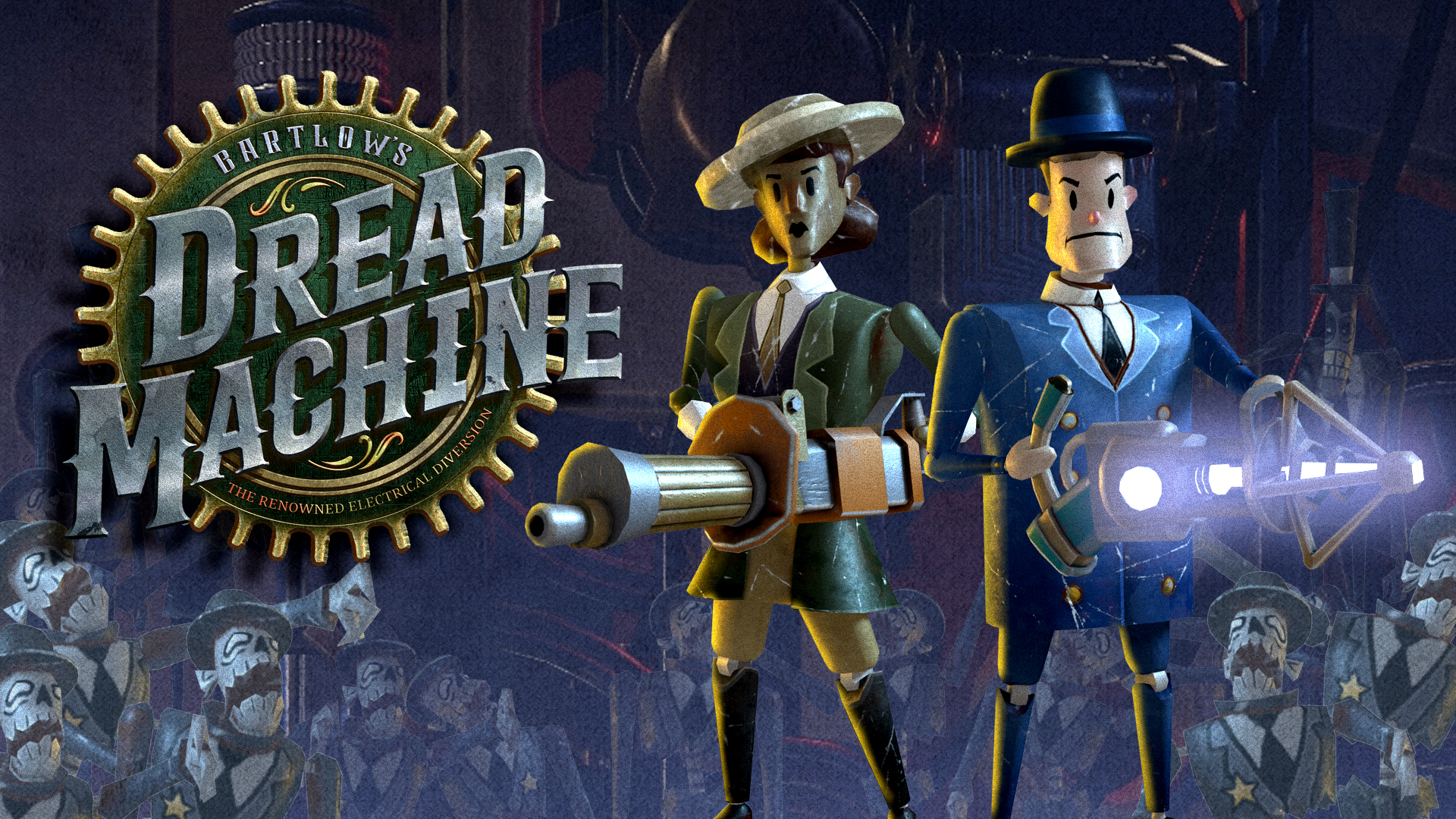 What do you get when you combine an Edwardian-era coin-operated mechanical amusement aesthetic with modern video games?

The delightfully fun (mostly) Bartlow’s Dread Machine is the answer.

Developed by Beep Games and Tribetoy and published for PC, Bartlow’s Dread Machine has a great framing device in that it’s purportedly taking place in the titular machine – a pioneering 1900s “electronic diversion” which has subsequently been lost to the mists of time in slightly mysterious circumstances before being recreated by the (video) game’s developers.

The plot is straight out of a Jacopo Della Quercia novel – the year is 1906 and Anarcho-Satanists have kidnapped US president Teddy Roosevelt, and it is up to you as a Secret Service agent to save him.

Your journey will take you from New York to the Wild West to San Francisco to the Pacific Oceans and the jungles of Panama, and beyond.

Broadly speaking, the game is a co-op twin-stick shooter and is perfectly playable with either a controller or a mouse and keyboard; you can choose from a range of characters (male and female) with a host of different weapons ranging from repeating rifles and pistols to portable Gatling Guns to a lightning cannon and a radium ray.

They will find themselves facing the dark Anarcho-Satanist forces, including zombies, ghouls, jack-in-the-boxes and even prawns with explosives strapped to their backs.

The mechanical amusement element of the game has been beautifully and vividly recreated – it really does feel like the sort of thing one might find in a seaside pier arcade around 1910. You can see the mechanical rigging working on the characters and backdrops, and the characters and enemies are visibly made of tin, with holes and sparks appearing at they take damage.

One of the innovations I really liked was the idea the characters are all on tracks, visible on the screen (and keeping with the ‘1900s arcade game’ framing device). It also presents some interesting tactical choices, as you may be limited in the directions you can move to fight enemies in a given situation. It all works really well and very naturally

The soundtrack is excellent too – a perfect companion to the action on screen, and during the confrontation sequences it switches to a spot-on silent movie piano accompaniment, really adding to the framing device that you’re playing some old-timey arcade game from an era of straw boater hats and handlebar moustaches.

I absolutely loved everything about the game right up until the solo mode boss battle in the Panama Canal Zone setting, when the difficultly spiked ridiculously and I found myself seeing the “Defeat” screen over and over and over, like a mechanical monkey with a miniature cymbal.

Your currency continues to accumulate across attempts (meaning you can essentially grind levels for more cash to buy better gear) but even when coming back with armoured trousers and a lighting gun and playing on Very Easy mode, I was still getting stomped on no matter what I did in the final battle.

I cannot overstate just how suddenly this battle brought my enjoyment of the game to a screeching halt. Up until that point, the game had been a delightful throwback to 1900s amusements and a good twin-stick shooter in its own right, but following countless attempts to get past the battle – including replaying the entire game on a lower difficulty level as a different character with a more powerful weapon – I found myself wanting to unplug Bartlow’s Dread Machine and walk away.

This is a shame because the rest of the game is so incredibly well done, and serves as an example of how poor difficulty balancing or level design can undo so much hard work.

I’m hoping the developers fix the problem – I know I’m not the only one who has experienced it – but as I’m reviewing the game I played and not the game as it might exist once it gets some updates etc, it’s an issue I can’t ignore since it so fundamentally impacted my ability ability to enjoy and experience the game.

As much as I loved the setting and the aesthetic and the gameplay, I can’t encourage people to get the game until the boss battle is rebalanced – or if you do decide to put some coin into Bartlow’s Dread Machine, know that you’re going to run into that obstacle.

Otherwise, Bartlow’s Dread Machine is only about eight hours long – which is a good length; it keeps things moving at a good pace – and (final boss battle aside) is a quirky, fun and entertaining vintage-inspired twin stick shooter with a neat aesthetic and soundtrack too.