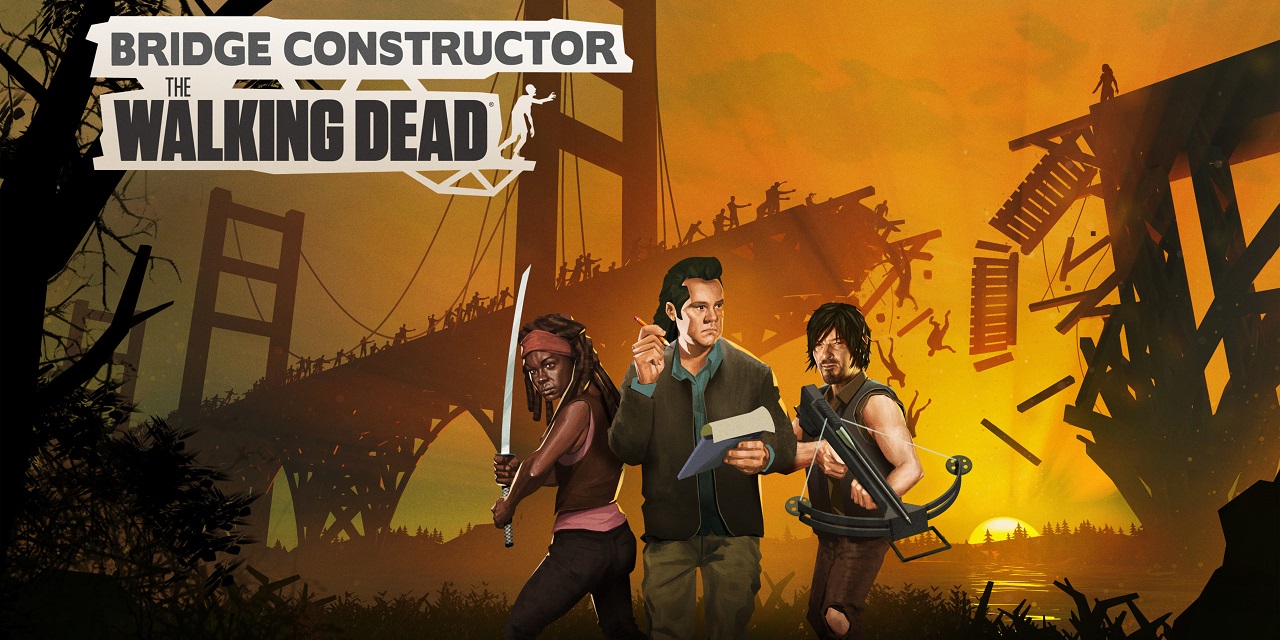 Whilst I had fun for a little while in the base game and the Portal variant, I lost interest after a short time. However I love AMC’s The Walking Dead TV series so already I was invested in checking this game out, and even better that I got to play this on the Xbox Series X. The core gameplay experience of constructing bridges, ramps and structures is there, so veterans of the series will feel at home. Now the environment is post apocalyptic and reflects bleak landscapes and dilapidated abandoned buildings. There’s also the added threat of walkers, or rather, the opportunity to set lethal traps to obliterate said walkers with hilarious ragdoll physics. The game’s menu music is very similar to that of the TV show intro, and once in-game the music is eerie but almost soothing at the same time, helping you to focus your mind on solving the puzzles. The game is overall light on story but there’s enough to keep you invested in helping the characters survive and continue over the 5 chapters, each with 8 missions.

You start by constructing simple bridges with wood, then later you can use wire cables and steel girders. You click and drag to create lengths that need to be joined together to create the foundation of the bridge. There are grid lines in the designated build areas which are helpful to make adjustments to angles and lengths as you plan the structure. Using principles of physics, you can construct either substructures below the foundation or superstructures above it, or a mix of both. Triangles and other geometric shapes are your friend! This ensures the integrity and weight rating of the bridge is sufficient to support the weight of a person first, and later to support the weight of different shapes and sizes of vehicles crossing the bridges. Let’s not forget the weight of hordes of walkers chasing you, giving me flashbacks of Season 9 Episode 5 of The Walking Dead.

Bridge Constructor: The Walking Dead utilises coloured items and anchor points to give you initial hints and solution options. When constructing a bridge, you build off a yellow anchor point. Connections between pieces of wood/steel are purple. As you connect wood/wires and steel together and then do a test run, if you haven’t anchored the structure correctly, gravity will immediately cause sections to drop and pull down the rest with it. Some sections of wire or wood will flash red and possibly break away. Other times some sections may glow red but still hold the structure in place. This indicates a weak point so a vehicle or heavy object may cause that section to collapse. There are also other objects that will glow blue, such as barrels or containers, indicating these objects can be moved.

We get to meet some familiar characters from The Walking Dead TV series starting with Eugene, with his dialogue manuerisms reflected excellently in the game. Later we come across Daryl and then Michonne. Each of these characters has an ability to use to distract or take down the walkers. Eugene can throw a noisy bunny to distract the walkers, while Daryl can shoot crossbow bolts and Michonne can throw grenades. Walkers can be killed if Daryl or Michonne are in melee distance of them, but only if they are running into them from behind. If front on, they’ll get attacked and killed, so positional tactics are required in those levels. There are also some iconic vehicles from the TV series that you need to safely get from one side to the other, each with different weight ratings that you need to consider.

You have unlimited resources to be able to complete each level, however you will get a bonus completion star if you can complete the level using the recommended amount of materials. This is where my brain was really tested in trying to construct the bare minimum to keep materials under this figure. Of course, there are walkers to kill too. Early on you can see the walkers gathered underneath a container which is suspended from the roof. Using the active character, you flick a switch which releases the container and crushes the walkers. Other levels have you creating a bridge for the survivor to cross, whilst toppling a container from a high ledge. You need to carefully add weight and work out timing to topple the container so that it doesn’t crush the survivor and still take out all the walkers.

Later there’s a level where walkers are trapped in a space between a dumpster and a neon sign. The sign has a fixture point on it, as does the bin. Connecting a cable between the two does nothing initially until you distract the walkers to move to the left which causes them to push the dumpster, pulling the sign crashing down on top of them (though frustratingly one walker always survived this, no matter how I tried to topple the sign). There are some clever and oh-so-satisfying zombie crunching levels, and some cool levels where you have a vehicle and a winebago that need to jump a gap. This one took me ages to work out with some hilarious fails, but eventually conquered it.

There were some levels that I spent close to an hour figuring out, testing lots of different combinations of structures and components. I even had to google bridge construction images to get some ideas and inspiration as I wanted to avoid just watching a walkthrough on YouTube. You can test your construction endlessly just by simply resetting the survivor’s or vehicles paths. Other times I had to stop playing and have a break, returning later and then working it out. It can be frustrating in later levels, but very satisfying once you finally work out the solution. Even better is when you can use just enough resources to get the shiny bonus star.

Overall, Bridge Constructor: The Walking Dead is an awesome addition to the Bridge Constructor series given the added feeling of survival in The Walking Dead universe. There’s a lot of variety in each level given the objectives are not just about rescuing the survivors, but also taking out the walkers in hilarious ways. The levels are easy to hop-in and hop-out and even better with quick resume on Xbox Series X.