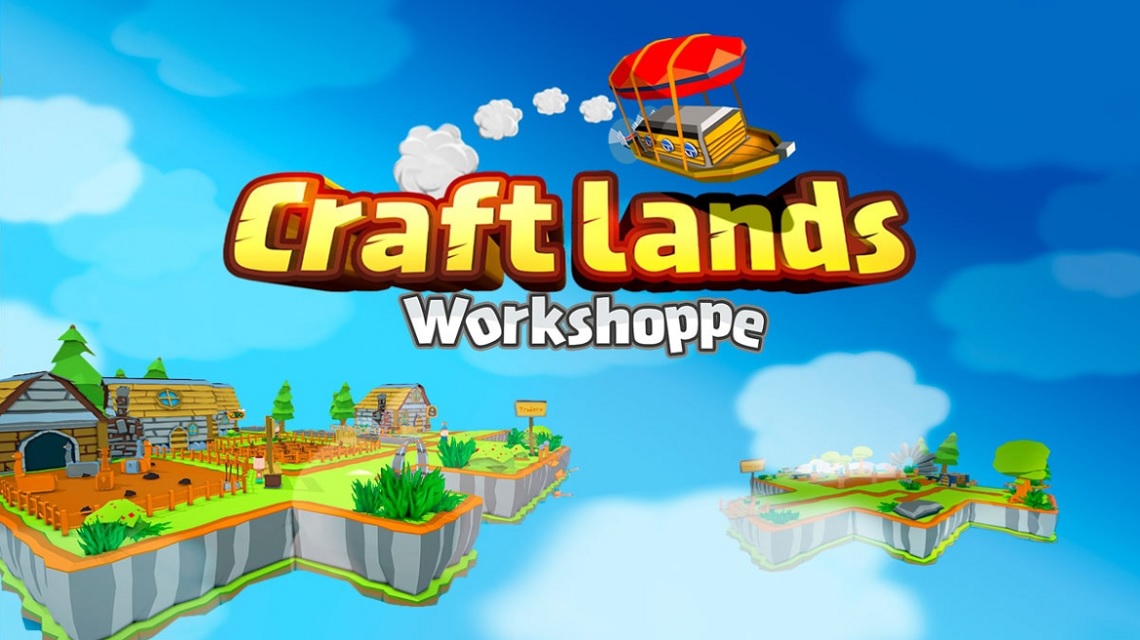 Craftlands Workshoppe is a self-described funny indie capitalist RPG trading adventure game by developer Arvydas Žemaitis and published by Excalibur Games. The game released in Early Access on October 14, 2020 and is the latest iteration of the Shoppe Keep universe. If you’ve played Shoppe Keep 1 and 2, you will be familiar with the game’s premise. Essentially establish a shop to sell your wares, ensure it’s kept clean and tidy and that you keep the people happy, and continue to build a thriving shopfront for all to marvel!

It sounds simple, and it does look that way with its art style. However, it is quite a complex game once you get started. The esteemed bearded character Allcraft has disappeared through a portal. He had mastered all of the trades and discovered the magic of the portal. His shop has been left unattended, oh, and he forgot to pay his taxes, or to clean it before he vanished. Rude! He has left the shop for you, his apprentice, though the town hall has taken all of Allcraft’s permits! You head to the town hall and are given a permit to trade, and must select one of three crafts to specialise in initially from Alchemy, Cooking or Blacksmithing. I’ve always loved Blacksmithing so that what I chose.

There are about four different movement control types in the game and it took a while until I settled on my preferred. Heading back to my shop, I had to do some cleaning up of the shopfront to make it presentable. You learn how to mine iron, and thankfully it’s not as complex as having to refine the ore into ingots, you just get the ingots in your pack. A nearby smithing shop, affectionally called “He who smelt it”, teaches you basic blueprints for a cost and also sells items that can enhance your characters movement, smithing speed and other attributes.

The start of Craftlands Workshoppe is slow going. You can only carry 25 items at a time initially and to make iron swords you need iron ingots and the blueprints for each sword. Blueprints are for a single item, as opposed to permanently learning the recipe upon use. Back at your shop, once you have loaded the recipe into the anvil, you can then do the smithing mini-game of hitting the hammer in the green spot 4 times to craft each sword. Once you have enough in stock, you’re ready to open your shop.

Visitors come to this island in the sky every morning at 8am. Crafting, running around, gathering ore and all other activities use energy. You have a limited energy pool and must sleep to regenerate it, so it’s a balancing act in gathering resources, running off to buy blueprints, crafting the items, and so on. The limited pack space meant lots of running to and fro. Thankfully, shopkeepers have a delivery option so you can purchase items and have them delivered. Once I had 20 swords crafted and put them up for sale in the shop sales interface, I slept until 7am to recharge, waited until 8am and opened my shop for business.

Customers will enter the shop and most of the time they will only want to buy the things you have put up for sale in the shop sales interface. Starting off, I only listed the iron swords, however sometimes customers asked for nails, a helmet or cutlery. I hadn’t learned those blueprints, so I just dismissed those customers. Keeping your customers happy is the aim of the game, so dismissing the odd customer or closing early won’t affect your reputation too much, but if you can’t keep up supply of the things you said you would sell, then that’s poor management, of course.

It was a slow and laborious balance in Craftlands Workshoppe of earning enough money to buy more blueprints and mine more iron, to then sell them for a profit and be able to afford upgrades. After a short while there’s a bang coming from your basement. Allcraft left in such a hurry that he hammered the basement door shut and didn’t bother to tell his workers he was leaving. The workers demand to be released so they can keep working for you, however you need to buy a permit to unlock the door. At 28 silver, I couldn’t afford it straight away. I then had to balance buying items that improved my crafting effectiveness, with spending money on getting a backpack to hold more items which means I can craft more and therefore sell more, to make more profit.

Once you get up and running though, the profits start rolling in but supply and demand also increases, so the intensity keeps ramping up just as you get used to the next tier of management. You can lose hours in this game, as you could with Shoppe Keep 1 and 2. These are the types of games I like to play in between other games or if I only have a short window to play that night. These games are fun, test your mental capacity and are challenging in their own right. Being early access, things will likely change and be improved, and according to the game’s Steam page, early access should last around 6 months.

Craftlands Workshoppe is definitely a game to check out if you like simulation and management games. This has some good puns and light-hearted humour to keep you in high spirits despite the sometimes frantic nature of running your shop. The more of the island you explore, the more options open up for you and the more you can delve into the mystery of the overarching story. I’m looking forward to putting more time into this game and learning the other crafts.

This review utilised a game key provided by the publisher. Craftlands Workshoppe is available now in early access on Steam.