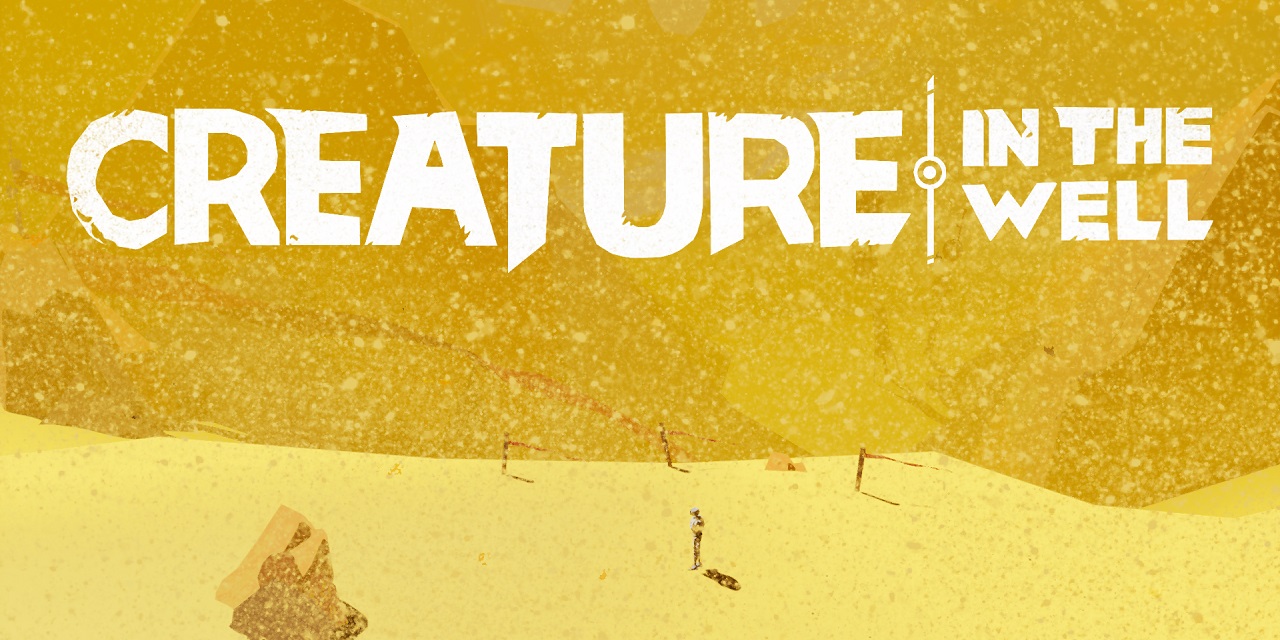 Creature in the Well Review

Creature in the Well’s pinball-style gameplay gelled so well with the dungeon crawling nature of the game, and this was supported with a good balance of story to keep you pushing forward.

Creature in the Well is an isometric pinball-inspired dungeon crawler developed and published by Flight School Studio. It released on Steam, Xbox One and Nintendo Switch on September 6, 2019 and I came across this game while browsing through the Xbox Game Pass catalogue. A deadly sandstorm is threatening the city of Mirage. As the last remaining BOT-C unit, you must venture deep into the cavernous depths of a desert mountain to restore power to an ancient facility, haunted by a desperate Creature.

As a BOT-C unit, you start in the middle of the desert with wind and sand blowing. Your only guidance to move forward is a piece of pipe sticking out of the sand. Picking up the pipe, you realise you can swing this as a weapon. Looking ahead you see the edges of tall sand dunes which funnel you on a linear path, and you see posts sticking out of the sand. Following these posts leads you up a sandy mountain to a cave entrance. With the sand blowing across the screen cutting down your vision, I was initially put off by the art style. However, once I stepped into the cave and saw the hand-drawn art of the platforms, bridges and obstacles, I was hooked.

Once inside, you hear what sounds like a mechanical groan and then see a large skeletal hand reaching up. Two eyes flicker open and the monster speaks, “Oh? A lone engineer returns to the machine in my mountain after all this time.” The beast asks, “where were you when the rest of your kin were trying to save this town? If you are here to finish what you started, you should turn back. I will be watching.” You’re able to run along a metallic bridge to a door that automatically opens.

In the next room, you see a floating white orb and are prompted to use ‘Y’ to strike the orb. You swing your pipe and hit the orb, ricocheting off the barrier in front of you. As the orb hits the barrier, a white energy bar starts to fill and you gain power points. Ahead of you is a door which requires 200 power to open but you don’t have enough power. You run along the hallway to another room with more energy barriers. There are multiple energy orbs available to hit. With multiple orbs now ricocheting off the barriers, your power units are climbing and soon all the barriers are dropped. Playing Creature in the Well really does feel like you’re playing pinball inside a grander adventure game.

I had enough power now to open the door and came across a sword that prompted me to hold ‘X’ to charge, then press ‘Y’ to strike. I aimed at the larger barrier which filled with energy and dropped straight away. This then caused a circular piece to raise which drew all the remaining energy orbs to it. The orbs were spun around this circular object with increasing speed, all the while building up masses of power. I needed 5000 power to open the next door and this room alone had given me that. You’ll find that most rooms will provide you with enough power to progress further, however you are never short of power because you can go back and repeat rooms if you wish. I’ve never played a game like Creature in the Well before and it was very intriguing. The music also adds an inquisitive atmosphere to the game.

As you progress through this first cave area, the rooms get more complex and the puzzles get more challenging as they throw newer game mechanics at you. Sometimes you’ll have items that glow red and when a ball strikes these, they will send a flaming ball back at you. This is where you learn how to dash by pressing ‘A’. If you do not deflect this red orb, you will be hit lose some health. Other barriers will light up a segment of the ground in orange and if you do not move, it will blast you for bigger damage. Eventually you’ll drop down a shaft into a cavernous room with a large platform which leads to a huge round door. There are smaller platforms branching off this, as well as some inactive switches. Running back along the platform, you meet Roger T. Frog, a talking cleaner frog who is surprised to see you, a BOT-C engineer he thought were long gone. No one has been able to open the large sealed door but he says, “You’re an engineer, you’ll figure it out!”

Across from Roger is a pool of white substance. Running into this replenishes BOT-C’s health. If BOT-C loses all its health, which happened a lot as I progressed through the dungeon levels, the monster’s big skeletal hand picks you up and drops you back outside the mountain. You pick yourself up and must run back into the mountain to complete that dungeon, albeit with 1 health point. After replenishing your health in the white pool, you can run back through rooms you’ve already completed and quickly catch up to your progress. You can also do those rooms again to collect more power but it’s optional. Healing pools are spread throughout each of the 8 dungeon levels which did come in handy.

I liked the fact that the rooms don’t reset so that you can quickly run back to where you were. This was particularly useful for when I died in a boss fight at the end of each dungeon level. These boss fights also got increasingly more intense and took me several goes each time as it threw new mechanics at me. The skeletal monster also shoots slow-moving projections at you which you need to deal with, in addition to the rest of the puzzle. After numerous deaths, it always felt good to finally defeat them and reactivate part of the ancient machine and reading the lore behind that particular part of the machine and that section of the mountain.

Throughout the 8 themed dungeon levels in Creature in the Well, you will come across secret passages that will reward you with different cosmetic capes, weapons and upgrade cores that BOT-C can use. You can tell where some of these secret passages are by looking at the electrical conduits on the floor. Ordinarily the conduits just connect between the obstacles, but occasionally you will see one snake off to one of the walls. I found this usually meant a secret passageway, providing you had the patience to overcome the puzzles.

Often you had to power up one object which would spawn additional objects, each with a countdown timer. You had to be accurate to hit and power them in time. Towards the later levels, they got too frustrating for me to complete, but if you have patience, you’ll work out the best method to beat the puzzle. If you do prevail, you’ll be rewarded with new weapons such as a baseball bat and a pan that reminded me of panning people to death in PUBG. Some of these weapons are gimmicky, but that suits the pinball-style of gameplay. You can also find core upgrades which can be used to upgrade BOT-C’s power when taken back to a large crocodile name Danielle, Mirage’s blacksmith. The upgrades were very useful and I often had to swap my weapons based on the difficulty of the boss fights.

This game surprised me in a great way. Creature in the Well’s pinball-style gameplay gelled so well with the dungeon crawling nature of the game, and this was supported with a good balance of story to keep you pushing forward. Patience is required if you’re looking to 100% every dungeon level, but you’ll be rewarded with new weapons and upgrade cores. I’m glad I came across this game, and that’s the beauty of services like Xbox Game Pass that give you an opportunity to try games you may ordinarily overlook.

Creature in the Well is rated PG and available to play on Steam, Nintendo Switch and Xbox One. The game is part of the Xbox Game Pass catalogue and uses Xbox PlayAnywhere so you can resume your game when switching from PC to Xbox.