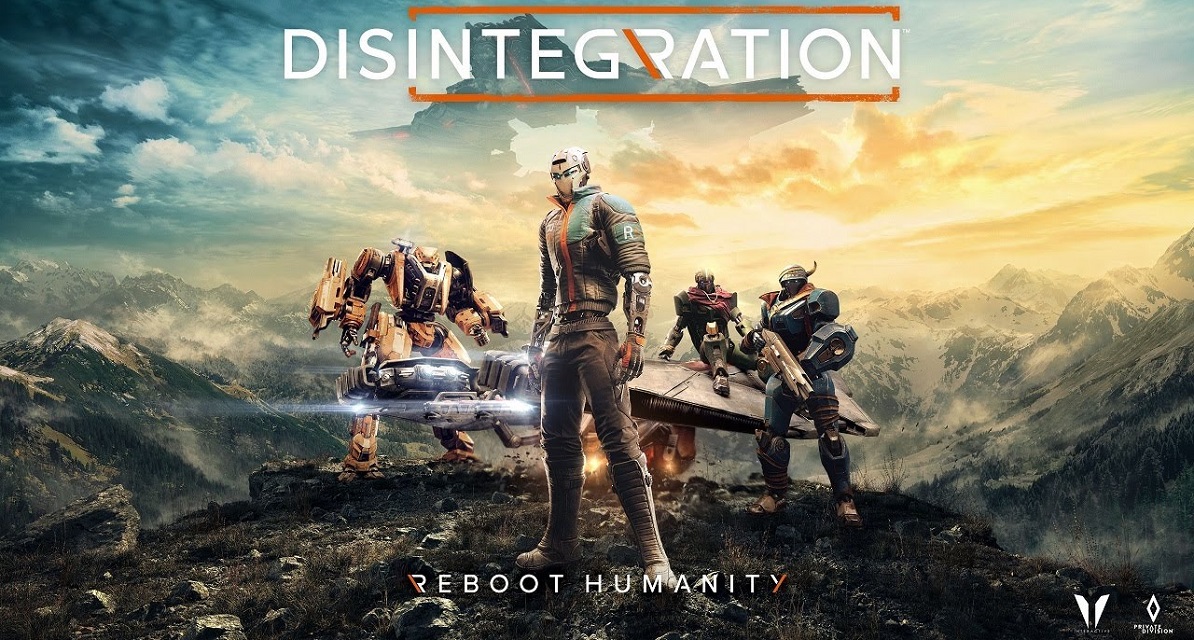 “Disintegration is an interesting hybrid of FPS and RTS gameplay with a story that is engaging from mission to mission, but not too memorable once you log off.”

Disintegration is a sci-fi FPS with RTS elements, developed by V1 Interactive and published by Private Division. The game was released on Steam, Xbox One and PlayStation 4 on June 16, 2020 and was directed by Marcus Lehto, the co-creator of the Halo series. On initial inspection, you would be forgiven for thinking the game looks a bit like Halo and a little like riding the personal vehicles in Destiny. I thought the same when I first saw the teaser trailer last year. It was not until I played the technical beta in January 2020 that I learned how we would be controlling the unique Gravcycle while commanding our squad below.

Set 150 years in the future on Earth, the only hope for human survival is through Integration, a process developed to preserve human brains in robotic armatures. You play as Romer Shoal, a former Gravcycle pilot who has been captured and tortured by Black Shuck of the Rayonne. These dark forces are set on eliminating all remnants of human society. You managed to escape thanks to a band of misfits Doyle, Coqui and Agnes. On the ground, you meet up with an old Natural called Waggoner, a wise old man who agrees to let them stay at his base, so long as they help the Outlaw resistance fight back against the invading Rayonne. I love the banter between the squad mates and Waggoner with his knowledgeable wise cracks.

Think of this when you are playing an RTS game. Your viewpoint is above your troops and you are giving them commands as you play. In Disintegration, you are given a squad of 3 or 4 soldiers and give them move and attack commands, only this time you are hovering above them in a gravcycle that has mounted weapons so you can assist in battle. Initially I tried to do a lot of the shooting myself, considering this is an FPS after all. However, I quickly learned that the gravcycle weapons were not effective against the enemy alone and I had to focus my squad to help destroy the target. Right clicking the enemy allows your squad to focus fire on the enemy and together with my weapons, can take down the early enemies pretty quickly. You can also press spacebar to boost out of the way of incoming missiles, so the maneuverability of the gravcycle feels smooth and agile.

The tutorial within Disintegration is a good one that I recommend you do first, teaching you the basics of maneuvering the gravcycle to avoid obstacles as well as commanding your squad. You learn that flying the gravcycle is not just a matter of being able to fly anywhere you want to. You need to negotiate terrain, buildings and other obstacles, and you must have ground beneath you, otherwise the gravcycle will fall away. You feel pretty invincible up in the sky, however you quickly learn that if you get too close to the action or position yourself poorly in relation to the enemy, they can quickly overwhelm you and the squad. There are four difficulty modes in Disintegration – story, recruit, maverick and outlaw. I chose the maverick difficulty level which is the recommended level, providing a balance between story and squad management.

The outlaw difficulty has enemies that will repair themselves and have increased damage and survivability. I’m glad I didn’t go for outlaw straight away because, whilst the early missions felt almost too easy, the difficulty quickly ramped up, especially if I didn’t look after my squad and positioned myself too close to the action. Some of the missions are very long too, taking me 45-60 minutes to complete, which included dying numerous times. There are checkpoints thankfully, but there were times when I would die and had to repeat major battles from scratch which got a bit frustrating. The scenery and environments are stunning detailed though and the game ran really smooth, so the frustration was only short lived as I got back into the fun of the hectic gameplay.

The initial gravcycle has an alternate weapon called an NRD Seeker that allows you to shoot heals at your squad, subduing their cries for help. Later you can use a medium gravcycle with dual shotguns, and a heavy gravcycle with sticky grenades. There are also items within each level that can be activated by your squad to create a healing area for you and the team. This is one of the primary methods to heal/repair your gravcycle mid-mission. Other times some enemies drop smaller healing clouds which you can order your squad to use. If a squad member dies, their ‘brain can’ is left on the ground so you must fly down close to pick it up. That member then respawns after a short timer.

Each squad member has a unique ability that you control within missions that work on cooldown timers, so knowing when to use each ability, and combining them together, is the key. Agnes and Coqui have concussion grenades that can stun the enemy, Doyle has a mortar strike and another companion Seguin has an awesome ability called Slow Field. As the name suggests, the slow field will slow down any enemy units caught within it. Couple this with Doyle’s mortar strike and you can create some impressive kill zones. When in general combat, the squad have reasonably good AI, taking cover behind walls and flanking the enemy where possible. There are times when an enemy unit will go around them and be shooting them close-range from directly behind them, given their focus is on units in front of them. This is where you can start shooting from the gravcycle, and right-click this enemy unit to have your squad focus their fire.

Cutscenes are shown at the start and conclusion of each mission and these keep reminding you of the overarching story that you are playing out, however there are a lot of assumptions made in the story. I played the game over successive gaming sessions with days in between and I couldn’t really remember what happened previously. Thankfully, in between missions you will find your team spread about a base or in the field and you’re able to talk to each of them to hear some of their backstory or to pick up challenges for the next mission. The voice acting for each character is good enough to give each member their own character. It’s here where the story develops further, showing you relationships between the team but more importantly, their experiences with integration. I did find it strange though that some of these staging areas were quite large, yet Roamer has no ability to sprint, so it’s a slow jog to the next squad member. Similarly, despite having invert mouse turned on in options, I’m forced to use non-invert mouse controls in this area only. Seemed a bit strange and off putting initially.

Disintegration features three multiplayer modes – zone control, collector and retrieval. In zone control, crews compete to hold three key areas for as long as possible. Gravcycles alone can’t be used to capture zones, so you have to position your squad on the capture point and protect them as best you can. In collector, you face off against one other team and must collect as many brain cans as possible. You collect three brain cans from killing the enemy gravcycle, 1 brain can from their squad units and there are also static spawn points across the map. Retrieval mode consists of teams of attackers and defenders. Attackers need to retrieve cores and deliver them to the drop zone which will be heavily guarded by the defending team. The team with the most cores collected within the timeframe wins. Similar to zone control, cores can only be carried by squad members on the ground so protection of your squad is key. This reinforces what you learn about squad management and placement from the single player campaign.

Overall, I gave the game a 7.5/10. Disintegration is an interesting hybrid of FPS and RTS gameplay with a story that is engaging from mission to mission, but not too memorable once you log off. The gameplay is great fun, flying the gravcycle above the action while commanding your squad with varying abilities. It does get repetitive though, especially in some of the lengthier missions where checkpoints are spread far apart. I am looking forward to seeing what comes next from the team at V1 Interactive.

This review utilised a Steam key provided by Koch Media. Disintegration is available to play on Steam, PlayStation 4 and Xbox One.