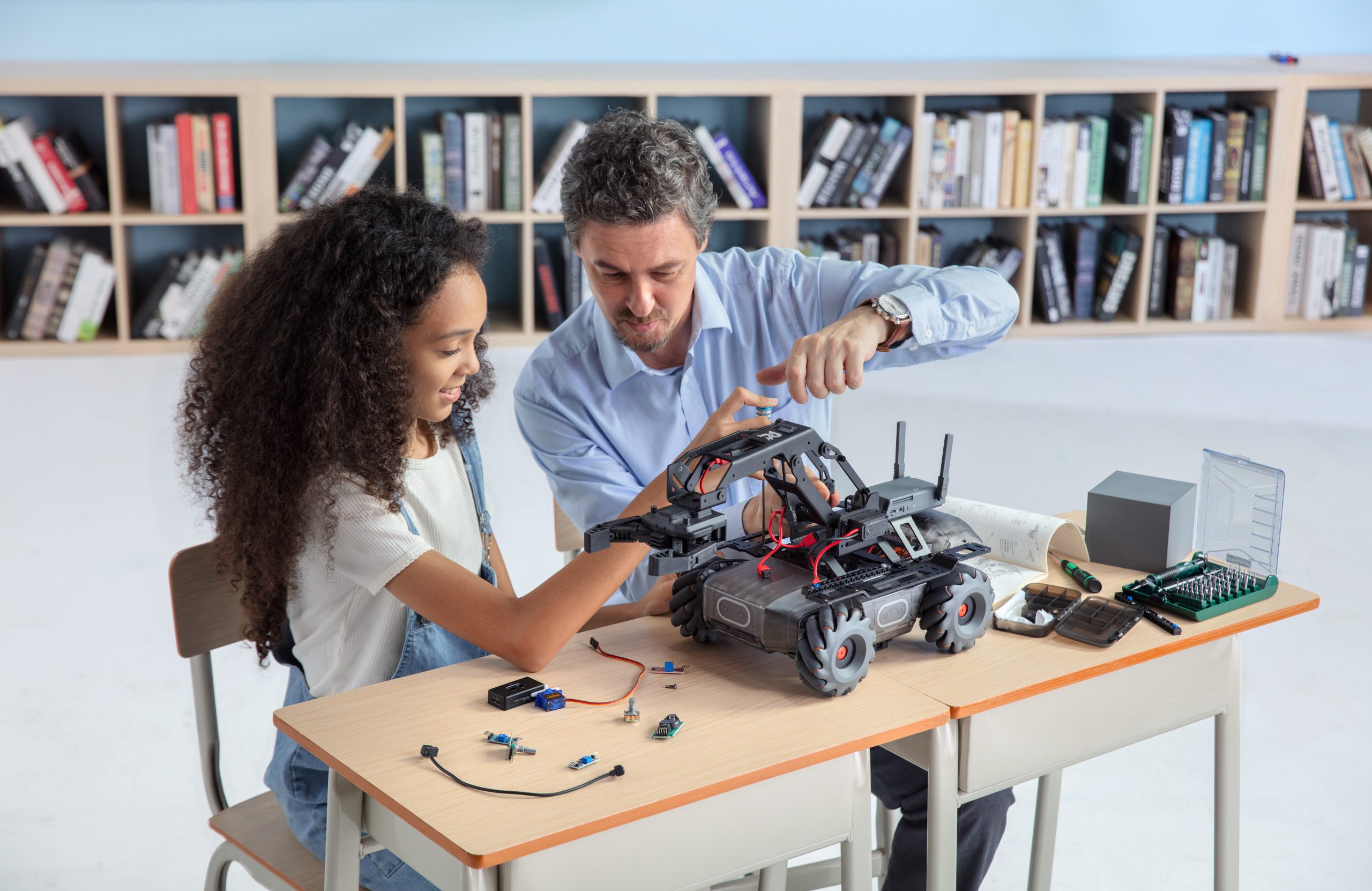 DJI Robomaster EP Core: A Review Of An Educational Robot

ROBOTS are super cool, regardless of whether they’re fastidiously cleaning Jupiter Mining Corps space ships, being the bad guys in pulp novels, striving to become human, or trying to open their own theme parks with gambling and adult entertainment.

Of course, real-life robots are less like C-3PO or Optimus Prime and more like an autonomous vacuum cleaner or part of a car assembly line, but the field has been making huge advances in recent years and is one of those areas that are obviously going to become a lot more important than we appreciate right now.

Manufacturer DJI are best known for their drones but have recently moved into the robotics space, with their latest offering representing their second foray into making a robot.

The DJI Robomaster EP Core is a miniature version of the sort of thing you’d expect to see rolling around the surface of Mars, with four wheels (featuring multi-directional treads), a metal skeleton frame, grabber/claw arm, and a video camera with microphone and speaker.

The unit is powered by a removable rechargeable battery, similar to the type found in most modern digital cameras, and connects to a computer, tablet or mobile phone via wi-fi or Bluetooth.

It’s a robust and well made unit; the build quality was very good with no loose parts or wobbliness, and when I picked it up I never found myself worrying I might inadvertently bend something.

It’s tempting to look at the EP as an expensive radio-controlled (well, Wi-Fi or Bluetooth controlled) toy, but it’s more than that. There’s a host of educational opportunities here to learn about AI, coding and pathfinding involved and engineering in general – it made me think of a much more advanced version of the Lego Mindstorm kits we had when I was in high school, although the Robomaster EP is much more advanced than that.

Programming the robot – which can be doine using the Scratch or Python languages – to do things like navigate a course (via distance travelled or using visual markers detected by the camera) was a lot of fun. This is done via the app, which also contains a range of useful elements including an introduction to programming.

The unit is incredibly versatile – full of inputs and compatabilities beyond my current expertise, including Raspberry Pi and Nvidia Jetson.

Honestly though, the most fun the kids and I had with the robot was manually controlling it via an iPad and driving it around the house and backyard.

The controls were pretty simple – more or less the same as most mobile games – and easy to use, and the video imagery was clear and lag-free. The unit responded promptly to inputs and it was extremely manouverable too, even able to effectively “drift” when cornering if the user so desired.

Being able to see the house from the same level as the cat was really interesting, and also provided a great education for the kids in how what looks like a small obstacle from our perspective can be a bigger hurdle from a different one.

The grabber claw could manipulate some objects (the arm moves up and down as well as forwards and backwards, while the claw itself opens and closes) but I couldn’t use it to do things like pick up a can of drink, although I’m told the unit can actually do that so it might have just been an issue with the review unit (which had been assembled when I got it) and may have been missing a connector pin or similar.

I could use the claw to push and pull objects, though, such as knocking a small ball around, and the claw arm could lift things like a teacup (which I balanced on the claw itself).

The robot was surprisingly fast too – about the same as a remote control car, which was about as fast as you’d want it going inside anyway. The battery lasted about an hour, which would be a good length for a lesson and also provided an opportunity to get the robot away from my kids.

While my kids are still in early primary school and didn’t get as much out of the programming side of things, for someone with teenagers studying Science/Tech/Engineering subjects at high school (or university) this would have a lot of very practical and educational applications.

I understand that at this stage the unit isn’t available for sale to the general public, but educational institutions can order them from DJI – the cost appears to be around AUD$1580 each but you would need to confirm the specifics with DJI.

Still, if you are involved with your local school or want to make a helpful suggestion for something their next fundraising effort can help, it seems hard to go past one of the DJI Robomaster EP Core robots. After all, who knows if you’ll end up inspiring a future game programmer, AI engineer or roboticist as a result?