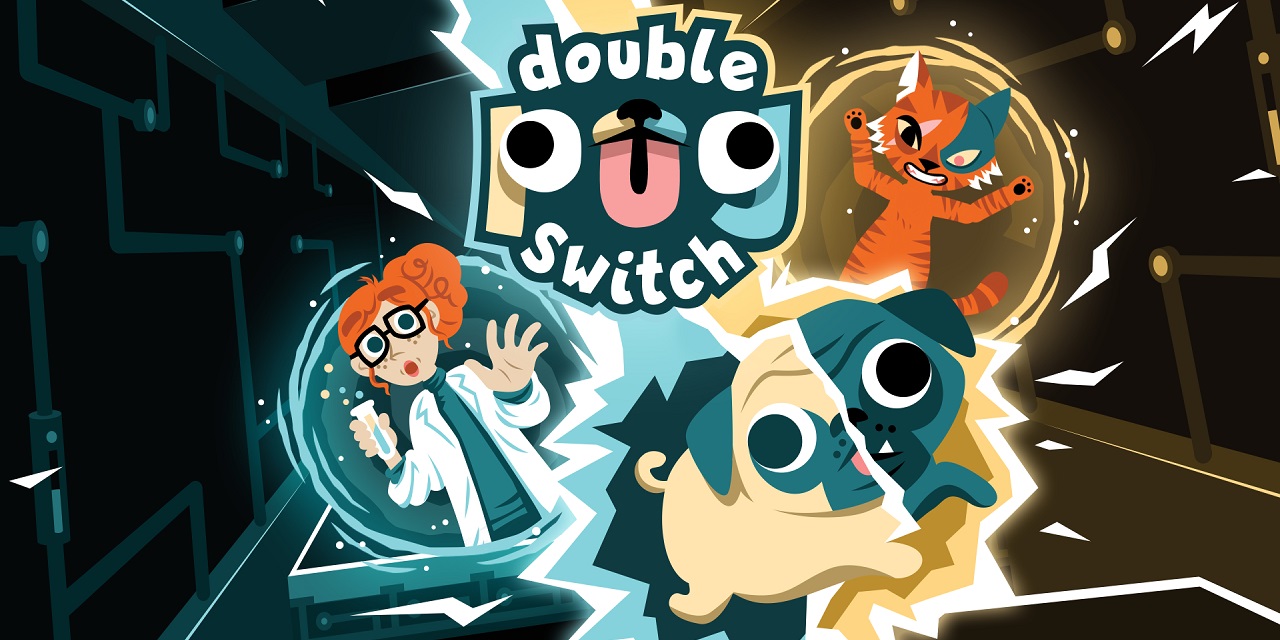 Double Pug Switch is a 2D precision platformer by The Polygon Loft that released on all platforms on October 22, 2020. It’s one of the more difficult platformers I’ve played this year. It has some interesting mechanics with the main one switching dimensions at the press of a button. However the fact that Otis, the game’s primary doggo character, is set to autorun made it a lot harder than it should have been.

Otis is a pug dog and the loyal companion of the Professor. The Professor also owns a cat, and like my cat at home, if they see something fragile sitting by itself on an otherwise clean desk, they take it upon themselves to swipe it off the desk. Whiskers sees some vials with fluids just sitting innocently on the lab table and, in slow motion, knocks it off the table. This causes a portal to open sucking Whiskers and Otis into an alternate dimension of the lab. This places you into a tutorial level of the game.

The Professor is able to communicate with Otis but whilst I was prompted to press A on my controller, it wasn’t accepting any input from the controller. Tabbing out of the game and the controller was fine, so it was in-game. Spacebar worked so on the conversation went. The Professor told Otis to be a good boy, find the naughty cat and bring him back. She tells us to remember puppy training and tap the button to jump and hold it down for a longer higher jump. The game then commences and Otis is off running across the screen, flinging himself off the edge to my first death in the game. Pressing A on the controller didn’t work. I think that’s a record for my quickest death in a platformer, ever. I tried pressing spacebar, ctrl, shift but nothing was working.

I could pause and access the menus with the controller, but not scroll the menu. Using the mouse I got into settings but there is no option to view the keybinds, nor change them. I then proceeded, over many doggos deaths, to mash the keyboard until I finally found the controls. You need to use Z to jump, X to switch dimensions and C to bark. That was a lot harder to work out than it should have been and as a suggestion to the devs, those binds should be communicated to the player before taking control of Otis. Once I knew that, I was able to progress past the first screen finally. We come across the first checkpoint and then some spikes on the floor, giving me memories of The Impossible Game. I can now safely compare Double Pug Switch somewhat to The Impossible Game as I ran into so many of those damn spikes, and they weren’t just on the floor either. With Otis running across the screen at a defined speed, I died a few more times trying to time his jumps between blocks and pits of spikes. At the next checkpoint we learn that we’re in a destabilised quantum state as we are faced with a blue wall blocking our path.

The professor tells us we have a twin brother in a parallel dimension that we can switch to, hence the title of the game, Double Pug Switch.Pressing X on the keyboard changed Otis to a blue colour, and made the wall in front transparent so he could run through it. A yellow wall was next, so pressing X changed Otis back to normal, the blue wall behind Otis went solid and the yellow wall in front went transparent. Switching again I could see a yellow platform across a gap, but in trying to press X to change dimension and jump across the gap, I died again, and again. The next platform was blue, so you have to switch dimensions, but don’t do it too early otherwise the platform you’re on goes transparent and you fall through it. There’s definitely a huge learning curve here in anticipating the dimension platform in front of you, timing the jump to cross the gap, and switching dimension mid-air to land on the appropriate platform. I managed to finally finish the tutorial level after 5-minutes and it felt like I’d played multiple levels in other games.

Once past the tutorial, each level has yellow coins as well as rare purple coins to collect as you try to jump and switch dimensions as you tackle increasingly more difficult level challenges. Later on you’ll come across powerups that allow you to explore new areas of the levels and to help collect those mysterious purple coins, though with the set scrolling speed of Otis, I tended to either miss the powerups or they shot me off and I wasn’t coordinated enough to time my landings well. The coins you do collect are used to purchase funny hats for Otis to where in his adventures which range from a Fedora, to a glass jar with a brain it, to a T-Rex head. Whilst it was fun to unlock these hats initially, the shine and incentive to get the purple coins wore off quickly as they were placed in increasingly hard and frustrating to reach places. One thing that did keep me persisting was seeing the checkpoints progress at the top of the screen, giving me something to aim for. Also you get a red progress flag where you last died, so it was a satisfying mini-goal for me to get past that each time I respawned.

There are 32 levels spread over 4 dimensions with a boss fights against Whisker’s evil twin, Lord Sker at the end of each world. These again each took a bit of a learning curve (and a few deaths), but were the more fun aspects of the game for me. The music and artwork of the level is very well done, and it’s a shame that the difficulty of the levels ramping up so quickly made me not able to enjoy the whole experience. Whether it’s because I’m getting older and my hand-eye coordination is getting worse, or maybe it was the Z and X keybinds being where they are, but I really struggled with Otis’ speed of scrolling and timing my jumps with switching dimensions mid-air, or even just pre-empting the switch. I believe if we were able to control Otis ourselves allowing us to go left and right, backwards and forwards at our own pace, it would be a much better and less frustrating experience. I do understand this would take away much of the difficulty with having to switch dimensions with little reaction time – perhaps too much. That is just my experience from the couple of hours I spent in the game, and I unfortunately didn’t have the patience to complete it.

Overall, Double Pug Switch was just too difficult for me to enjoy to it’s fullest. If the controls could be rebound by the player and some quick keybind instructions displayed upfront as part of the tutorial, I think it could be a much better experience. I hope other platform game fans are able to overcome the difficulty and succeed, as Double Pug Switch does look good with great level design and a good concept behind switching dimensions. 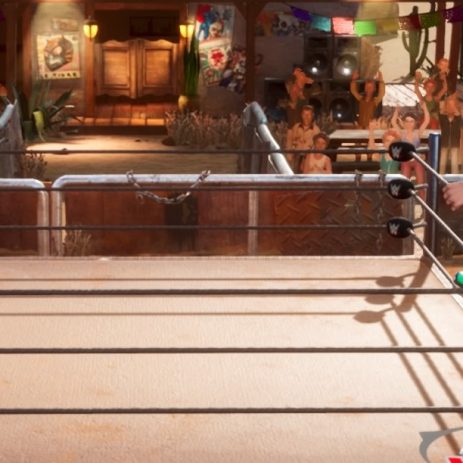