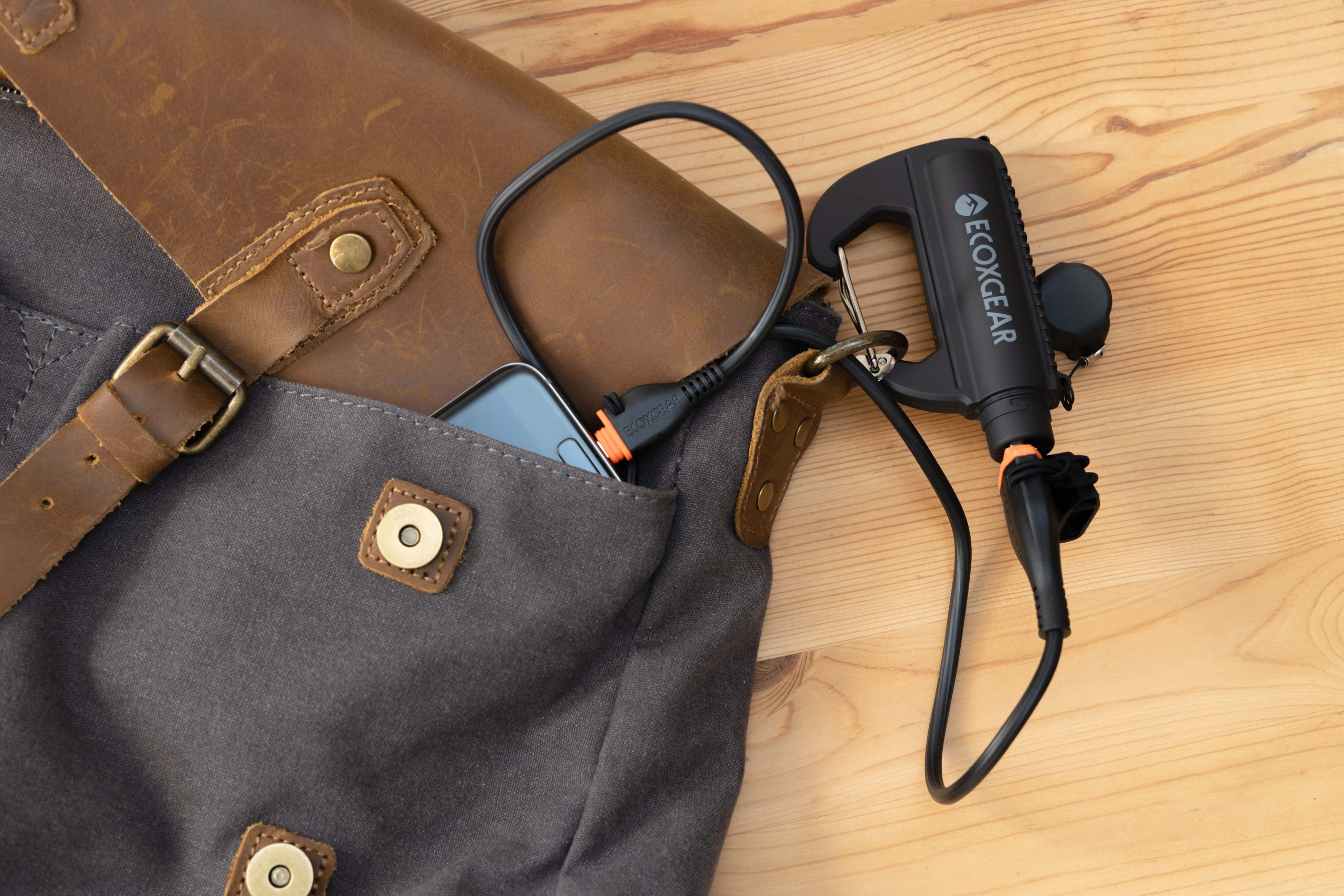 WHEN I’m not being your friendly local technology and features editor or writing about video games, I quite like doing outdoors stuff – but given I’m doing it in the 21st century, I’ve always got at least one electronic device on me.

Having portable juice is important, but so is not having said portable juice compromised by getting rained on or dropped or whatever – which is where the EcoXGear EcoXCharge Clip carabiner powerbank comes in.

Featuring a rechargeable 3350mAh battery, the EcoXCharge Clip weighs 500g and measures 11cm long by 6.5cm across and 2.2cm deep. There’s a standard USB-A plug where you can connect a cable to attach to your phone etc; and a Mini-USB jack for charging the battery. A screw-on cap (attached by a length of cord) helps make the unit waterproof and also protects the charging port too.

Fully charging the EcoXCharge Clip takes about three hours – longer than I’d like, but I appreciate we’re not talking about a high-end smartphone with adaptive charging technology here.

3350mAh is more than enough to be useful – charge was able to restore 38 per cent battery to a flat Nintendo Switch, and about 75 per cent to my smartphone with a 4300mAh battery. It also put a big chunk of battery level (about 20 per cent) into a 12.9in iPad Pro too – so its applications for gamers are very clear.

The powerbank was also capable of powering my Garmin GPS64 (which normally runs on AA batteries), which adds to the usefulness – and reasons to keep it clipped to my backpack.

The ExoXGear EcoXCharge Clip has an IPX7 rating, and IPX7 standard is able to handle being submerged in 1m of water for 30 minutes – in other words, don’t take it scuba diving, but if it falls in a river or the bath it will be fine.

I tested this myself – using a swimming pool and also a full bath – and it survived the experiences totally unscathed. I was able to fish it out, dry it off, unscrew the end, plug the USB cable into it and it worked perfectly.

The carabiner clip is strong and very useful; whether the EcoXCharge was atttached to my hunting backpack, my laptop bag or my everyday satchel it looked the part, and stayed on securely.

I would have liked to have seen a compartment for storing a USB cable with the battery, but that’s very much a ‘nice to have’ and doesn’t affect the unit’s functionality.

The main issue I had with the powerbank is it’s rather slow to charge things – it’s a 5V 1A output, which is standard USB level, but

While the EcoXGear EcoXCharge Clip is not likely going to sustain you on a multi-day camping/hiking/hunting/fishing trip, it’s ideal for day trips – great for taking to the park, sports events, or pretty much anywhere else you might need a power top-up to keep your gaming or social media connectivity going –  and I was impressed with its ruggedness and usefulness overall.

With an RRP of $49.99 it’s well priced, functional, sturdy, and with Christmas coming would be an excellent gift for the outdoorsy person in your life too – or something to drop some hints when people are wondering what gaming-related stuff they could get you, for that matter.