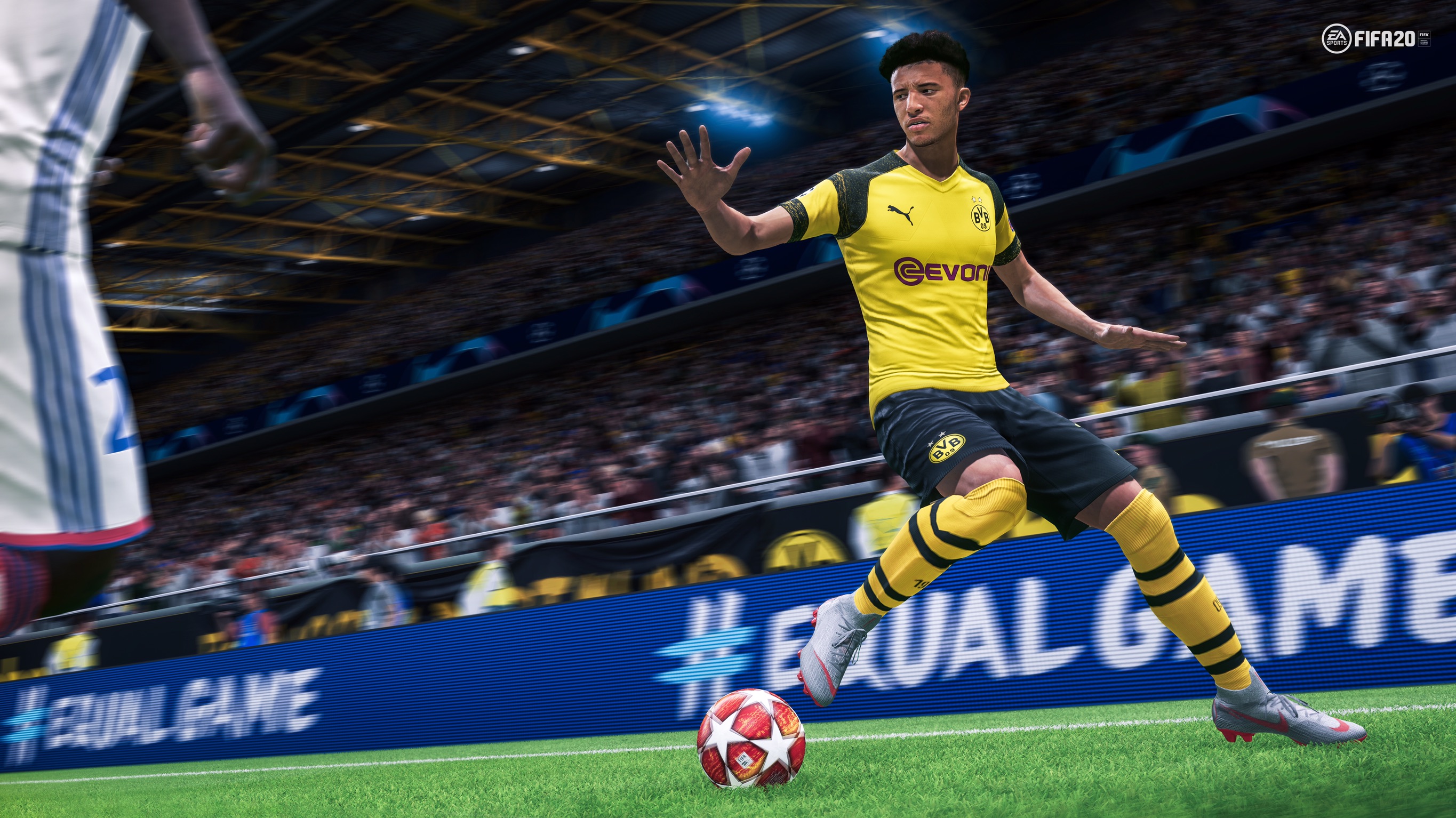 Growing up there was a certain gaming phrase that was two letters and five words long that defined a generation of sports games. Once you heard it during the loading process, you always knew you were in for some fun, whether it be playing solo or playing with a group of friends.

Now it has been a few years since we have been able to hear the dulcet tones of one Mr Andrew Anthony who first said that phrase all the way back in 1993. Just as the Earth orbits the Sun, so shall Electronic Arts release its annual football offering. FIFA 20 could very well be the best one yet.

FIFA 20 is the latest offering from EA, also known for its titles in the sports worlds of American Football, Ice Hockey, Basketball and MMA. FIFA’s first iteration was unveiled to the world in 1993 and has been forever evolving ever since. Since 2018, the FIFA franchise is the largest selling sports franchise in video games selling a massive 260 million copies since its original release, with only Mario/Super Mario, Pokémon, GTA and Call of Duty ranking higher. To give you an idea of how important the FIFA franchise is to EA financially, FIFA Ultimate Team made up 28% of the company’s total net revenue in the most recent fiscal year. That, my friends, is an unfathomable amount of packs purchased by the punters of this iconic franchise.

But you’re not here for stats and financial figures, you want to know if this game is worth spending your hard earned dollars on, right? In a brief TL;DR answer, if you like FIFA then yes, you’re more then likely going to want to check this one out. Now, here comes the slight disclaimer of this review. The last version I had in my collection was FIFA 18 because I didn’t feel the need to purchase what I believed to be the same offering year after year. I’m not a hardcore Ultimate Team mode player, I’m more of a career/franchise style player when it comes to sports games, but there’s a few returning aspects plus something not seen in the FIFA world since 2012. So let’s dive in to some of the details with the good, the bad and the ugly of FIFA 20!

Graphically this game is simply stunning. If you are like me and have a subscription to Optus Sports so that you can watch overseas football leagues, the first thing that you will notice is the likeness to the television presentation. Player models in the introduction and then in-game, are arguably the best they have ever been. Simple things like player fatigue is extremely noticeable in the player models. From the start of each kick off through to the end of 90 minutes, the visible fatigue and perspiration looks great. The stadium models look fantastic, with sideline advertising that link to the teams major sponsors, really enhances the gameplay experience. The crowd models have been drastically improved, most notably fans ducking when a ball flies over the crossbar into the crowd or running towards the front of the goal line part of the stands when the home team scores. Weather gets a bit of an upgrade as well, with heavy rain conditions now slowing ball movement down and forming puddles in areas off the pitch where no gameplay occurs. The grass models take a beating with obvious wear and tear on the pitch, with divots and grass damage from slide tackles staying visible until the end of the game.

Old favourites in the commentary Martin Tyler and Alan Smith make their return to really add to the whole Sky Sports telecast feel of the game’s presentation. I honestly believe the day that these two aren’t part of the FIFA franchise, it honestly just won’t have the same feel. For something as simple as colour commentary it really adds to the experience. The commentary does have its occasional moments of madness, especially when having a shot on goal and the volume of Tyler hits 11, but apart from that I never had that feeling of something not making sense. You can also choose your commentary team either having Tyler and Smith, or Derek Rae and Lee Dixon who are also well known commentators in their own right. Crowd sound feels spot on with all the classic sounds and cheers that you would hear in real life. I noticed some great added atmosphere when either trailing late or trying to break a tied game, especially late in the game where the home crowds noticeably get louder to support their team to get them over the line. Like previous FIFA games the soundtrack is full of bangers!

There’s been a complete rework to the set piece which I feel is a welcome change from the previous years mechanics that almost felt “hit and hope”. Users now have more of an idea of targeting with a circle that directly relates to the player ratings for free kicks or penalties. This gives the player much more of an idea of where the ball will actually go. I know I can count on one finger how many times I scored a free kick goal in FIFA 18 and my reaction was more of “how the hell did I do that” rather then any skill. Now, for those who remember the glory days of the set piece from FIFA 14, this new mechanic will feel very familiar and for the better.

Volta is the all new feature in FIFA 20 replacing the last three years of the story mode/narrative known as ‘The Journey’. Volta is a flashback to the standalone FIFA Street series last seen in 2012 (ironically Volta in Portuguese translates to “The Return”) and in my opinion it’s a welcome addition to the franchise. The arcade style of Volta is a great gameplay experience that brings all of the great skill moves and passing of the regular 11 vs 11 style of football, compacting it down to 3v3 rush (no keeper), 4v4, 4v4 rush, 5v5 and a professional Futsal mode. Volta offers different pitch styles and sizes, allowing players to use the environments of the pitches such as the walls of some arenas to make passes or to use push off moves so not to lose any momentum and speed. Overall Volta is a brilliant addition to the game and I found myself playing this mode more then anything else in the game.

FIFA Ultimate Team (FUT) is more or less the same style from last year at its core, except for a couple of changes that I think will add some cream to the cake. There is a new level of customisation for your squad including celebrations, stadiums themes and giant player banners. EA has also introduced FUT Friendlies, a new game mode that doesn’t use any player contracts or fitness as well as not counting towards your club’s overall record. With the friendlies option you can also add modifiers with the popular House Rules making its debut in the mode.

Outside of Volta, the general gameplay felt sluggish and slow. The passing is as good as its ever been but I often found myself frustrated with the A.I at times being confused with why team mates were running to the wrong areas when trying to slot the through ball. One thing that has been a bit of an issue in the past was the speed of the players. Attacking players with speed ratings in the high 90’s were often chased down by defenders in the low 70’s. Thankfully this has now been rectified but it felt like it had come at the cost of how slow the ball felt as it was moving because of the general ball physics. It’s not a game breaker, just more of a frustration point that occurs every now and then.

Licensing issues have definitely taken some shine off of the game. There are a few iconic stadiums that have historically been in the game have gone missing because of another publisher having the rights. There are even some iconic team such as Juventus having to be rebranded as another team with the same colours but different name, although all of the players are still there which I’m sure is more of a reflection of Ultimate Team then anything else.

Now to the part that isn’t all sunshine and happiness. Career mode. As of writing this review, the career mode is completely broken and has been the victim of most negative feedback about the game especially seen on social media. I completely understand and fathom the difficulties when creating video games and I’m really not trying to bash any of the developers, but it feels very much unfinished and almost to the point that it wasn’t play-tested in order to get the game out as quickly as possible. One could speculate this was so that the microtransactions found in FUT could generate as much revenue as possible. Thankfully the issues in career mode have been acknowledged and identified by the developers with the promise of a patch to be delivered in the near future, but like I said in the start of the review the career mode is the main mode that I focus on in the FIFA franchise, so this initial offering just felt like such a let down. Hopefully this can be resolved sooner rather the later.

Overall for FIFA 20, the addition of Volta isn’t enough to make up for the issue of career mode which is a bit disappointing, but I will be more than happy to revisit this review in the next couple of months post patch that will no doubt bring career mode to the level that was expected at launch.

If you’re like me and have missed a year or two between titles then yes, I think FIFA 20 is definitely worth a look. If you are a hardcore player that purchases the title year after year for the standard modes like career or FUT then you’ll really need to make that tough call on whether or not you want to purchase now or hold off until the fixes have been made.

There’s no doubt in my mind that this year’s version is technically the most stunning version of the franchise. Amazing graphics, great sound and a genuinely fun new game mode definitely outweighs the issues of career mode. I just cant help but to think where this game could have been, rather then where it is now.

This review copy of FIFA 20 was provided by our good friends at EA. FIFA 20 is now available on PlayStation 4, Xbox One, PC and Nintendo Switch.