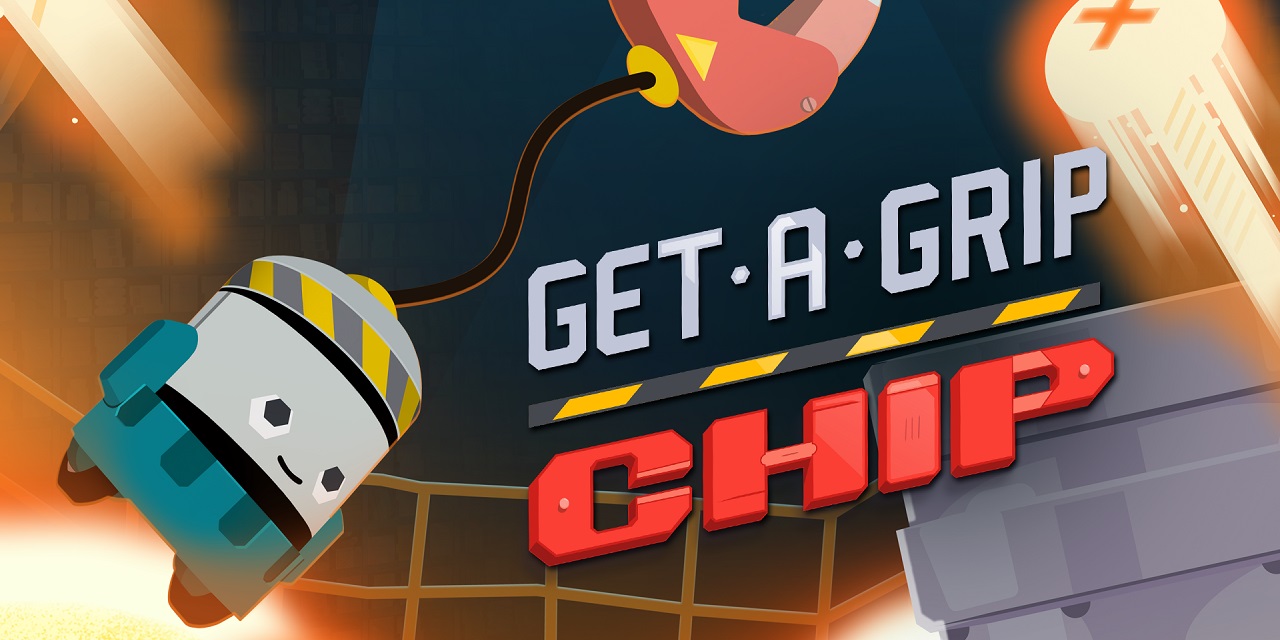 Get-A-Grip Chip is a single-player 2D platformer by Redstart Interactive and released on Steam on October 17, 2020. I’d had never heard of the game prior to this review. After watching the trailer, I wasn’t exactly sure if the game itself was for me. I still decided to give it a crack as you never know when a small indie can blow you away with the little gem they’ve created. To my surprise, Get-A-Grip Chip ended up being exactly that: a hidden gem. It’s an amazing indie title that seems to have a flaw. Mainly the fact that it is only a PC exclusive and not available on the Nintendo Switch, where it would shine!

Get-A-Grip Chip features a story but isn’t exactly complex or the game’s focus point. You control Chip, a robot set to rescue the small battery bots that have been scattered and hiding around the big factory. One of the supervisor robots malfunctions and tears the place down. Chip can’t attack, jump, or defend against threats and if anything touches you, you’re toast.

Chip is a non-violent hero and has a small grappling hook that lets it cling on to certain targets and surfaces. You rely on this grappling hook to climb/swing to platforms and solve puzzles. You have to combine that feature with momentum-based jumps and a very loose, yet responsive aiming system. They say it’s better to use a controller for this game though I was on a laptop. I was clicking madly trying to traverse obstacles and finish each level as quickly as possible, keeping in mind to find all the battery bots and save them.

Each level is designed cleverly and impressed me a lot. I feel Redstart Interactive were inspired by the classic Nintendo platformers with the level design, progression system and difficulty within the game. It constantly throws in new obstacles and gameplay features at a steady rate. Levels start off with a simple obstacle that will become their main feature, with gradually harder puzzles being introduced in a very natural way. The gameplay of Get-A-Grip Chip is intuitive such that you will quickly learn how to hop around each level with ease once you “get a grip” on the mechanics.

There are eight battery bots you can find and rescue in each level. You don’t need to save them all in order to beat a level or the whole game. The way they’re so well-hidden makes you want to replay each level in order to find the those tricky ones. It’s not the hardest of challenges, but you will need to pay attention to not miss the cues. For the curious players, if you see something that looks quite odd in a level and decide to explore it, chances are there is a secret room with a bot you have to rescue.

At the end of each of the five worlds, the level becomes a chase section mixed with a rhythm platformer. It felt like it had a great nostalgic platformer flair. Taking inspiration from some of the best platformers is never a bad thing and the developers did a great job with creating these amazing levels. It also helps that the soundtrack is absolutely amazing with lots of rock, electronic and funk tunes featured throughout the game. I’ll definitely be adding these to my Spotify library!

It’s hard to fault Get-A-Grip Chip. The backgrounds look a bit too similar in each level, which is a given considering it’s based inside a factory. Other than that, the character design and smoothness in framerate make for a really fun and challenging experience for platformer fans.

This review utilised a game key provided by the publisher. Get-A-Grip Chip is available now on Steam.