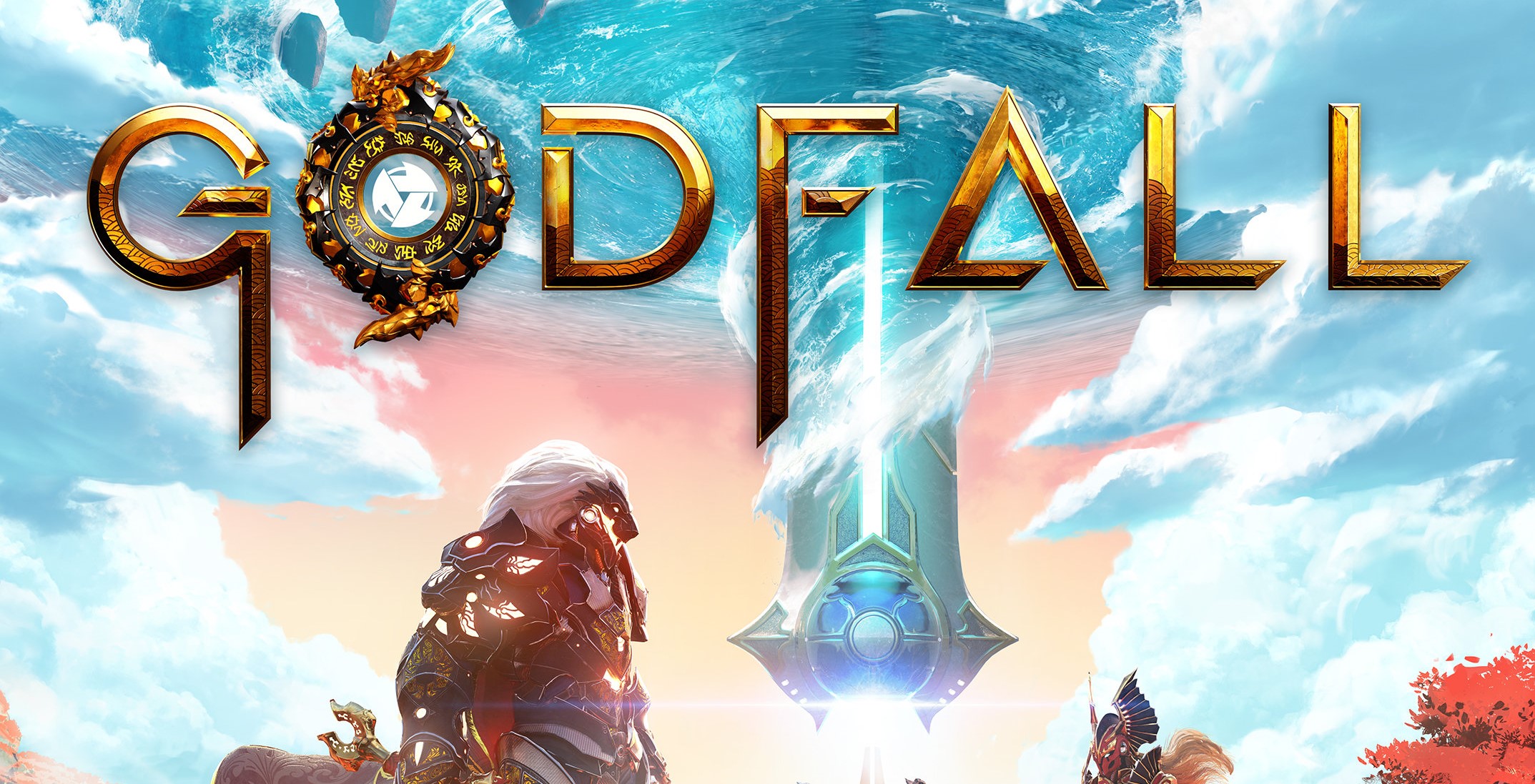 Remember that one episode of Friends where Rachel makes a trifle? From the outside it looked as it was meant to, but once dissected it turned out it was part Sheppards Pie. A very unexpected layer for those only expecting lady fingers, jam, custard, raspberries, bananas and whipped cream. So why am I talking about a layered dessert in my Godfall review? Well for starters this shouldn’t be a shock for those who know me. Food and video games are my two favourite things in the world. While I was playing through Godfall I started to think about layers. Then I started thinking about cake which is where the infamous Friends episode came to mind. Trust me, my wandering thoughts have a point.

The way my experience with Godfall panned out involved cutting through it different styles of gameplay. From the outset, I was expecting something very familiar with some obvious differences. But as I dug deeper, I discovered that while my expectations were correct there were also a couple of surprises and disappointments in store.

Godfall comes under multiple umbrellas as a melee looter-slasher action RPG which has launched on PC and as a temporary Playstation 5 console exclusive. It’s a first of its kind which is no surprise coming from Gearbox. But unlike with their popular first-person shooter RPG mashup Borderlands, it’s their publishing house who are connected to this project. Godfall was instead developed by Counterplay Games, containing developers who also worked on Destiny 2. This is no surprise as there were some similarities from the Destiny series also found in Godfall.

Godfall’s story revolves around two brothers, Orin and Macros, who once fought side by side as Valorian knights. However, war changed everything and tore the brothers apart. So much so that Macros took it upon himself to rid Orin for good. Or so he thought. 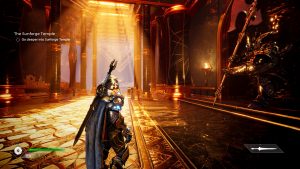 Rising from his “death”, Orin takes it upon himself to get his revenge. But he must do it quickly as Macros’ power is increasing to god-like strengths. Standing in Orin’s way though are five of Macros’ most powerful followers and will first need to be taken down. Which sounds awfully familiar. Left for dead, survived the ordeal, seeks revenge but kills everyone else prior to the leader. Can anyone guess the movie?

Starting off, Godfall felt like a third-person dungeon crawler Souls-esque hybrid. It was like I was playing an alternate version of Diablo. But without the dark creepy vibe. Think Act IV of Diablo 3, very shiny and royal with lots of almost blinding gold. While the overall combat feels like a Souls game, it’s not as brutal or punishing. There’s nothing to lose when you die as you simply respawn and kick off from where you left. That is of course until you reach a boss fight where they will hand your arse to you on the silver shield you came with.

I continued on with the same attitude and mindset that this was a Souls version of Diablo, Path of Exiles, etc. This also meant taking a long time clearing my first main mission. I ignored waypoints and chose to explore every inch of what was now an earthy outdoor setting. It was a huge contrast in what I explored in the beginning yet the same beautiful attention to detail and design was still there. I thoroughly enjoyed the exploration as I searched out for hidden secrets and finding as much loot as possible. However everything I thought I knew changed after entering my next mission.

Transported back to the exact same place as my first mission, one of my early expectations of Godfall was confirmed. While gameplay is very Souls-esque, the overall execution feels very similar to Destiny. Even down to small details like how loot pickups show up in Godfall’s HUD. Missions mostly take place in the same area until you’re able to move onto the next one. To be clear though, this isn’t me saying that this game is Destiny but with melee weapons. There are similar concepts but the two games play differently.

Godfall succeeds in not making it feel like you’ve visited the same place over and over again through out its campaign. Unlike the Destiny series, particularly the first Destiny, worlds feel somewhat large and spaced out, making missions feel like you’re always visiting somewhere new. Just as long as you’re not wandering off like I did at the start. Although it never felt like I spent too much time in each of them either. 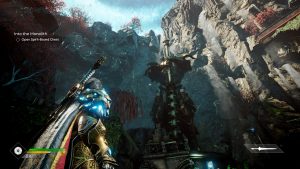 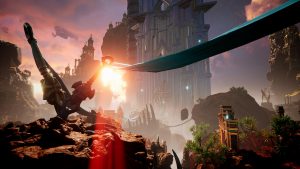 Inspiration from other games doesn’t stop there as Godfall’s combat and weapon system takes a leaf out of the book of another large franchise. Counterplay Games have also been said to have taken inspiration from Monster Hunter by including a variety of melee weapons. This creates a variety of different playstyles adding a new layer to its gameplay. Whether you prefer ninja-like Duel-Swords or slow yet powerful Warhammers, these weapon choices will also play some part in the builds you create.

Between completing basic objectives and defeating Macros’ five powerful followers, there isn’t much more variety to Godfall’s mission gameplay. There’s a large emphasis on boss fights ranging from mid-bosses, main bosses and Hunt mission creatures ala Monster Hunter. But for an online-only game which also allows for multiplayer, it would have been fun to also have dungeons instances or even endgame raids. This is also part of the reason why I’m so confused with Godfall’s requirement to always be online. There aren’t any other players inside your hub or out in the open. However two other friends can be invited to join you in missions. Proper group-based instances are honestly a missed opportunity for this game and I hope we get to see them implemented in the near future.

Between missions you’re transported back to The Sanctum, this is the hub where you’ll be provided mission briefings by a large talking head called the Seventh Sanctum. To give you some context, it sort of reminded me of Zordon from Power Rangers. The Seventh Sanctum will also provide you with the majority of Godfall’s story when you’re either visiting The Sanctum or out in the field. Pieces of lore are also hidden around each area. However these aren’t just random morsels of story for all those lore lovers out there. They actually hold interesting pieces of backstory from the point of views of Orin and Macros.

The combination of both the story execution and how lore is distributed as such is kind of Godfall’s downfall. No pun intended. After seeing the opening cutscene where Macros kicks Orin off the top of the tower, I was expecting a few more cutscenes throughout. But they weren’t there. This was also a problem with the original Destiny where lore was basically a collection of cards you were rewarded with throughout. Godfall’s story would have been better if it wasn’t executed through hidden lore and mission briefings.

When you’re in the Sanctum you’re also able to upgrade and enchant weapons/gear, practice combat moves and swap between different armor sets called Valorplates. Unlike other RPG’s, you don’t start out in Godfall as a particular class. There are 12 different sets of Valorplate armors to choose from which all hold different special abilities and traits, more specifically based on elemental damage.

While they don’t feel overly different from each other in regards to what they’re capable of, Valorplates usually have a particular weapon-type to match with. This is where what weapons you enjoy using come into play. For example, the Phoenix Valorplate specializes in dealing fire damage. This particular armor-set would pair well with a lot of the Longswords made available as they usually contain fire traits. 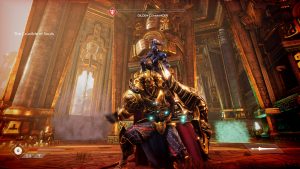 However not all of them are available from the start. Unlocking Valorplates require certain materials which are locked behind progression. In all honesty it shouldn’t affect your overall experience but I can see why this choice has been made. One of my favourite Valorplates that I’ve geared up to be what I believe is pretty damn powerful is one of the last few you can obtain. Without a progression-gate and with the right skill choices/gear, you’d have a much easier time throughout.

As you build your collection of Valorplates you may find yourself jumping from one to the other. However I do recommend either being very organized or sticking with a small few. With 12 armor sets to equip, there’s a lot of juggling in regards to gear as you want different stats for different builds. Unfortunately Godfall’s UI doesn’t cater for this caliber of organization. There are filters for newest, level and rarity but where are the ones for weapon and element types? The already existing filters sort of help but it still became a tedious process when I equipping new Valorplates. As a well known hoarder in video games, I even felt the need to spring clean my inventory.

Your collection of Valorplates won’t be complete until you reach endgame, which for me doesn’t have much staying power. Luckily, it didn’t take very long to unlock that last set of armor. Godfall’s endgame is basically split into two categories: New Game+ style boss fights and hoard mode time trials. Personally it’s pretty lackluster as I don’t see much incentive in continuing any further to obtain better gear. From my experience though, this is where you’d want friends to jump in and help out. Unfortunately I don’t have anyone on my friends list who also owns the game. Nor is there match-making. As previously mentioned there’s no raid content either nor is it known if there will be.

I can understand this endgame being fun for those who like to continuously challenge themselves, however I’m not one of them. Not that I don’t want to be challenged or find the fights too hard. I know that there will be some form of DLC made available next year but what it specifically entails is unknown. I’d rather be able to work towards something greater than fighting the same bosses again at a higher difficulty or seeing how many hoards I can survive. If it was implemented in a seasonal format though I would probably be more on board. Without proper endgame, there isn’t much replayability to it either once you reach the level cap of 50 as there aren’t other classes to level.

As this was a Playstation 5 launch title, I wasn’t surprised with some of the technical issues I came across. The game did soft crash on me about 4 or 5 times, sending me to a game error screen. But my first ever game crash completely shutdown my console. Whether you choose resolution or performance, Godfall obviously struggles after an extended yet short-ish period of time. I wouldn’t even be 2 hours into a session and the game would start freezing momentarily during heavier moments of on-screen activity. Whether this is the fault of the game or the console itself is uncertain. But the fact that it happens after a certain period of time may have something to do with PS5.

The core of Godfall’s gameplay is alright at best with the inspiration it’s taken from other titles/genres. However there is so much more potential with what it’s capable of. Right now it’s good as a single-use only sort of game but hopefully they build on their endgame content in future DLC to make it more appealing. Even if it’s a seasonal “layer” that’s added, I’ll be happy.

Godfall is available now on PS5 and Epic Store.