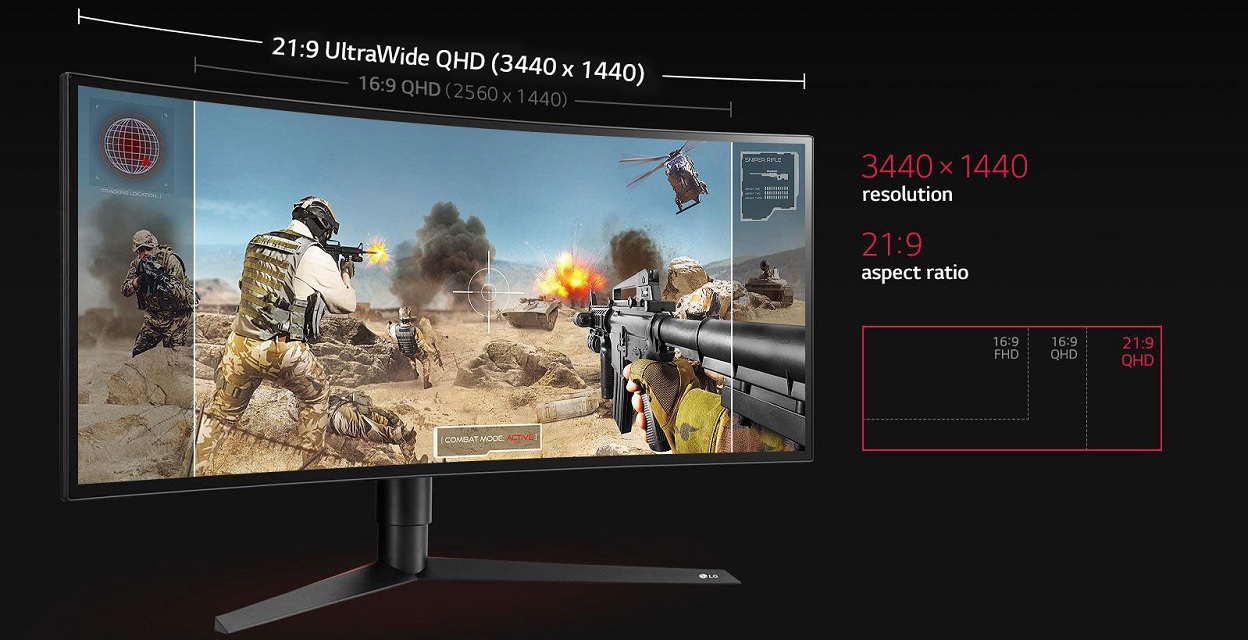 The LG 34GK950F performed way above my expectations with vivid and crisp colours and great performance in games. This is the best monitor I’ve used for gaming to date.

Over the past few years, my gaming monitor has been a LG 27” IPS and I was very happy utilising 1080p with most of my games running well. Some of my mates had upgraded to 144hz monitors and whilst they looked good, I was happy to stick with my 1080p version. Having tested the new LG 34GK950F 34” UltraGear Gaming Monitor, a new monitor purchase has now been pushed towards the top of my wishlist for 2020.

In November last year, LG launched the UltraGear monitor range to the Australian market – the company’s first 1ms response time performance gaming monitors. Six new UltraGear models are available including 27” full HD IPS models up to a whopping 38” curved monitor. There are also two technology variants that are catered to the graphics card that you use – Nvidia’s G-Sync and AMD’s Freesync/Freesync 2. When this range of monitors was released earlier in other countries, G-Sync or Freesync support was restricted by which video card you used. Since then, Nvidia has updated the list of monitors that support G-Sync/Freesync so I was able to utilise these settings. I was able to get my hands on the LG 34GK950F 34” UltraWide QHD IPS Curved Display and I’ve got to say, I’m very impressed.

Back in the late 90’s, I upgraded an old 14” CRT to a 19” monitor. This was a huge upgrade as these 19” CRT’s weighed about 20kg and I remember having to move my head as I panned from left to right across the screen. Now going from my current 27” flat panel to this 34” curved monitor is another giant leap and once again I was hit by the wow factor. I was a bit sceptical of curved monitors at first but now having played on it for a couple of weeks, I love it.

It’s very easy to set up out of the box. Aside from the main panel there is the vertical stand, the base and a box that contains all the cables you’ll require including power cord, HDMI cable, display port cable and a USB3.0 upstream cable. Matte black is the main colouring of all parts of the monitor with a red ring at the rear of the monitor, surrounding the base installation plate and the inputs. There are no rear RGB lights which I was happy not to have. The base stand is a V-shape with red back panels and there is a small red ring at the top of the vertical stand.

The monitor features a borderless design with a thin plastic edge measuring 1.5mm around all sides of the panel. There is a black inner panel border though before the image starts and I couldn’t find a way to remove it, so the total border size is approximately 10mm along the top and sides and 13mm along the bottom edge. I only noticed the inner panel border if I really looked hard. The monitor panel attaches to the vertical stand easily with a quick-release mechanism. This mechanism can be removed if you needed to mount the monitor to a different stand.

The vertical stand height can be adjusted by squeezing either side at the top of the stand and I could do this whilst still seated without fear of toppling the monitor. At its lowest, the bottom edge of the screen is 100mm from the desk and 210mm at its highest, which was my preferred height. It can also be tilted forward/back as well as swivelled from left to right. There was enough friction in the movement that it didn’t feel too difficult or too loose/floppy and I hope it stays that way for the life of the monitor. The width of the V-stand base was wide enough for me to fit my keyboard between the blades, though I like to have the monitor further away from me.

On initial inspection I couldn’t feel any power or adjustment buttons until I found a single joystick controller in the middle of the bottom edge of the screen. This was easy to press with one finger which bought up a quick-access menu to toggle power, input, game mode and settings. The monitor’s volume was controlled by pushing the joystick left/right and brightness using up/down. Selecting settings brings up a larger menu in the bottom right of the screen and this is where monitor details can be fine-tuned. There are eight different game mode presets that are easily cycled through, and each detail can be further tuned individually in this menu. There’s also a ‘reader’ mode which is great if you’re working in a word document or reading a lot of text. However if HDR mode is on, both reader and sRGB options are disabled given the higher colours available with HDR mode.

Now that we’ve marvelled at its design, lets dive right into the LG 34GK950F technical specifications.

With a resolution of 3440 x 1440 and a 144Hz native refresh rate, there’s just so much desktop real estate to utilise. The 144Hz refresh rate is achieved using a Display Port version 1.4 connector, so your graphics card needs to have this option. I’m using an ASUS ROG Strix GTX1060 6gb GPU which only has Display Port version 1.2, so my refresh rate was limited to 120Hz. Most modern AMD and Nvidia cards should have either version 1.2 or 1.4. When plugged in with the HDMI cable, I was getting 50Hz as default. I didn’t notice a difference in desktop use, only a slight difference when gaming.

For word processing and internet browsing, there’s just so much room for activities! I often had multiple browsers going whereas previously I’d have lots of tabs open in the one window. I could have a word document open on one side and the latest news scrolling on the other. Alternatively, you could just maximise what you’re working on and have a nice large space to work with. I streamed some games running at 1920×1080 in a window with stream chat to the side which saved me having to run chat on a separate screen.

When running games at full screen, a lot of the older games that had cutscenes were shown with large black borders around them. I figured perhaps these cutscenes weren’t made with such large resolutions in mind, though the main gameplay is still playable in the full 3440 x 1440 resolution. With the lower specs of my GTX1060, running ultra settings at that resolution and 120Hz meant I was getting around 30-40fps in graphically intensive games like The Witcher 3, Battlefield V, Need for Speed Heat and Kingdom Come Deliverance. Despite the low FPS numbers, the games still felt very smooth to play with no jankiness or hitching from input lag. I attribute this smoothness to the inclusion of Dynamic Action Sync. DAS reduces input lag from your graphics card to your monitor, allowing you to see the action as it occurs in real time rather than after the delay of frame processing. With such vivid colours and lighting, The Witcher 3 looked amazing when looking out over sweeping plains.

In all games, having the extra wide viewing area meant I could see a lot more of the game scene around me. In Battlefield V, this gave me greater control of my surroundings and I was able to spot the enemy on my flanks much quicker than on my 27″ monitor. There were occasions in Kingdom Come Deliverance where I noticed the trees being rendered far off in the distance, but this was easily ignored. Some tweaks to the video settings and I was able to get a solid 50-60fps. One of those new Nvidia RTX graphics card are also high on my tech wish list for 2020!

In terms of using the LG 34GK950F to watch TV shows/movies, I had mixed results. I sampled the movie Solo: A Star Wars Story and an episode of The Walking Dead, both HD versions purchased through the Microsoft Store. Both videos initially played in a reduced sized window with large black borders. When watched with these black borders, you could tell the difference in the richness of the black colour with it being greyer in the movie. My media player has a ‘zoom to fill’ option which filled the screen, and this was much less noticeable in Solo. However, in The Walking Dead episode when it showed dark blacks and bright whites, there was noticeable speckling in those colour ranges which was initially off-putting. I normally sit about 50-60cm from the screen, so sitting further back helped reduce the speckling. This wasn’t the case in Solo so it may just be localised to The Walking Dead episode.

Overall, the LG 34GK950F performed way above my expectations with vivid and crisp colours and great performance in games. This was the best monitor I’ve used for gaming. On ultra settings, my PC specs limited the games to around 30-40fps, though the Dynamic Action Sync from the monitor made the games feel smooth to play. I was sceptical of curved monitors but this model has proven they’re worth the expense with so much desktop space to utilise, or to see more depth in games. This 34″ Curved UltraWide monitor model is valued at AUD$1599 from PC Case Gear, so it’s very much out of my price range however it’s given me a taste of those high resolutions. A new monitor is definitely top of my list to purchase this year.

This review utilised a unit supplied by LG Australia for review purposes. For more information about the LG 34GK950F, head to the LG Australia website.