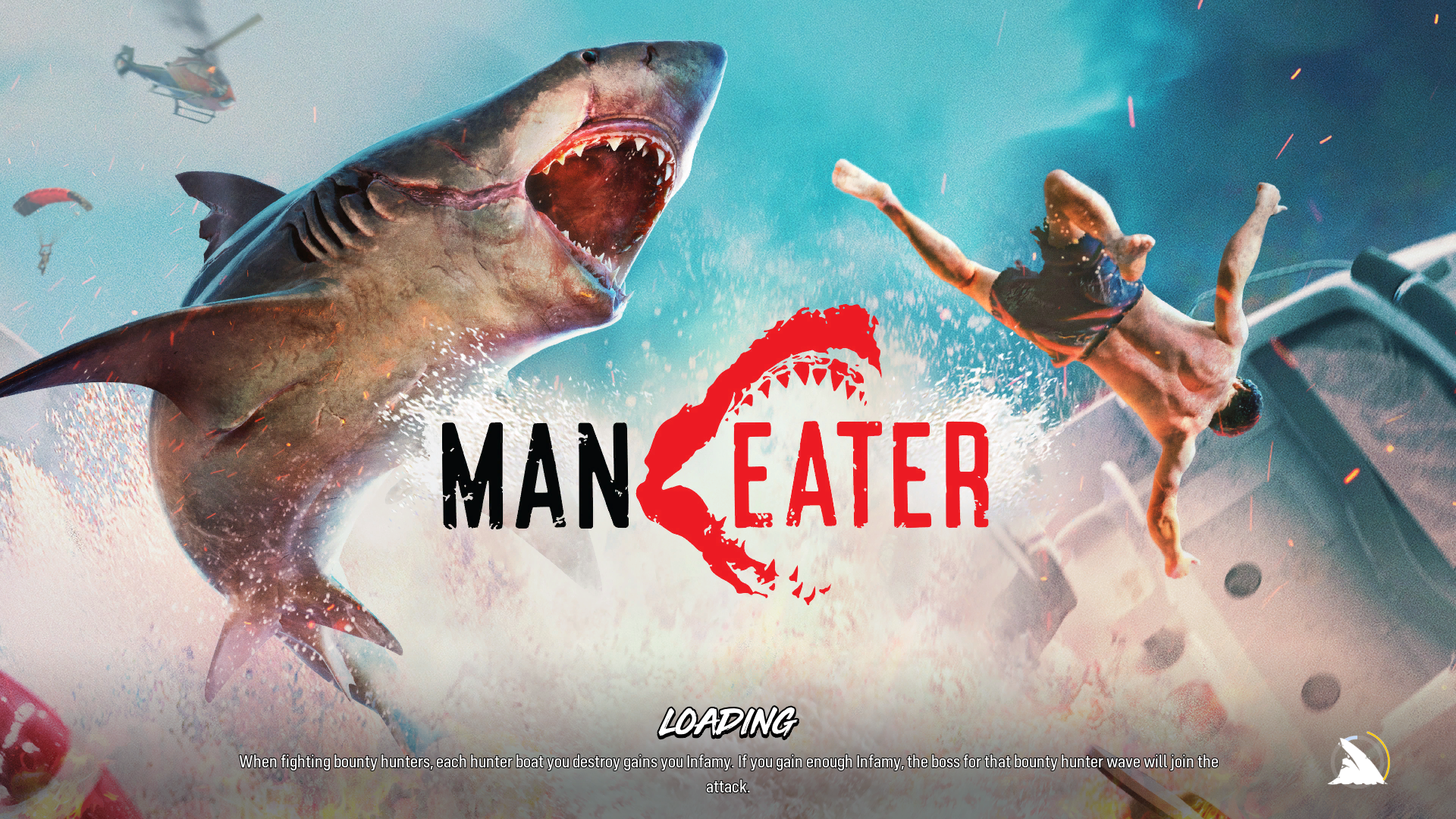 It is going to be completely impossible to review this game without making at least one reference to Jaws, so I might as well do it in the intro and get it out of the way:

There is a creature alive today which has survived millions of years of evolution, without change, without passion, without logic. It lives to kill. A mindless eating machine, it will attack and devour anything. And you get to play as it in a computer game.

Developed by Tripwire interactive and published by Deep Silver for PC, PlayStation 4 and Xbox One, Maneater is an usual but brilliant concept: An open world action game set in the water, with a shark as the main character.

The game is presented in the style of a Discovery Channel-type reality show about shark hunters in Louisiana (named, like the game, Maneater) and puts you in the sharkskin of a female shark that is seeking revenge for the murder of your mum and generally just being an apex predator because why the hell not?

Viewed from a third-person perspective, you guide the shark throughout the swamps, canals, waterways, rivers and ocean in and around the fictional town of Port Clovis, discovering more of the region and advancing the secondary story, which is local Cajun fisherman Scaly Pete’s Moby Dick-like obsession with catching your shark.

The chef’s kiss to all this – the Japanese Mayonnaise on the sushi, the prawns on the steak, the capers on the smoked salmon – is Chris Parnell’s voiceover work as the narrator. He absolutely nails it, providing a wonderfully detached but offbeat commentary to the events on-screen.

In fact, it’s up there with Glen McReady’s performance as the narrator in Strange Brigade as one of the best narrations to a video game I’ve ever encountered; it really elevates the game from “very good” to “outstanding”.

As you swim throughout the fictional city of Port Clovis and eat things and destroy boats, you’ll gain nutrients which can be used to evolve – you start off as a baby shark (doo doo doo doo doo doo), and by the end of it you’re a mega shark straight out of a movie. You can upgrade different parts of your body (such as with a bioelectric bite, and a bony tail), further adjusting your attack options too.

The environments are really good too – you could very easily spend hours just swimming around taking the underwater world in. There’s everything from underwater sculptures to sunken ships to oil pipelines and see and swim around, and it’s surprisingly pleasant to do. You even get a shark grotto in each region which acts as a respawn point, save point, and place to evolve your shark

There’s also local attractions to find too throughout the game’s world, if you’re so inclined – everything from a giant bath plug to military dumping grounds to an underwater museum – along with some humorous insights from the narrator about the attraction.

You can also leave the water and flop about on land for a short time as well, letting you reach some otherwise hard to reach areas or eat people silly enough to be on the beach, at a rave next to a canal, or even on a boardwalk 20m above the water.

Once you attack enough people, your notoriety rises and shark hunters will show up trying to kill you, which is where bulk of the boat-crunching and destruction occurs, and things get pretty spectacular when you start leaping over boats and snatching people off the deck, and seeing the boats and water turn red.

Maneater does a brilliant job of swimming the fine line of knowing just the right amount of ridiculous to lean into. The narration starts off exactly like you’d expect from a wildlife documentary and by the end of the game involves (in exactly the same matter-of-fact style) everything from local council corruption to Rick and Morty references to connections to the Cthulhu Mythos, and it all fits perfectly.

Even better, Maneater knows not to pad itself out either – the game is about 12 hours long (assuming you just follow the main story), which is just the right length. There is, of course, an afterparty mode that lets you return to the waterways of Port Clovis and explore, or engage in the Selachimorphic equivalent of a Saints Row or Grand Theft Auto carnage and destruction spree at your leisure.

The missions would, under normal circumstances, be repetitive but in this context they’re not time consuming or frustrating and work well, so eating 10 of a specific fish or fighting a hammerhead shark or sinking a fishing boat in each different region didn’t make me want to take my rod and tackle and go home.

Despite the humorous nature of the game, Maneater still manages to make some very good points about the damage being inflicted on the marine environment by humans, too.

The fact a game that lets you chow down on a turtle, leap out of the water, smash a boat in half, then use your tail like a tennis racquet to send some hapless swimmer flying across a lagoon can also still make you think “Is our relentless pursuit of profit above all else worth the environmental damage? We know so little of the ocean, what untold ecological havoc are we wreaking as we pump effluent and dump our rubbish into the homes of our planet’s marine life?” really is quite remarkable – doubly so because it never comes across as preachy about it, either.

The only major issue I have with the game is that the people you attack aren’t very bright – they don’t attempt to run away or escape, so having a bunch of people just swimming there or standing on the beach or running around in circles saying “Oh noes, a killer shark!” as you gnash and thrash about and turn them into Shark Noms™ does detract from the experience a tad.

Obviously the game’s core subject matter (being a maneating shark) is not for kids, or people who are afraid of sharks to begin with, but if you can look at it from the perspective of playing the villain in a slightly quirky monster movie, you’re going to have a lot of fun with Maneater.

Make sure you hunt this one down, reel it in, and add it to your digital aquarium – it’s well worth the fishing trip.