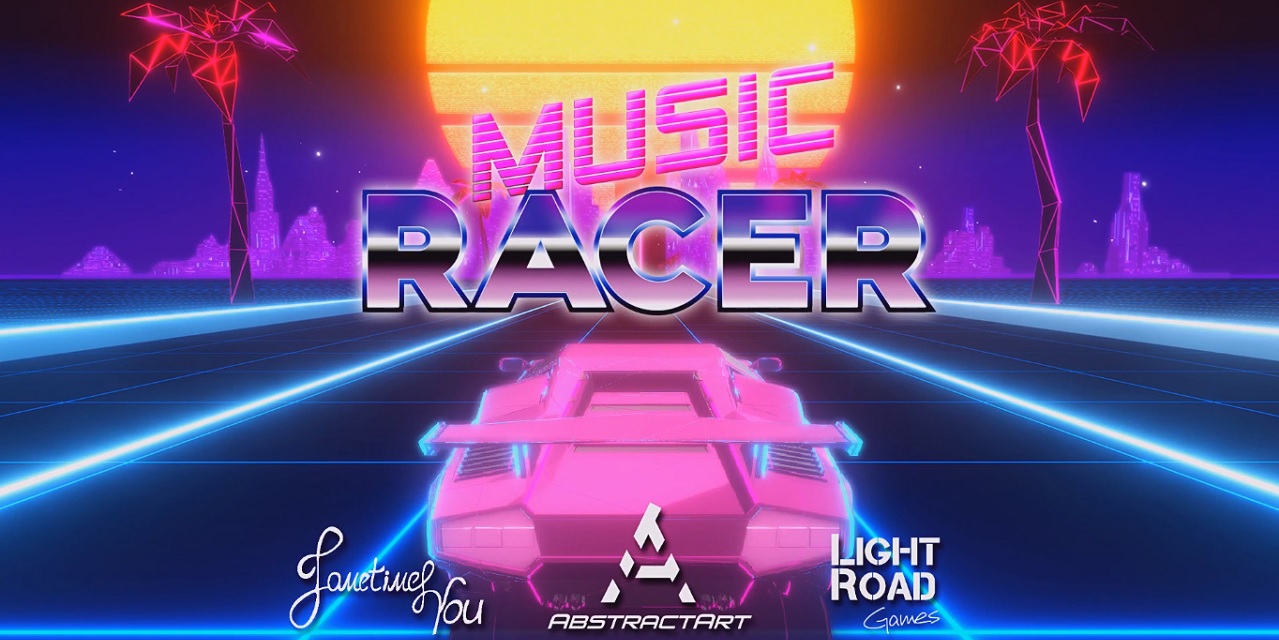 Music Racer is a rhythm arcade game developed by AbstractArt and Light Road Games, and published by Sometimes You. The game first released on Steam on July 21, 2018, on android devices on January 9, 2020 and most recently on Nintendo Switch, PlayStation and Xbox One on January 29, 2020. I have been playing with the Xbox One version and whilst Music Racer is fun to play with great song selections and fantastic visuals, it was frustrating in parts and the novelty wore off quickly. The gameplay is very simple with plenty of music but not much real racing.

You first select the car that you wish to drive, which can be customised with body and rim colours, and select the world you want to drive in. You next choose the difficulty and a song, then you’re placed onto the track. From here, the car automatically moves forward and all you need to do is press left or right to change lanes so that you run over white icons that come towards the screen. I started using the left stick to change lanes but I kept getting pulled back a lane as the stick snapped back to the neutral positon. Using the d-pad is therefore highly recommended on the Xbox controller. The white icons are timed with the beats and rhythm of the song, speeding up or slowing down depending on the tempo. Each icon you run over gives you 2 points and you are scored by the total number of notes hit as well as your biggest combo points.

The points you earn after completing each track are used to unlock additional track worlds and vehicles. There are a total of 14 tracks and 25 vehicles with the ability to customise their colours, though it was slow going to earn enough points. I sometimes couldn’t see the white note until they were too close for me to react, and this was sometimes due to the sheer amount of visual graphics thrown at me. Whether it be fireworks or neon glows, which looked fantastic, the white colours often blended too well with the notes and I missed them. I also found it extremely hard to hit notes if I was on a turn or going up a crest. It was difficult for me to know where I needed to go, and only by playing the same song on the same track over and over was I able to earn higher scores. I tried different songs on different tracks but I had the same issues. It wasn’t until I unlocked the ‘Retro’ track world that I was finally able to get some decent scores. It seemed there are far less hills in this Retro track and the track itself was translucent so I could see what was coming over hills. If the other tracks had that then I would have enjoyed them a lot more, but some could say that would be too easy.

There are four different game modes to pick from: Normal, Zen, Cinematic and Hard. In normal mode, you will see some tall red or blue barriers that will reset your combo points if you hit them. Zen mode is the same as normal, minus the barriers, so you can just chill to the tune and not have to worry about avoiding barriers. Hard mode adds more pillars but if you hit them,it’s game over. Cinematic mode I found least enjoyable as it just shows the car driving down the track and you can change the camera angle but that’s it. Fine if you just want to listen to the song and watch the visuals, but I want to play a game and get better at it.

In other rhythm games like Guitar Hero or Beats of Fury, if you fail to collect enough notes, you are gonged out and lose that attempt. I didn’t seem to see a failure option with this game, nor is there any form of leaderboard, even to measure your own progress. On one hand this is alright because I would have got frustrated if I was continually gonged out due to the crests and turns issue I encountered. On the other hand, it makes the game almost too easy because there’s no penalty in not getting a good enough score and no way to measure how I went against my previous attempts. Sure, it would mean it would take me longer to earn enough points to unlock new vehicles or tracks, but I was also not really incentivised to do so.

I did eventually unlock all track worlds and I enjoyed the ‘Retro’ and ‘Retro 2’ variants the most. I started unlocking vehicles such as the Delorean, a tron-style bike and an eagle, but again I wasn’t really incentivised to play more to unlock the remaining vehicles. You do earn a hefty number of Xbox gamer points with each unlock, so if increasing your gamer points is a goal then this is a good game to rack up a decent amount of points. Without any leaderboards or recording of your own performance, there’s no incentive to keep playing the game.

Interestingly, the Steam and Android versions of Music Racer allow you to add your own music tracks to the game. This would have been a much better offering and it’s strange that the console versions don’t have this ability. For the longevity of the game, I hope this feature is added to console versions in the future. For now, Music Racer is a fun game for the first couple of hours but the novelty wears off quickly without a measure of your own performance or global leaderboards.

Music Racer is available now on Steam, Android, Nintendo Switch, PlayStation 4 and Xbox One. This review utilised a game key provided by the publisher on Xbox One.