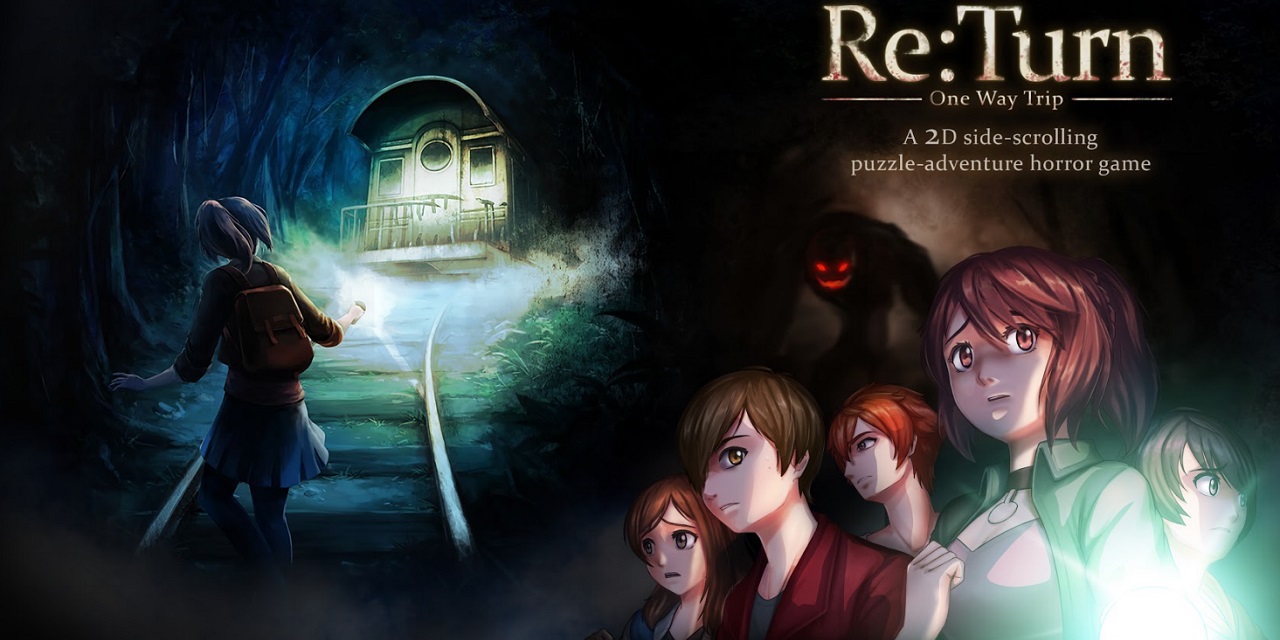 Re:Turn – One Way Trip is a 2D side scrolling puzzle horror game by Red Ego Games and published by Green Man Gaming. It released on October 14, 2020 on Steam and Xbox One, with PlayStation and Switch versions coming soon. The premise starts with five friends, Saki, Kenae, Yuuta, Kazuki and Sen, on a camping trip, sitting around a fire. After a spooky story of a missing girl, the flames of the fire roar intensely and then go out. The friends look for firewood with the two girls going left and three boys going right. The lighting effects of the flashlight and creepy owls in the foreground set an eerie tone to the game.

You take control of Saki and the game plays like a point-and-click adventure, but you can only use keyboard controls or a gamepad, side-scrolling the action left or right. Items you can interact with have a magnifying glass popup above them and any collectable items can be inspected and used from your inventory. The girls manage to find the firewood and restoke the fire however a fight ensues over a mysterious love letter that was found. The boys end up running off into the darkness, so the girls retire for the evening. Saki wakes in the middle of the night to find all her friends have disappeared. After a short time searching, with eerie music that cleverly builds tension and the occasional child giggle off in the distance, she comes across an old, dilapidated train.

With her steps on the metallic floor and the creek of the door as she enters, the game’s sound really helps to set the tone and the jump scares work effectively early on. With my heaphones on, the knocking I heard sounded like it was my study door behind me which was a great effect. However, these jump scares become not-so-scary later through the game. After this first sequence, you are almost expecting bad things to keep happening, you just do not know when they’ll appear. Clearly though, a sinister darkness is following Saki’s every move as she searches the train carriages for her friends.

From here starts the overall gameplay loop of Re:Turn – One Way Trip. There are five sections of the train and there will be one or a couple of items that can be interacted with, as well as locked cabinets and locked or broken doors to rooms. Some rooms can be entered, such as the toilet/bathrooms and some cabin rooms, while others you can either peek through the keyhole or can’t be interacted with. As you start to collect items, the general principles of point-and-click adventures comes into play. If you’ve run out of all the obvious things to do or interact with, start using the inventory items on anything that can be interacted with. You can only save the game when you see a telephone, so I was sure to come back to those spots often. There was only one time when the game bugged out and I couldn’t move or use any keypresses, but otherwise the game ran well.

Sometimes you’ll need to read a note or look at a picture to solve a puzzle, but most of them are logical and easy to solve. I did get stuck a few times, and there is a lot of walking back and forth amongst the train carriages which almost lost my interest. Thankfully though the game is broken into chapters, so it gave me a chance to stop and resume playing the next night. After a short while in the game, Saki hears a strange noise and feints. When she awakes, she has seemingly gone back in time as the train interior is immaculate and there are guests and train staff you can talk with.

The story of Re:Turn – One Way Trip switches to and from this alternate timeline where Saki manages to find her friends, but it’s not quite what it seems, with twists and turns and scary moments throughout. Some of the spooks are predictable while others were genuinely creepy and made me jump. Whilst the timeline changes and it goes from a shiny new train to the dilapidated state, but after a while it’s the same five scenes with puzzles revealing themselves as you go in places you’ve already been. I feel if the train was a collection of carriages where you felt yourself moving ‘forward’ into different carriages, I think this would have made each chapter feel much more engaging and different from the last.

Overall, Re:Turn – One Way Trip is a great 2D side scrolling adventure with excellent tension-building music and a well-written spooky story that drives you forward. There are times where the back and forth to solve puzzles gets a bit tedious, but the story elements justify the player’s efforts. The pixel art softens the horror jump scares somewhat, so don’t be turned off if horror games aren’t your thing as this game is worth a play through.

This review utilised a Steam key provided by Renaissance PR. Re:Turn – One Way Trip is available now on Steam and Xbox, and is coming soon to PlayStation and Nintendo Switch.