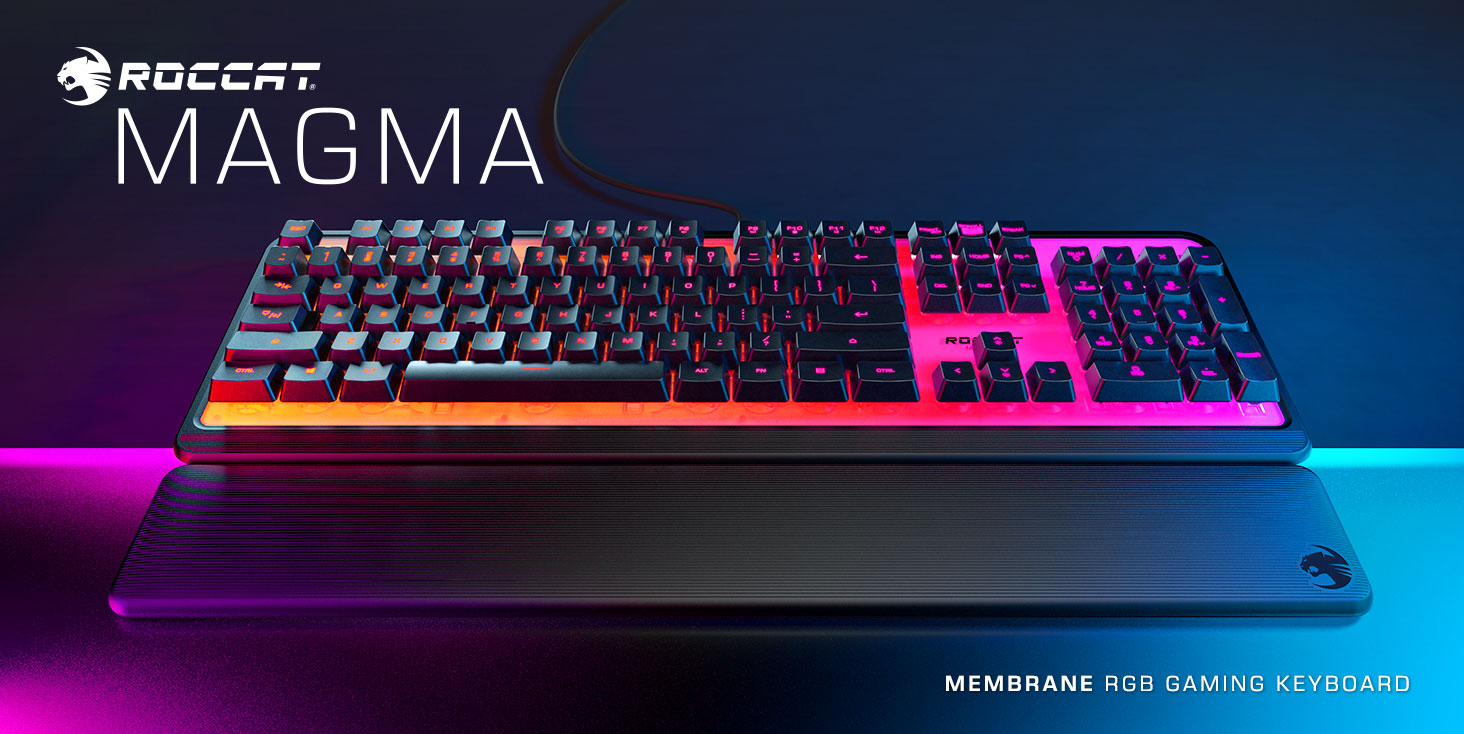 Magma, it’s what lava is known as before reaching the earth’s surface. Trapped below, this mostly liquid molten rock shines a bright, aesthetically pleasing glow behind cracked molten rock. The same can be described of the ROCCAT Magma gaming keyboard, which glows not only orange but also red, green, blue, pink, lavender, cerulean, chartreuse, etc. All while staying, and looking, very cool. But is it the keyboard for everyone?

The ROCCAT Magma is a wired Membrane Keyboard that takes the RGB factor found in most other gaming keyboards and cranks it up to 14. Instead of shining light exclusively underneath each key, the ROCCAT Magma floods the keyboards surface with illuminating colour. The result is a magma-like aesthetic that will either start you on your RGB journey or become the main character of your set-up.

But is this amount of RGB too much for a single peripheral or entire set-up? Personally I don’t think so, although I have been told otherwise. In my opinion, it might be deemed a bit extra by itself without other RGB peripherals. Otherwise, I think it pairs nicely with my RGB mouse. The ROCCAT Magma’s lighting also syncs to other AIMO products connected. There are four levels of brightness to choose from if you feel the need to decrease or increase the RGB intensity.

As a newcomer to ROCCAT peripherals, it wasn’t until late in my review that I was aware that the Magma could be customizable through ROCCAT’s own driver software, Swarm. This tool isn’t necessarily advertised for those unfamiliar with ROCCAT, unless you didn’t skim past its mention in the System Requirements section of the manual.

With ROCCAT Swarm, you’re able to change how lighting behaves, change colours, create secondary button functions and even change the sound of keystrokes. The latter being the complete opposite of what this keyboard was meant to be about, as well as slightly tacky given some of the options. Typing an entire sentence with the sci-fi sound option enabled was more obnoxious than soothing.

But obviously it’s not all about how the keyboard looks or sounds but how it performs. The ROCCAT Magma is your typical run-of-the-mill gaming keyboard when it comes to features. However this is where they keyboard itself becomes a bit of swing and a miss for me. 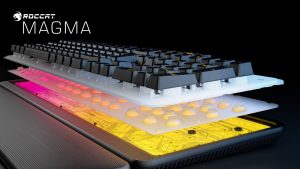 The first thing I noticed was how smooth the keys felt without feeling too slick. But once I started typing, I started having 90’s flashbacks. For over 10 years, I’ve been using portable keyboards, laptops and mechanical gaming keyboards. All of which I’m a fan of and have become quite accustomed to, particularly as their buttons are shorter in height. The Magma however feels and sounds a lot different as it’s a Membrane keyboard, which were mostly used in the 90’s.

While it’s been a good keyboard when gaming, I can’t say that I’m a fan when it comes to using it for typing. However the included  plastic hand rest has made typing more comfortable than resting my hands on my desk. Though it probably has more to do with my hands being elevated rather than what it’s made of.

But typing overall doesn’t feel as fluid and that once again comes down to what I’ve become used to over time. I like shorter, flatter designed keys. These feel more like a keyboard from the days of DOS. They’ve also designed the ROCCAT Magma to have more space between the keys and the surface itself. Meaning that it feels as if I’m really pressing down with each key stroke.

There’s also an unexpected absence of the Caps Lock function for the model I reviewed. Which seems to be due to the Easy-Shift functionality which allows you to assign secondary functions to keys. Something which I never found much use for.

Other features include the on-board media controls and another I’ve never seen before called Game Mode. Enabling Game Mode disables the ability to open the Windows Start menu if said button is accidentally pressed. I’m a fan of this feature as my fingers tend to go wandering mid-game.

Just from my overall impressions, the ROCCAT Magma Membrane Keyboard is worth the $99.95 price tag. But I’d recommend it more if it’s for a set-up solely for gaming. If you’re after a new keyboard but also work from home, I’d probably look elsewhere. Visually it’s aesthetically pleasing but I’d recommend at least one other RGB peripheral so it doesn’t look too loud. 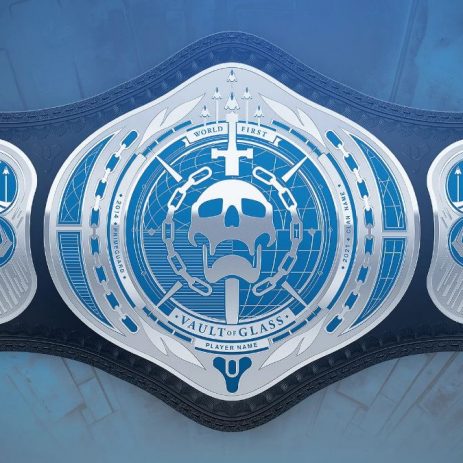 Vault of Glass Is Coming To Destiny 2