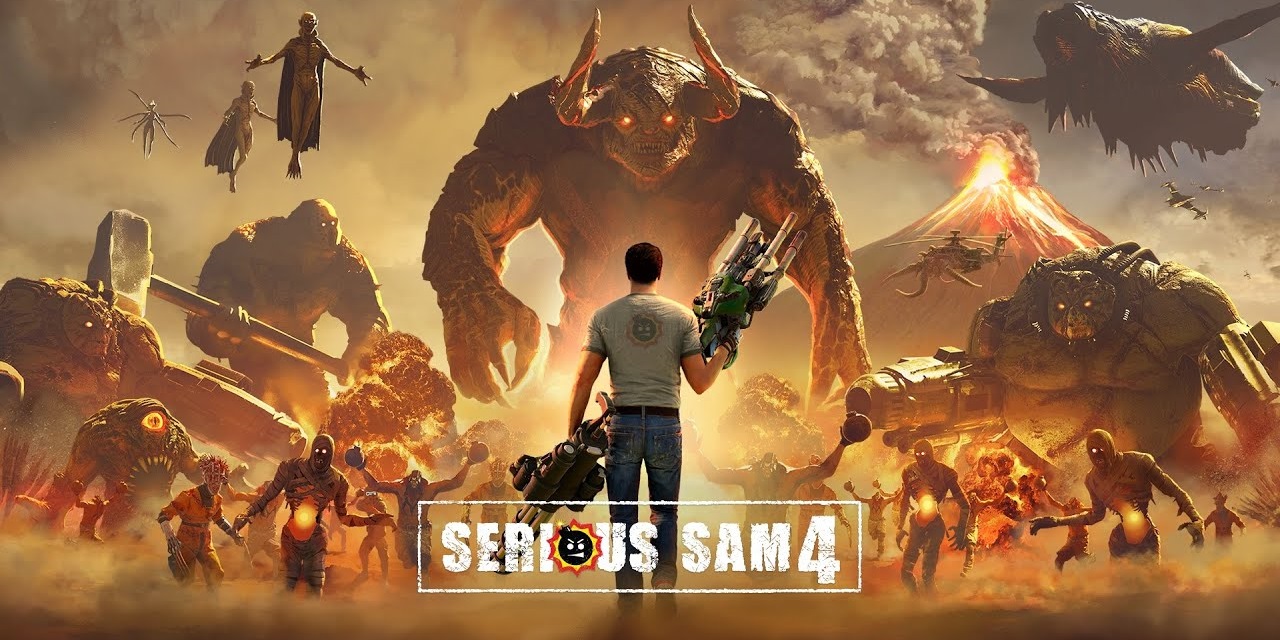 We had a great time playing Serious Sam 4 co-op slaying hordes of monsters with lots of laughs at the hilarious and perfectly-timed one-liners.

Serious Sam 4 is a high-intensity FPS developed by Croteam and published by Devolver Digital, and released on Steam, GOG and Stadia on September 23, 2020. It is planned for release on PlayStation and Xbox in 2021 due to an exclusivity deal with Stadia. As such, Australian gamers are limited to playing it on Steam. This is a shame for console players and the game is a heck of a lot of insane fun, especially playing 4-player co-op with mates.

Serious Sam 4 is actually the 5th entry into the main series of the Serious Sam universe. There have been numerous spin-offs over the years, but the very first game was Serious Sam: The First Encounter released way back in March 2001. While I played it a bit at LAN parties, I was playing way too much Counter-Strike back then to stick to the series. Serious Sam: The Second Encounter followed in 2002 before Serious Sam 2 came out in 2005. Serious Sam 3: BFE was released in 2011 and so it has been nine years since Sam “Serious” Stone and the Earth Defense Force were up against Mental, an extraterrestrial overloard who attempts to destroy humanity again and again.

As soon as we saw Serious Sam in-game and heard his voice, I was glad that the original voice actor John J Dick was back again. The voice and the character’s look is very reminiscent of Duke Nukem, and so is the humour, puns and one-liners. The one-liners in this game are hilarious and the story builds around these, which is it’s saving grace as the Serious Sam games have never really had too rich a story. It’s more been about blowing up waves and waves of monsters, and man have Croteam upped the ante in the waves of monsters department! The environment graphics and effects are top notch, particularly for the size of some of these maps. The level with Mt Vesuvius exploding with lava in the background was impressive.

The developers came into this game with the attitude of “if it works, don’t fix it”, so if you’ve played a Serious Sam game before, you’ll know what to expect. Serious Sam 4 is still the chaotic arcade-style shooter where you’ll be constantly strafe-shooting and backpedaling fighting insane numbers of monsters, while finding the right tool for the job. There are 15 different weapons to find in the game with the auto shotgun and minigun being highlights, and 8 different gadgets to alter your playstyle such as grenades, mini-nukes and black hole portals. Once you unlock some S.A.M perks, you can even dual wield most weapons to devastation effect.

Monsters from previous Serious Sam games are back, such as the hilarious at first Headless Kamikaze, who’s ‘AARRGGHHHHHH’ got a bit tiring after a few hours, Beheaded Rocketeer, Kleer, Scrapjack and Werebulls. Brand new enemies include the frantic Processed, repulsive Belcher and the hard-hitting Zealot. Some of these functioned like the usual monsters you get in these co-op games like Left 4 Dead, but they still look awesome in this latest instalement.

Whilst playing co-op, we did find that if one or a couple of players split up and do different sections of the map, such as a side quest area while the rest do the main quest, when the hordes of monsters spawned in, they often just started running at one or two of us who may have been hundreds of metres away. On one hand this made for some easy kills as they were running away from some of us. On the other hand, it got quite annoying if a headless kamikaze was yelling and running at one of us but got stuck on a low wall or some other obstacle, his scream would just be constant until we found him and killed it.

“This is one of the systems we actually developed for Serious Sam 4. We have some levels that we’ll actually be able to populate with this many enemies. We were really pleasantly surprised with how fast it can run, because originally we were hoping for like 10,000 enemies, and now we’ve hit an order of magnitude more.”

There is a lot of attention to detail in this game. Within the game’s menu is an information hub called Netricsa which is like an encyclopedia with additional background and lore on all missions, NPCs, main character bios, enemy, weapon and gadget information as you discover them. By pressing C in-game, this will show a waypoint hint to make it easier for you to find objectives, particular for finding side quests and was very useful on some of the hugely expansive maps.

I played the game exclusively in a co-op team of 3 mates and we had an absolute ball slaying hordes of enemies and cracking up laughing at the well-timed one-liners. We all did note though that had we played this single player, we probably wouldn’t have played as much as we all did. When I did try single player, I died a hell of a lot more due to the sheer number of monsters overwhelming me. There were times where all three of us couldn’t keep up the slaying. There is a decent story throughout the game that’s easy to follow. However the character models looked dated comparing to other current games, and there were times some of us got stuck in the ground or in a door. Thankfully we could suicide and respawn without losing progress, but these small issues soured our experience a little. Loading into each level chugged the game too, however I imagine that would perhaps be the legion system loading in all the monster assets for that level.

If you’ve played any of the Serious Sam games, you’ll likely remember they never were outstanding in the graphics department, mainly due to having so many monsters to fight on screen at once. Whilst some of the character animations weren’t the best, some of the level environments were amazing. Some of the fights we had against thousands of enemies were crazy and exhilarating, especially with us shouting to each other over voice comms. It was impressive how the game handled the sheer volume of monsters on scree at once and still delivered a smooth gameplay experience. Once we finished the campaign playing co-op, we all felt no need to return to the game unless there’s more content added. We had a great time playing Serious Sam 4 co-op slaying hordes of monsters with lots of laughs at the hilarious and perfectly-timed one-liners.

This review utilised a Steam key provided by Power Up PR. Serious Sam 4 is available now on Steam, GOG and Stadia (not available in Australia).