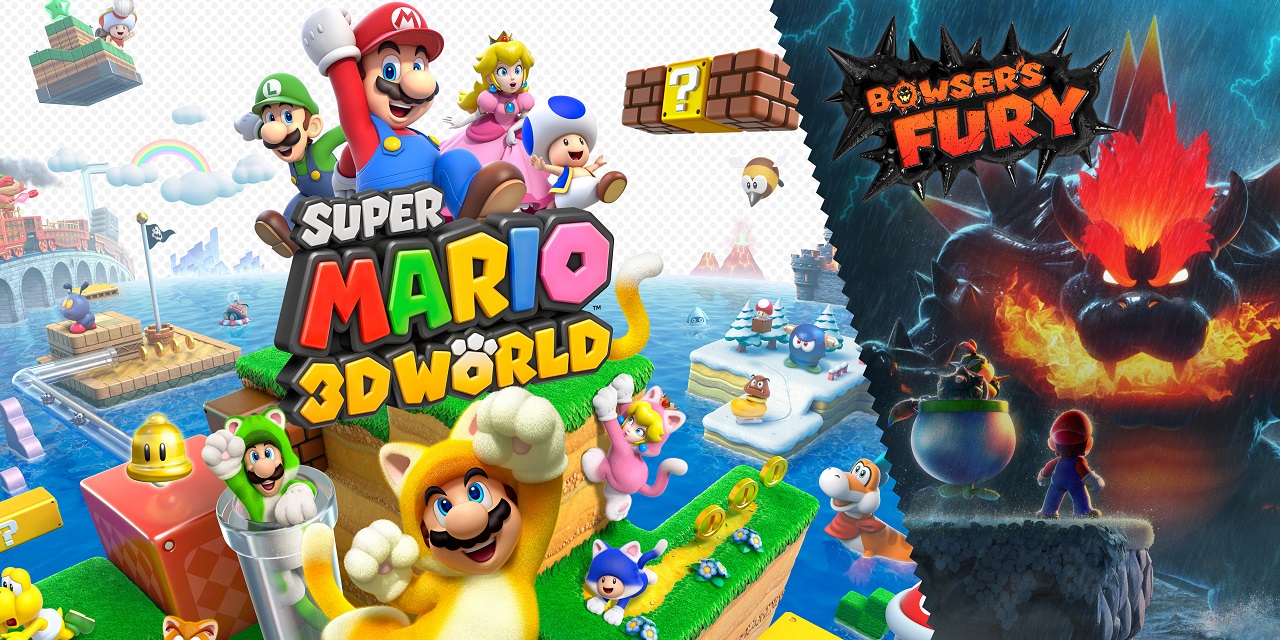 It’s been four years since the Wii U was discontinued and I still regret never buying the console. I honestly couldn’t tell you why I never bought one. Maybe it was because I was happy with the consoles I had at the time. Or maybe I wasn’t sold on the library of games as a whole, thinking it didn’t hold as much value. To be honest, my Wii library consisted of no more than half a dozen games which was no help in convincing me to purchase one. Unfortunately, it wasn’t until later on that I discovered all of the hidden treasures the Wii U had. Luckily the Nintendo Switch has gained many titles from the last-gen console. And unlike some people, I’m not even mad about it.

There was one game in particular though that came out on the Wii U that grabbed my attention. Obviously not well enough considering the circumstances. Super Mario 3D World was a new spin on the Mario games fitting somewhere in between its original core 2D gameplay and the newer 3D open-worlds ala Super Mario 64, etc.

It was also the follow up to the 2011 Nintendo 3DS title, Super Mario 3D Land. This one I did actually own and I was a major fan of. Hence the reason I was so eager to play 3D World. Eight years later and my prayers have finally been answered with the re-release of Super Mario 3D World on Nintendo Switch. And after such a positive and enjoyable experience with 3D Land, I knew what to expect from 3D World. Just on a much larger scale.

Super Mario 3D World’s story is, as per usual, is simple and to the point. Mario and friends teleport to another world via a magic pipe. Peach doesn’t get kidnapped, but seven fairies called the Sprixie Princesses get bottled up and taken away by Bowser. This becomes a search and rescue by the gang.

Unlike 3D Land, Super Mario 3D World doesn’t revolve around the gimmick of special 3D vision technology. Which in a lot of  ways I’m glad it never transitioned to the Wii U. The early 2010’s was a weird time where a lot of mediums used 3D technology to immerse audiences. It definitely worked for 3D Land in alot of ways. There were certain components of gameplay that used the technology well. But it‘s not required by any means. Nor is the sole reason why Super Mario 3D Land was good. 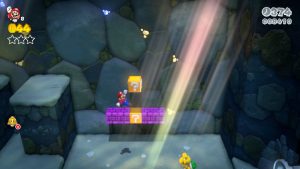 Super Mario 3D World is what the Super Mario franchise would have been if Nintendo stuck with the original format going into the 64 era. That’s not to say one game is better than the other though. Although Super Mario 64 was very unique at the time, both styles of gameplay are iconic. What makes Super Mario 3D World unique, as well as Super Mario 3D Land, is how it presents linear platformer style levels as large three-dimensional spaces.

Imagine the level design of the original and New Super Mario Bros. games but spread out in all directions. Many of the levels in Super Mario 3D World feel very familiar, using the same level objects, obstacles and mechanics we’ve all grown to love. They’ve also introduced some new and imaginative level design. For example, the introduction of the new cat power-up means Mario and co. can climb and explore areas of levels that can’t be seen at eye level. Another example is in one particular level there’s a mechanic that uses shadows to help navigate. There was even a level with a topdown view which gave me plenty of classic Zelda vibes. A lot of thought has gone into the level design making exploration a lot of fun.

And like many Mario games before it, there’s definitely no shortage of secrets. Which are half the fun of playing through the levels, particularly to collect all of the green stars. They’ve even integrated secrets into the level selection maps. These areas are much more interactive than previous Mario games and I suggest you take your time to explore every corner. You’ll also find a few now famous Captain Toad levels spread through out. These make very good use of the 3D environment as you use every single camera angle to navigate.

While you’re free to explore worlds as they unlock, levels are still semi-linear with some also requiring a certain amount of green stars to unlock. This makes the hunt for all of the green stars that much more important. But for the most part, it’s not hard to obtain the amount required. The only time I ever came super close to not having enough was for the very last level. As long as you’ve got an eagle eye and are clearing every secret/non-secret level, you should be golden. 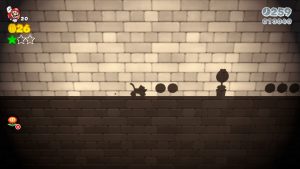 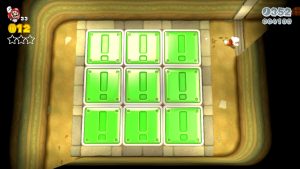 While my solo run was very enjoyable, the real fun comes with multiplayer. And it’s as every bit chaotic as you’d expect if you’re familiar with the New Super Mario Bros. games. I only played with one other person but I can only imagine what it would be like with four players. But I also don’t want to imagine what the outcomes would be. There were so many occasions where I’d be killed, or even thrown off the edge, due to my friends actions. I’d also like to think that it was sometimes accidental.

Things also get pretty competitive as the player with the highest score in each level gets crowned #1. If you thought Monopoly was dangerous to mix with friendships, you haven’t a clue what to expect when playing this game. But in saying that, it’s also what makes Super Mario 3D World a really fun social game. I’ve found that the newer Super Mario Bros. games have been the best party games within my circle of friends and this one has definitely been added to the list.

One particular mechanic that I found wasn’t translated smoothly over to the Switch version was using the touch made to control platforms. During my solo run, I played this exclusively in handheld mode. Obviously, this wasn’t as big of a problem since the screen can also be touch controlled. The difficulty came while the Switch was docked and I only noticed this problem while playing with a friend.

Instead of being able to use a touchscreen, we had to use our controllers instead to move our cursors around the screen. My friend nominated themself to be the cursor controller but I couldn’t imagine trying to do this on my own. Especially when you only have a limited amount of time before the platforms move back. Personally it felt a little too chaotic trying to use the motion controller to click on platforms while navigating my character.

The re-release of Super Mario 3D World on Switch also introduced a new expansion/stand-alone game call Bowser’s Fury. Once again, Mario gets teleported to another world via a giant puddle of muck. Here he unexpectedly forms an aliance with Bowser Jr. who informs Mario that Bowser is alot more bigger, angrier and scarier than he normally is. Bowser Jr. is also by your side on this adventure and will as little or as much as you like. A second player can also take control of Bowser Jr.

I came into Bowser’s Fury expecting gameplay to be the same as Super Mario 3D World. However I was pleasantly surprised to find that this was much more like Super Mario 64. Spread across the open-world environment are mini areas that act as levels. Similiar to Super Mario 64, each area contains 5 Cat Suns to collect by doing different objectives within the same area. As you can see, the cat theme has been brought over from 3D World too. Collecting Cat Suns will allow you to eventually face off with Bowser across multiple fights, as you would collecting Stars in Super Mario 64. 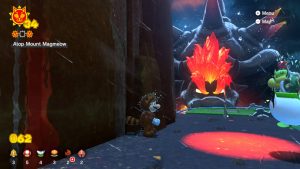 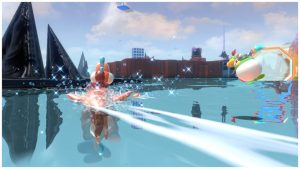 Bowser’s Fury isn’t exactly a large game but it’s well worth checking out. The combat between yourself and Bowser is also very different to what we’re used to in other Mario games. Because it’s literally a combat fight. Mario transforms into a super-sized Cat power-up and claws the crap out of Bowser between the big angry dragons various attacks. Without spoiling anything, things get even more chaotic towards the end. It definitely didn’t meet my early expectation of being an easy fight against Bowser. However the overall experience is a memorable one.

Super Mario 3D World may be yet another Wii U game ported over to the Switch but it’s well worth checking out if you haven’t already. Especially if you’re a fan of playing Mario games with frends. Plus the addition of the new Bowser’s Fury is also another worthy title to add to your Mario collection. I also hope we get more Mario games like these in the future. A larger version of Bowser’s Fury would be a lot of fun to play through. 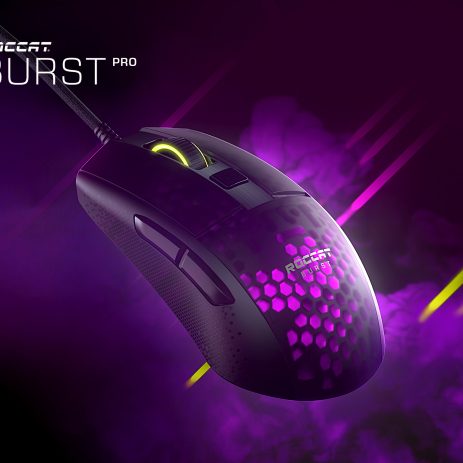