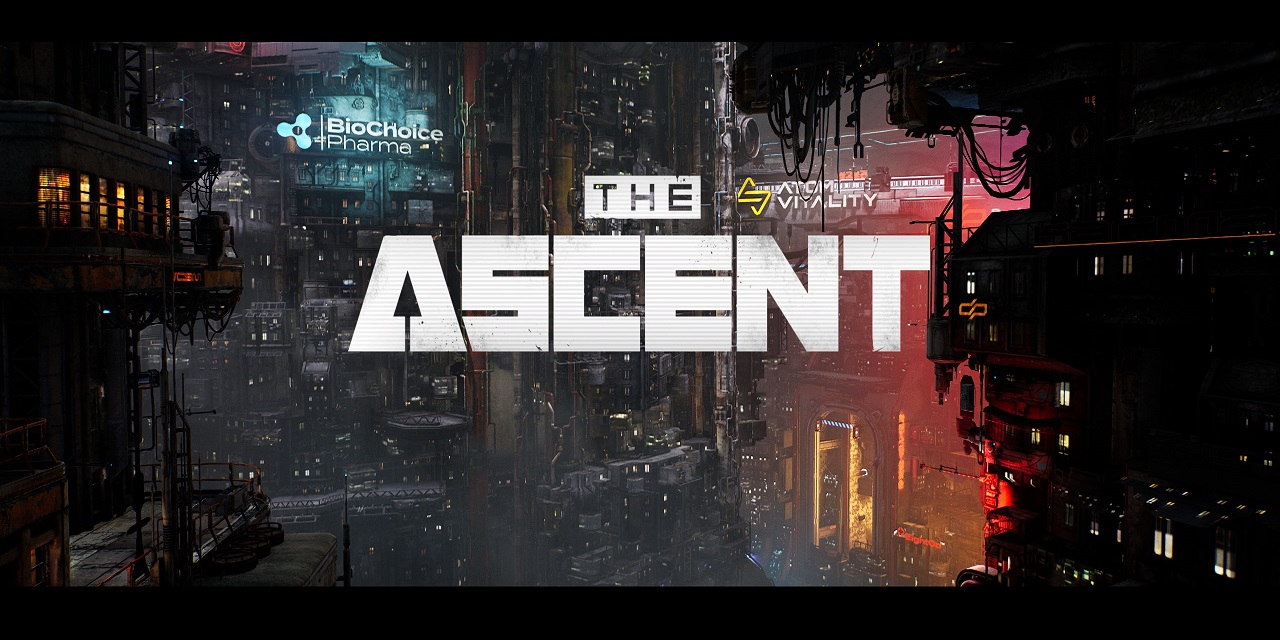 The Ascent is a cyberpunk action twin-stick shooter with RPG elements developed by Neon Giant and published by Curve Digital for PC via Steam and Windows 10, and Xbox consoles. I have tried the game on Steam as well as Xbox, and co-op with a mate, and it’s comparable to a cyberpunk Diablo-style aRPG with guns. It released on July 30, 2021, for us here in Australia and it’s one of the best games I’ve played this year so far. Not only is the gameplay and story fantastic, but it’s been a smooth launch on Steam with very little problems encountered.

We play in the Ascent Group arcology, a corporate-run metropolis stretching high into the sky of Veles and filled with creatures from all over the galaxy. Playing as a worker, we’re enslaved by the Ascent Group that owns us and everyone else in the district. One day, you are suddenly caught in a vortex of catastrophic events: The Ascent Group shuts down for unknown reasons and the survival of your district is threatened. You must take up arms and embark on a new mission to find out what started it all.

The world of Veles feels lived in and alive, and I feel there’s an overarching story going on all around us, of which we are playing a small cog in the wheel with our own primary and secondary quest lines. There is so much incredible detail in the environments, in particular the verticality of the backdrops given the isometric view. I found myself stopping so much to admire the backgrounds and to listen to conversations around me as I walked down the bustling streets and filthy sewers, especially in Cluster 13 and The Node. It all feels very cyberpunk and blade runner-esque, and the characters you meet are rough, foreboding and superbly voice acted. There’s even chests to loot littered in between shopping stalls and cupboards to check inside shops, so there’s plenty of reward for your time to explore every corner of each zone. It’s a credit to the 12-person team at Neon Giant for creating such an incredibly good-looking world for us to play in.

They also weren’t afraid of using foul and lewd language. There’s a quest called Balls Deep where you need to travel to the Deep Stink to kill ferals and collect their testicles. It made me laugh just getting the quest, and then going around shooting ferals for their balls just had me grinning the whole time. I found myself singing “Chocolate Salty Balls” from South Park while collecting the testicles and then handing them in for the quest reward. There are many side missions like this that are entirely optional but add such a great atmosphere and light-heartedness to the otherwise edgy and dire undertones of the overall story. Of course, there are some hardcore story side quests as well that invest you in the setting. It made me care about the npc robots repairing broken pipes and trying my best not to shoot them when enemies appeared.

You will come across a vast array of advanced weapons and armour in The Ascent that you can swap out on the fly. The weapons look and sound amazing, particularly the dread assault rifle, HMG42 dominator and the riot gun. There are also some guns that will dismember enemies. You’ll collect parts through the world that you can use to upgrade your weapons back in town and if you happen to discard a particular weapon that you’ve upgraded, picking up a new one will retain your upgraded Mk level. In loot, chests and quest rewards will be augmentations, modules and cyberdecks that will enhance your gameplay to blast the enemy, unlock chests and doors, a loot drone and many other perks. You can also find new shirt designs and weapons skins from drops that, upon visiting a grafter, can change your physical appearance and clothing, like you did in the character creation screen at the start of the game.

Gunplay in The Ascent is phenomenal. Each weapon has advantages and disadvantages. The pistols are powerful but have small clips, shotguns are lethal up close but spread too far from a distance, similar with the sub machine guns. There are also energy weapons that sound so good when firing them. Another key mechanic in combat is the cover system and the ability to shoot high over cover by holding right-click. That’s not uncommon in shooters like this, but usually they are just blind inaccurate shots. This lets you aim high and hit with accuracy. Aiming high also helps when the enemy is at the top of a flight of steps. Initially I used cover a lot, but the enemy are smart and would flank you, so I tend to just run and dodge a lot which makes the combat very action oriented for me.

One little gripe I have is the minimal initial character customisation options available to us. There’s so much to see and do in this cyberpunk world, but we’re very limited in how our character looks in terms of face design and clothing. Our armour often covers up our face and bodies anyway, but when playing RPGs like this, I really like to invest in the appearance of my character to make them look as bad ass as possible. Because when I’m surrounded by bad guys, shooting my guns, dodging, taking cover and aiming high for precision shots, and that awesome edgy music is playing, I want to finish the fight and have that hero shot every time. I do like the character I’m playing; it would just be cool to have some more cosmetic options to choose from.

The mission log shows the recommended level of your main and side quests which I really appreciated. When I got to Cluster 13, the first major hub of the game, I rounded up all the side quests I could get and then looked to see which was the closest. I’m thankful I was able to read the level requirement because, despite only being level 3 myself, some of the quests were rated as level 7-13. There was a time where I was just out enjoying exploring the next zone while travelling to a quest, when I came across thugs that had a skull next to their health bar. I’m surprised I noticed the skull at all because I died in less than a second and they were clearly miles too high level for me.

When you die in The Ascent, you will reload to your last save point which is the last time you zoned in or the last checkpoint, whenever that was. In The Ascent, you cannot manually save the game or press F5 to quick save, so there’s no save scumming possible here. On the same token, when you’ve finished your play session for the day and go to log out, it will tell you the time since your last save, so that you don’t inadvertently logout and lose the last 30 minutes of gameplay. It may mean you need to play a bit more to hit a checkpoint or teleport back to town. Teleporting involves finding train stations, which are free, or pressing T to use the taxis once you unlock them, though taxis cost 1000 ucreds.

Co-op was a blast playing with a mate. We initially had some issues connecting where it said our game versions were mismatched, even though both of our Steam games were fully patched. It dawned on me that I had a review copy of the game under a review beta branch. I removed that and it downloaded another 1.5gb, then we were able to connect and play together. While it was awesome fun playing solo, it was even more so playing with a mate. What blew me away was that, even though I was playing through the hosts quests, both of our characters appeared in the story cutscenes. Even when we used the taxi to fast travel, both of us were sitting next to each other in the taxi. This was such a cool thing to see, and I couldn’t remember the last game that did this.

There were some graphical glitches when we fast travelled where my mate’s game would load, then I would teleport in but, while I could see npcs around me, the ground was transparent, and it took a few seconds for all the environment art and objects to spawn in. Apart from that, we had no other issues playing co-op and it was a heck of a lot of fun. Any loot I found, upgrades and skill points spent, cash earned, and weapons upgraded, they all came back with me into my single player campaign. I was also happy that, even though we completed many quests together, it didn’t advance any of the quests I had in my single player game.

I did try playing the game on my original Xbox One console. The same amazing level of detail is there but the load times getting into the game and things like riding the elevator that only take a couple of seconds on PC, took around a minute on the Xbox. The controls were more true to the twin-stick shooter nature but, given I was running usually running around evading the enemy mobs, it felt almost backwards to then aim my weapon back and around to shoot them. Aside from the controller difficulties (I’m a keyboard/mouse gamer at heart), The Ascent ran really well on the Xbox Series X. It is awesome that the game is available on Xbox Game Pass for both PC and Xbox, so for anyone not sure whether to invest in the game or not, I encourage you to dive in if you have game pass.

Overall, The Ascent is one of the best games I’ve played this year with amazing visuals, story and gameplay that sucks you right in from the opening scenes. Playing co-op is a heck of a lot of fun and single player is just as good with challenging gun fights and so much of the world of Veles to explore. The world definitely feels alive around you with street vendors selling their wares, robots repairing pipes in the sewers and people just going about their business. I hope Neon Giant have plans for either DLC or a sequel because I will buy the heck out of it to keep supporting them making such great games.

This review utilised a Steam key provided by Renaissance PR and The Ascent is available now on Steam, Xbox consoles and is on Xbox Game Pass. 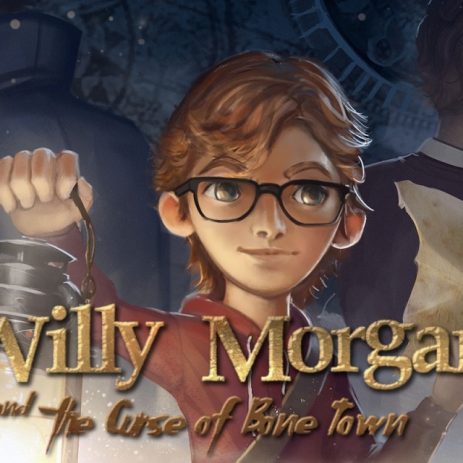 Willy Morgan and The Curse of Bone Town Review