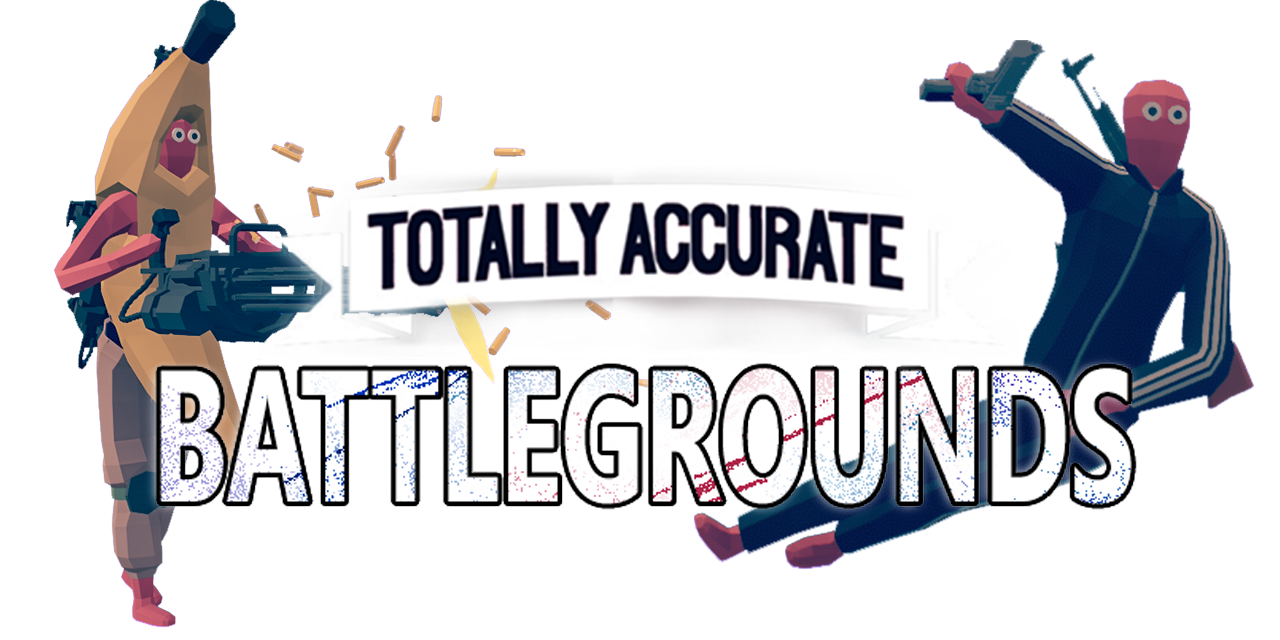 Totally Accurate Battlegrounds (or TABG for short), is marketed by small Swedish developer, Landfall, as a parody of the widely popular Battle Royale genre. Just like all Battle Royale games, you drop on to an island, or in the case of TABG you literally fire headfirst out of an invisible cannon from a floating convoy of trucks… Yeah, you definitely read that correctly.

“Instead of shooting each other, the match turned into a game of high jump with guns.”

Once you’ve completed your flying head-butt in to the ground you need to find weapons and start hunting until you’re the last man or squad standing. This might sound like every other Battle Royale game out there and it “Totally” is. But it’s doing it while taking the absolute piss out of the genre. It has a massive selection of weapons, from a Minigun to a Blunderbuss to a stun gun, there’s plenty of opportunity to reap havoc on other players. Attachments are also included and can be attached to anything and I mean anything. Ever wanted to see what an RPG would look or sound like with a suppressor attached? Ok mate just whack it on and fire away!

When it comes to using the weapons in TABG, the mechanics actually work extremely well which was a pleasant surprise. The gun sounds are solid, the bullet drop is on point and the physics of the game make for a welcome challenge when you’re in a firefight. None of the guns feel like they’re a “rail-gun” like in Fortnite, but they’re not hard to zero in on anyone like in PUBG either. If you feel like something different, press G to turn your gun sideways and fire like a gangsta! Come on, who wouldn’t want to fire a .50 BMG sniper rifle like he’s straight outta Cannington?

Movement is a bit wonky and heavy footed. That’s because all movement is ragdoll/physics based. It’s very easy to get used to and I found it pretty hilarious trying to make myself fly by jumping while firing my MG42 at the ground. A lot of other people seemed to love it too because instead of shooting each other, the match turned into a game of high jump with guns and a bunch of people giggling like little girls. Or was it just me giggling like a girl and everyone looking at me like I was an idiot?

Like its Battle Royale counterparts, there is still a “death circle” that will slowly close in on a randomly designated area on the map. However, TABG does it in quite a unique way. Instead of having a “gas” styled circle slowly closing in, you have a massive wall that slowly builds around the edge of the zone. That means you only have a short amount of time to get in the zone, or you will get locked out of the zone and die instantly. For someone like me who hates players camping the outside of the zone for easy kills this was such a welcome take on the basic mechanics of the genre.

Graphically, TABG isn’t exactly going to blow your mind. Whilst it is running on the popular Unity engine, the bloom effects can be a bit of an eye strain. The art style may be considered quite basic but the environments are actually quite nice to look at. From massive castles, to wild west towns and even the odd container yard, there’s definitely a degree of beauty to the environment of TABG.

If vehicles are your thing, there are a few in TABG but aren’t very useful for anything other than messing around. Surprisingly there is a Helicopter that is a rare/random spawn in the map. It doesn’t fly, but it does drive around like a car and glides when you drive it up a hill. A little bit like how the plane worked in GTA3.

TABG isn’t without its bugs or problems. From random FPS drops to matches not loading with all of your teammates and even the occasional cheater which sadly we are all getting used to in today’s online gaming world. It was initially an April fool’s joke from the developer, Landfall and was released for free for the first 100 hours. After those 100 hours it became a $5 game on Steam and to be honest for $5 I can deal with a couple of bugs or cheaters here or there. I have no doubt they will implement some kind of anti-cheat soon purely because of how popular the game is right now.

All in all Totally Accurate Battlegrounds is a cheap, buggy, silly looking take on the Battle Royale genre. But that doesn’t mean you shouldn’t buy it and have a hilariously fun time with your mates. Even if you only play it for a weekend, for 5 bucks it will be a struggle find anything that will give you this much entertainment. Provided you can actually get in to a match.

Totally Accurate Battlegrounds is available now on Steam for $5.