I started to write the intro to this review mentioning how I own a plethora of headsets. And since moving into my new digs, my headsets now have a new home hanging in my closet on display for no one else but me. However something sparked in my brain, telling me that I’ve already written this intro. Minus the stuff about my closet of headsets. A quick search sent me to my review about the RIG 700HS Wireless Headset and an intro that I was about to unknowingly “rehash” for this one.

It’s been over a year and a half since acquiring the RIG 700HS and it’s still, and I quote, “Another quality product from the RIG family!” When people tell me they’ve bought a RIG headset, I shamelessly preach about how great their headsets are. Which all sounds very biased as this is another RIG product review. But I’ve just really liked this brand for the better part of the last 10 years and have a lot of trust in them. 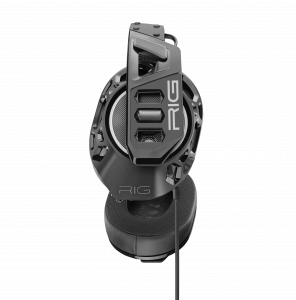 So as you could guess, I was pretty happy when we were offered pre-launch units of RIG’s latest products. One of which is the new RIG Nacon Pro Compact controller for Xbox One/Xbox Series X|S. RIG aren’t exactly making controllers, however they’re helping to change the controller market by putting Dolby Atmos for Headphones into the controller itself. It’s pretty cool and you can read more about it here.

The other product of theirs we were sent is the 2nd generation model of the RIG 500 PRO. Which is like the slightly older brother of the RIG 700. They’re almost the same, but like most siblings they’re pretty different from one another. One’s wireless, the other isn’t. One has a lightweight metal frame, the other is made of lightweight plastic. Same same but different.

We were sent the HX model designed for Xbox One/Xbox Series X|S/Windows 10, which perfectly matched with the Pro Compact controller review. But because it’s a wired headset, it can be plugged into any 3.5MM headphone jack and still work. But if you have an Xbox, you’ll definitely want the HX model for the best experience possible.

Before we talk about audio and performance, I’ll get the “out of the box” impressions out of the way. The RIG 500 PRO Gen 2 is a wired headset that’s lightweight while also feeling sturdy at the same time. Weighing in at 281g, it features a a lightweight metal frame which holds a self-adjusting cushioned head strap underneath. Teamed with comfortable dual-material cushioned earcups  and 3 sizing options, the RIG 500 PRO Gen 2 sits firmly yet comfortably on my head. However I’m yet to experience a moment of forgetting they’re there like I have with the RIG 700. But that’s not to say they become uncomfortable after too long of a wear. 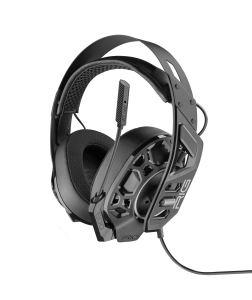 The RIG 500 PRO Gen 2 also comes with both a detachable mic and flip to mute function, which I honestly wasn’t too sure about at first. Especially since you can tuck the microphone away when not in use. Why also detach it? The switch the microphone attaches to also feels looser than expected, leading to the microphone not locking into place when tucked away.

In regards to microphone quality, it’s no better or worse than what I’ve experience with the RIG 700. A friend of mine commented that it sounded like I was in a tunnel during a party chat. I wouldn’t describe it as sounding like that, but it’s not the sharpest quality either.

Apart from the multi-functional microphone, it’s well designed headset overall. The metal frame in particular gives the RIG 500 PRO Gen 2 a much sturdier look and feel. While it doesn’t feel “barely there” after hours of use, it never become uncomfortable over time.

Marketed as a Competitive Gaming Headset, the HX model in particular comes with 2 years access to Dolby Atmos for Headphones. It’s an absolute game changer in surround sound in more ways than one, specifically for multiplayer first-person shooters.

To test this, I spent most of my review time playing the latest season of Fortnite. Being a battle royale game you obviously spend a lot of time listening out for other players in the area. But default surround sound options can only help so much. They don’t allow you to pinpoint exactly where noise is coming from like Dolby Atmos does. Regular surround sound only comes from a 180°  horizontal direction. Having a headset that gives you a 360° sense of audible spatial awareness  is what’s going to give you that extra advantage on the battlefield.

While I’m huge fan of what Dolby Atmos for Headphones is capable of, I had my doubts early on in regards to overall sound quality. There were a few brief moments of audio cutting out during my review time with the RIG 500 PRO Gen 2. But I’m not entirely sure if it was the speakers or if it had something to do with the wired connection. However I haven’t experience any cut outs since those early parts of the review period.  There were a couple of distorted moments as well but there was a lot going on in-game. Again, this hasn’t been a recurring  issue.

While it hasn’t been a completely flawless experience, I wouldn’t consider it as broken either. Is it a worthy headset in terms of audio quality? For the most part, yes. Aside from the technical glitches, the RIG 500 PRO Gen 2 delivers audio both loud and clear. Not only in-game with Dolby Atmos but also while watching videos and listening to music. However I will be keeping an ear out for any more audio flaws.

In regards to its design, I probably could have done without the flip to mute function. I’d honestly be happy with just a detachable microphone with a mute button somewhere on the headset itself. But one thing I wouldn’t change is its sturdy look and feel, which sets itself from the RIG headsets already in my collection.

The RIG 500 PRO HX Gen 2 isn’t entirely perfect in my opinion but it doesn’t deserved being benched anytime soon.