When I read the word “compact” I think about things my 5’7” tall self wouldn’t feel comfortable with. Compact cars instantly comes to mind. Not because I can’t fit, it’s because getting out of them is a pain in the butt, legs and lower back. But never have I thought about compact game controllers nor did I know of their existence. That was until I was introduced to the RIG Nacon Pro Compact, a new wired controller combining competitive level design and high quality yet extremely versatile audio quality.

Nacon have been known for being number one for third-party Playstation controllers in Europe since 2016. They were also the first to produce an esport controller. Although they’ve had a long run with producing controllers for Playstation, the RIG Nacon Pro Compact is the first controller to be designed for the Xbox One/Xbox Series X|S.

The Pro Compact is more than just a third-party spare controller for when mates come over. A lot more, both inside and out. I’d even suggest keeping this one as your personal go-to instead.

Before getting hands-on with the Pro Compact controller, I had some early expectations. Well, more like judgements. For starters, I’m fussy as hell when it comes to controllers. After three generations of consoles across 10+ years, I like all of my controllers to be wireless. Sadly the Pro Compact is not. However, it was successful at changing my mind quickly.

Out of the box, I found that it sports a thick and sturdy braided 3 metre cord. Though happy knowing it was a quality cord, I was more impressed with its length. There’s definitely no restriction in regards to distance between my TV unit and recliner. Which has been a problem in the past with other wired controllers. 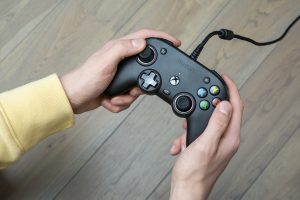 While I was happy with cord length, the controller itself didn’t seem like a perfect fit at first. The Pro Compact is 15% smaller than regular Xbox One/Series X|S controllers. This is to accommodate those who prefer a smaller form factor with less distance between buttons. Which, as previously stated, I had no idea was a thing. I’m not a heavy follower of esports culture.

Until recently, my preferred controller was one that “fit like a glove”. Both Xbox and Playstation, more so the latter, improved the form factor of their controllers when launching the Xbox One and PS4. So having something that was small enough for me to almost tuck two fingers below each grip was different. And a little daunting.

I wasn’t sure if this was going to be a comfortable experience as I have somewhat large hands. I could almost feel the cramps already when I was unboxing the Pro Compact. But, surprisingly, no such cramps were had. The Pro Compact turned out to be a lot more comfortable than expected. I didn’t need to have a controller that covered the entire surface area of my hands.

With the nature of the Pro Compacts design, most of my review time was spent playing multiplayer first-person shooters. And over time, I noticed a couple of things. Without putting tickets on myself, I felt like I was getting slightly better. Performance aside, my hands didn’t cramp up either which was a good start. They’d also sit differently over time than at the beginning of my sessions. Which, if you could imagine, started out as a full-handed grip.

The form factor of the Pro Compact’s underside allowed my hands to comfortably grip underneath using only two fingers. And after a while it looked like my hands were only just holding on for dear life.  However, I still maintained the same amount of grip and functionality than I would with a regular controller.

With less surface area for my hands to sit on, I felt a lot more freedom of movement. My thumbs never felt as if they were almost stretched to their limits. Nor did they have less area to move around in. The taller than normal thumb sticks, along with their amazing grip, never constricted thumb movement either.

The smaller form factor also takes the A, B, X and Y buttons into consideration. By making them larger and placing them closer together, this is meant to allow for faster reactions. Unfortunately, I was playing games that mainly used the thumb sticks and triggers so I never gave them a proper test run.

While I had my doubts prior to my review time with the RIG Nacon Pro Compact, I eventually reminded myself to never judge a book by its cover. Or size for that matter. First-person shooters were only one of three genres I tested the controller with, so I’m not sure yet if I’d use it across all genres. However it’s definitely been added to my regular controller roster when it comes to FPS games.

The Pro Compact’s exterior isn’t what makes it one of the most unique controllers on the market though. Internally it packs a couple of cool features, one of which is definitely worth your buck. Especially if you’re a competitive gamer or can’t afford high quality headsets.

The RIG Nacon Pro Compact comes with built-in Dolby Atmos for Headphones for life, no extra subscription needed. And not just for Dolby Atmos enabled headsets either, which definitely sounded too good to be true.

During most of my review time I was lucky enough to also test out the new RIG 500 Pro HX GEN 2 headset, which launches on July 15. But they already work with Dolby Atmos. And I wanted to test this claim out on two very different headsets using both the Pro Compact and my regular Xbox One controller. 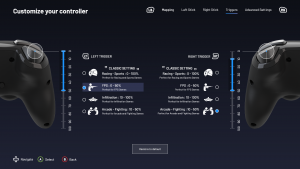 One was a pair of earbuds that came with my phone, which I barely noticed any change with. The other was a vintage pair of RIG headphones circa 2014. Unlike the former, I was able to notice the difference in surround sound quality while using my old RIG’s with the Pro Compact.

Personally, I wouldn’t rule out upgrading headsets from almost a decade ago. But the Pro Compact offers the same results when it comes to playing multiplayer shooters and the like where surround sound can make or break a victory. Just as long as they’re not earbuds as over-the-ear models seem to work much better with Dolby Atmos.

The other built-in feature is the ability to fully customize the controller in regards to button mapping, trigger/thumb stick sensitivity and dead zones. Which in my opinion should be standard in almost all controllers these days.

Unlike another controller I recently reviewed, I didn’t fiddle around with button mapping. And I’m not fully educated about thumb stick dead zones to say whether this feature is a hit or a miss. But trigger sensitivity is a feature I’ve definitely invested in.

Within the Pro Compact app on the Microsoft Store, thumb stick/trigger sensitivity are broken up into a few different genres. The first-person shooter trigger option for example sets individual/both triggers to only use the first 50% of a pull. Another reason why I believe I’ve upped my game.

In all honestly, the RIG Nacon Pro Compact has continued to restore my faith in third-party controllers. The added features and value for money blasts generic Xbox One/Xbox Series X|S controllers out of the water.