ROCKET ARENA: Everything You Need To Know

A brand new contender has stepped into the multiplayer arena and are here to literally knock you right back out of it. A small independant games studio by the name of Final Strike Games, a team made up of developers from some of the bigger studios including 305 Games, have joined forces with EA to bring a new fast-paced explosive IP to Playstation 4, Xbox One, Steam and Origin. And yes, it’s cross-play compatible on launch. Rocket Arena is a new EA Originals hero shooter that’s just been revealed to the public in EA Play Live 2020’s Livestream. Along with other members of the media and influencers/content creators, I was lucky enough to be invited along to a top-secret preview event last week, virtually of course due to COVID-19. Along with a full presentation about the game, EA and Final Strike also allowed us 3-4 hours of gameplay time with the majority of what Rocket Arena has to offer when it officially launches on July 14. Along with a plethora of information about the game, I was also able to grab a bucket load of game capture from most of the crazy multiplayer matches I played with others who attended.

So what is Rocket Arena? Rocket Arena is a fast-paced 3v3 no deaths 3rd-person hero shooter with a very large focus on rockets. Set on the planet Crater, explosive arena matches are held across a collection of diverse regions formed after a mysterious explosion some time ago. Each match runs no longer than 10 minutes so it’s the perfect game to be able to get a quick match or two in before dinner or bed. There are 4 PVP modes available at launch: Knockout, Rocketball, Treasure Hunt and Megarocket. There’s also one PVE mode called Rocketbot Attack which is essentially a vs. AI Knockout mode. It’s also the first EA game to have cross-play capability. 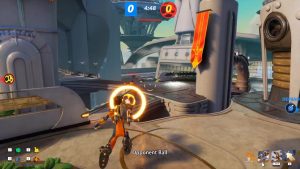 But what makes Rocket Arena so unique? While it may come off like other hero shooters currently available, Rocket Arena is different in multiple ways. Firstly for its main focus on rockets. There are no bullets in this shooter, just many different types of rockets. The planet Crater is rocket obsessed and if you look hard enough you can even find rocket artifacts buried within the arena’s environments. Each hero has their own backstory as well as unique rocket types that match with their personality. Take Blastbeard for example, he’s a pirate and when you think of pirate explosives you think of cannons. Blastbeard’s rockets are actually cannonballs with smaller rockets attached. Rockets also don’t instantly hit the person you’re aiming for as soon as you pull the trigger, giving those on the other end a chance to quickly dodge. Not only that but each heroes rocket’s act differently. Another hero named Izell launches sniper like rockets and also has the ability to launch homing rockets. While Blackbeard has heavier feeling rockets when launched but can also deal AEO damage.This is part of learning how each character plays and choosing which playstyle works best. There are 10 heroes available at launch but we were only able to test out 6 of them. You can also see these heroes in action in the video provided. 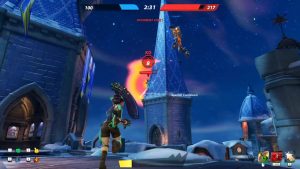 By now you’re probably still asking yourself “what does he mean by no deaths?” The most simple way to describe it is to use Super Smash Bros. as an example. The goal in Smash is to knock your opponents off the platform enough times until they’re out. Well this is essentially the case in Rocket Arena. Rockets don’t damage you, they essentially just knock you about. Your “health bar” is actually a blast metre. The metre fills up the more you get hit until you completely vulnerable. While your blast metre is in this state, a single rocket launch will knock you right out of the arena only to bring you back into the thick of it all 5-10 seconds later. Scoring particularly in Knockout mode works off of how many times you can knock an opposing team member out. However, while being knocked out is the last thing you’d want to happen you can use it to your teams advantage. Getting a birds-eye view of the arena can help you try to plan out your next approach.

Movement around the arena is incredibly versatile too. Since your own rockets don’t affect your personal blast metre, traversing up walls or blasting yourself in the air is as simple as aiming at the ground/wall and hitting the trigger. It’s an extremely handy way of getting yourself out of sticky situations, reaching boosts, etc. and just makes playing the game as a whole a bit more fun.

So now we have a general idea of how Rocket Arena works, what can we expect in-game? Unfortunately we only had access to 3 of the PVP game modes during the event. Knockout is your standard team deathmatch style, without the deaths, where the first team to 20 points wins. Rocketball is a football-eque game mode set in regular arenas where teams battle it out to get the ball in the goal. The first team to score 5 goals or the team with the most amount when the timer runs out wins. Honestly I was expecting something quite similar to Rocket League but I’m glad they’ve made it their own taking it away from the sporty Soccer feel. Then there’s my favourite so far, Treasure Hunt, where teams have to obtain the most amount of coins possible. But the way Treasure Hunt works is that it has two repeatable phases. The first is a treasure round where a member of your team must take control of the treasure chest for as long as they can with a maximum of 25 seconds. However during this time the other team are still able to steal the chest off you. The next phase is coin round where everyone runs around the arena collecting as many coins as possible. Also don’t be shy trying to keep the other team away from coins while you’re at it. These two phases repeat until time runs out or when whichever team reaches 250 coins first. The one mode we didn’t get to play, Megarocket, is a control zone capture mode which I’m very keen to try out as I’m a big capture/control mode fan. 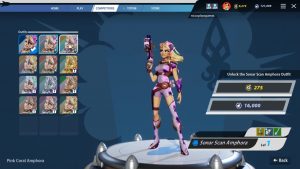 At launch there will be 10 maps, 10 heroes and 4 PVP matches available. You’ll also be able to customize your heroes/totems with over 350 cosmetic items in total. There are two forms of currencies you can buy cosmetic items with, one being a premium currency and the other earned in-game. However a lot of the hero cosmetics also seemed to be progression locked, only unlocking when you reach a certain level. Each hero caps at level 100 with no form of prestige levels being mentioned. However Rocket Arena is going down the same path as other casual multiplayer shooters by including a seasonal Blast Pass offering players something to continue working towards in the form of premium rewards. Each season is said to last 60-120 days giving you enough time to progress through Blast Pass and climb the ladder in Ranked play. Ranked progression will also reset at the end of each season. Season 1 is expected to begin on July 28 two weeks after Rocket Arena’s initial launch and will include a new hero, new map and unspecified new ways to play. A price point for the Blast Pass was not given.

Is Rocket Arena worth my time and buck? In my opinion this will attract a certain type of gamer within the multiplayer shooter community. Rocket Arena matches are short and fast paced. By the end of my hands-on time with the game, I was more than satisfied with the amount of time I was allowed. It’s fun but I don’t see myself spending hours upon hours binge playing like I have with other shooters in the past. But there are some who have limited gaming time and would normally only get one or two full matches of other multiplayer shooters before having to log off again. Rocket Arena could change all of that and may become a time-restricted persons new favourite. Maybe I’ll feel differently about the amount of time I’d spend in one sitting when Season 1 begins. Then I’ll have the options of working through my Blast Pass or competing in Ranked mode, depending on the toxicity of course.

The price point will also be a decision maker for some as well. At launch Rocket Arena will be available for $29.95 with a Mythic Edition available at a higher price. This version will come with extras as well as enough premium currency to purchase your first Blast Pass. However I did get a vibe from some of the others who were playing that feel this should have been a free-to-play game. But with it’s introductory price it’s a lot cheaper than some others at launch. It’s definitely not of poor quality but it really comes down to how often this will be played. Again, once Season 1 begins we might have a better idea of it’s overall value.