There’s a mulit-verse out there, I’m 95% sure of it. And I have this theory that Rollerdrome is a product of the multi-verse. Well, either it or its developer, Roll7. Who you might know from the OlliOlli series, which seems to be somewhat on-brand when you think about it. While OlliOlli is a game about skateboarding, Rollerdrome centres around roller-skating. But with a twist.

Rollerdrome is one part extreme sports and one part third-person shooter. So it’s kind of like a violent Tony Hawk’s Pro Skater from an alternate universe. But it’s not exactly a clone of Tony Hawk, nor am I trying to compare the two. Rollerdrome has a personality all of its own.

It’s the year 2030 and you play a young woman named Kara Hassan, a newcomer to the competitive world of Rollerdrome. A dangerous, fast-paced futuristic sport where competitors roller-skate around an arena while eliminating enemies to achieve victory. There’s a larger narrative loosely weaved throughout about a takeover by a huge corporation called Matterhorn. But I treated it like most others have with the modern day areas in the Assassins Creed series. As in “I don’t care about this, just let me go out and kill!” These narrative sections are also few and far between, so you’ll probably forget what’s happening outside of the arena anyway.

For a story that’s set in the not-so-distant future, it gives off a strong ‘70’s vibes. The vintage constume aesthetic mixed with the violent world of a fictional extreme sport also gives it that gritty exploitation movie flare. The comic book aesthetic is also a nice touch, and is seamless in comparison to other games that use a similar graphic style. To the unknowing eye, Rollerdrome would look like an animated feature as opposed to a game created using Unity. 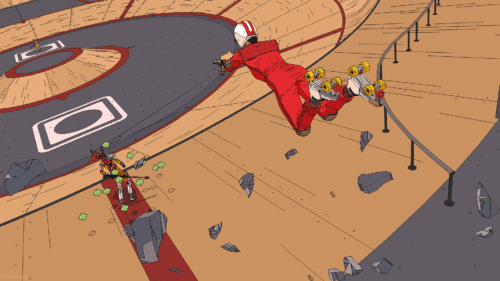 Visuals and bland narrative aside, Rollerdrome’s gameplay is intense. Each arena comes with a list of objectives to fulfil, like pulling off certain tricks or using a particular weapon to eliminate enemies. Completing all of the objectives isn’t necessary to progress within each of the four championship tiers. But also shouldn’t be ignored, as they also reward you with points to unlock further tiers. I know, none of that sounds intense. But we’ve yet to scratch the surface.

Zipping around the arena not only requires skill but also constant multitasking. Between pulling off different tricks to regain ammo and looking out for enemies, my fingers didn’t stop moving. However, Rollerdrome helps balance this out by using a “Reflex Mode”, which is sort of like “Bullet Time” in The Matrix. And it’s something you’ll be using a lot of. It’s a mechanic that also reminded me of My Friend Pedro, a game I also reviewed a few years back, which also uses constant movement while also slowing down time.

I became pretty confident with my skills after the first few arenas. But just as I was getting my groove, Rollerdrome started handing my arse to me on a silver platter. The difficulty curve eventually started to kick in, and I noticed that I couldn’t just “roll in” guns blazing. There’s a level of strategy that comes with dealing with different enemy types, which feels rewarding to overcome once you’ve found your footing.

If I have any advice though, it’s to keep smashing out arenas without stopping. The fast-paced nature of gameplay meant that even a couple of hours away from the game meant I lost all of my muscle memory. 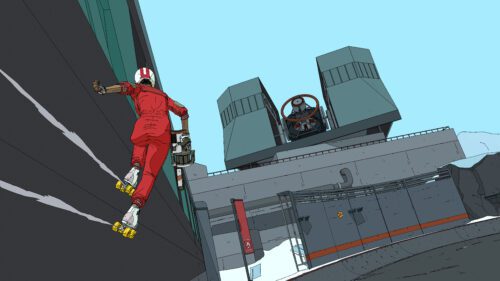 For those who aren’t as stubborn as I am, there’s an abundance of accessibility options available as well. You can essentially finish the game by eliminating damage taken. However, this also sacrifices submitting leaderboard scores.

But once you’ve gained momentum, it shouldn’t take long to speed through the 11 arenas in the main campaign. If you’re skilled enough, you can also try tackling the “Out For Blood” campaign. Which ramps up the difficulty level to 14. And no, I haven’t successfully completed said campaign. Although I have given it the ol’ college try, I feel satisfied enough to have completed the main story.

Now, I don’t want to be that guy with this opinion, as Rollerdrome was created by a small yet talented team of 44 developers. But I wanted just a little bit more from it. For example, changeable outfits. But this is something I can live without as well.

Then there’s the surprising lack of boss fights. As simple as it was beat, I was excited to see more after my first boss encounter.  But unfortunately, across all four championship tiers, there were only two boss fights. Even if there were at least two more, it would have broken things up a bit. Or even add to the difficulty of reaching the next tier.

Overall, Rollerdrome is a refreshing twist on the extreme sports genre I thought I never needed. It’s story may not have grabbed onto me, however the gameplay was an adrenaline rush from start to finish.