Room To Grow – The Review

When I was first approached about a new Indie puzzle game called Room To Grow, it was described to me as “deceptively simple” and “challenging”. As someone who loves their puzzle games, I took this description with a grain of salt. Puzzles usually don’t work me up, they actually do the complete opposite. Surprisingly it’s one of the few genre’s I use to mentally unwind. However, Room To Grow really defeated me and quickly left my brain a gooey mush.

Room To Grow is a homegrown puzzle title developed by Australia’s very own Mishka Kamener. From the outset, Room To Grow is a simply designed colourful puzzle game featuring a cactus plant. But I quickly found out it’s not that simple. The cacti’s mission is to get the other cactus pot plant into various holes in the ground by using various means of pushing it around. 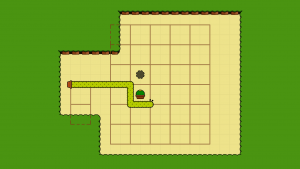 At first, Room To Grow reminded me of that mobile game Snake. You move around in a similar fashion except your body grows as you’re moving. Movement also restricts you to move along a set track. So as you’re moving around, the space available and movement options start to decrease. This seemed easy enough at first, but within the first 10 levels I had started to feel the challenge set in.

Levels started to become much more complex with a lot more to think about. You start off learning the basics of using your body to push this pot plant around by also pushing yourself off of obstacles. But the real challenge is thinking about how you’re going to move and position yourself to get there.

Each level requires you to use the space wisely. Which, again, sounds simple. But when you have obstacles thrown in and sometimes more than one pot plant, this can cause quite a headache. It also meant a lot of trial and error as well as patience.

Slowly but surely I was able to wrap my head around most levels. The level selection works like a linear map, however it does sometimes branch off onto an alternate path. Which in most cases where I’d give up on one level for the other, It became a much easier way to progress. While I found this extremely handy, Room To Grow does offer an easier solution by letting you completely skip levels.

So, to be completely honest, I walked away from Room To Grow multiple times. Was I completely defeated? No. But it stretched my patience and brain power incredibly thin, so regular breaks were required. But I’ve always been about giving puzzle games the ol’ college try without any help. No matter how many times it wants to throw hints at me. 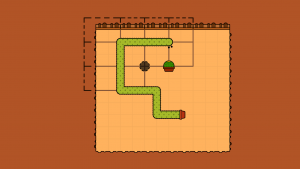 I’m fine to detour off into another level and leave a level behind uncompleted. I’m not too heavy of a completionist so I wasn’t losing much sleep over it. But to skip a level? I wasn’t going to do such a thing. I’m not trying to shame people who require a helping hand from the game or even play games on an easier difficulty. I’d be lieing if I said I’d never done the same thing in the past with other sorts of games. But I’d also be lieing if I said that I didn’t do it in Room To Grow just one time.

As you progress through Room To Grow’s multiple “worlds”, new types of mechanics and challenges are thrown at you. So just as you’ve gotten comfortable with the feel of the game, you’re going to have to wrap your brain around it all over again.

It was quite suprising how quickly Room To Grow cranked up the difficulty. While it allows you to practice the basics, it quickly throws you in the deep end to truely think for yourself. My earlier doubts of it being more challenging than it seems were definitely squashed, trampled on and then collected to become minced by-product.

And while the game defeated me as I was unable to finish every puzzle, I still really appreciate the amount of effort put into each level. The puzzles are genuinely smart and will require you to really think outside the box at times. Room To Grow isn’t a puzzle you’d unwind with but it’s worth checking out for puzzle nuts out there such as myself.

Room To Grow is available now on Steam.