Rune Factory 4 Special is the remastered version of the Nintendo 3DS game, Rune Factory 4. Similar to Harvest Moon, it’s a life/farm simulator but also combines a decent dose of action RPG elements. It even opens up with a fully fledged musical number in the style of an anime intro. From here I was expecting quite the adventure to be had. Your character literally comes crashing into the world of Selphia after being hit over the head and thrown off a flying ship. Suffering from amnesia, you have no idea who you are, where you came from or why you’re now talking to a dragon. Ventuswill, one of the legendary Native Dragons and governor of this world, believes this to be fate and bestows you with the honor of becoming the new prince/princess of Selphia. Depending on the gender you pick. Which isn’t as straight forward as you think.

Ventuswill gives you some official royal duties that are a little more down to earth than you’d expect. Tilling the farm must be done daily. Harvesting is important if you want to make money and complete requests by the towns people. Delivering goods to the locals will reward you with money, the possibility of better items and Prince Points. Prince Points can be used to purchase orders which help the town thrive and bring in tourists, additionally it also unlocks new stores, crafting, etc. So all of these activities join together to create a daily routine. 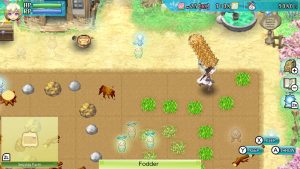 I didn’t have a problem with my new royal duties during the first couple of weeks. Requests dictated what I had to grow and depending on what was on the Orders list, I had something I wanted to work towards. But after a while I simply wasn’t excited for my daily routine. Not only that, I’d complete my duties by mid-morning. There were even a couple of days where if nothing of great importance had to be carried out I went to bed before sundown. There are other activities like fishing which can also make some decent moolah. But it’s probably the most simple and boring activity in the game with no skill required. I needed something to break this tediousness up.

Luckily there’s more to being a prince/princess than just harvesting crops and creating relationships. Shortly after your arrival you learn that outside the walls of Selphia castle have fields full of monsters, Guardians in particular. Ventuswill will send you to multiple dungeons to slay said Guardians which have quite a mysterious role in the story. Throughout you’ll be unlocking the mysteries of who these Guardians really are while questioning the integrity of certain townsfolk. But all of this means combat which means I’m having fun again. Not only that, you can even tame monsters to keep as your own and store in your Monster Barn. Although I kind of hoped for a creepier looking barn if it was to come with such a title. I became picky in this respect, selecting only the beastiest of monsters. They’re good help when it comes to harvesting and also drop food and crafting supplies daily. I can even take them out with me in combat, which can be a huge help at times. Rune Factory 4 Special’s combat system reminds me of other action RPG’s like Secret of Mana. It can sometimes be fast paced and being aware of your surroundings is a must. Especially of those pesky ranged enemy attacks flying in from off screen. However I dived nose first into it by accidentally setting the difficulty to Hard. At first I shrugged this off and didn’t mind a challenge. But I soon realized I’d messed up, big time. Combat is tame in the fields compared to dungeons you’ll eventually gain access to through story progression. Going from Normal to Hard is a massive jump in difficulty. 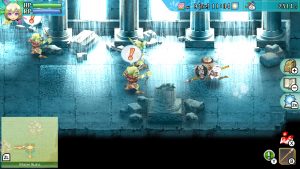 But after bringing the difficulty back down to normal, the fun times returned. However I noticed during the second dungeon that difficulty had ramped up once again. Of course I completely ignored the recommended level for said dungeon at first. After a couple of fails, it became quite evident that I was progressing through story content faster than I was leveling up and gaining stronger armor and weapons. How could I not see this coming? This is an RPG. And like any good RPG, Rune Factory 4 Special requires some form of grind. Even if this meant going back to my daily routine.

During this time though I developed a knowledge of crafting which almost made me want to stick strictly to harvesting, which says a lot. I’m a crafter in games, not a gatherer. However the crafting mechanics in Rune Factory 4 Special weren’t explained in great lengths and I felt like I was left to learn everything on my own. I slowly got there and cleared out a lot of materials I was hoarding. But for the most part the crafting could have been executed a lot better.

Now that I had learned the ways of the grind, as efficiently as one could, The combat side of story progression became a lot easier. Even though the boss fights would still kick my ass a dozen times over. Going from absolutely ridiculous to well played once I done more grinding and learned the fight. The action RPG side is where the game truly shines. If it wasn’t for the combat, I probably would have gotten bored easily. Not because it’s a life/farm simulator but by how much that side of the game actually delivers. The one major gripe I do have though mainly during my time in combat is loading up saved files. I found zero way of loading an old save file within the game let alone getting back to the main menu. For every time I’d want a do over I’d have to shut the game down and boot it back up. And believe me, there were plenty of do overs. 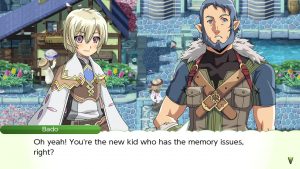 Rune Factory 4 Special also adds on a feature not available in the Nintendo 3DS version called Newlywed Mode. Which takes you through a new storyline after you’ve married your true love. Unfortunately I didn’t play around with this mode since I put zero effort into creating relationships with others. Honestly my main focus was on the action RPG aspect so you could say I was thinking more with my sword than my heart. Surely it doesn’t speak volumes about my personality, right?

Overall Rune Factory 4 Special is one of the better life/farm simulators I’ve had the pleasure of playing. While I thought I was visiting for the farming side, I was actually staying for it’s storyline and action RPG elements which left me by total surprise.

Rune Factory 4 Special is available now on Nintendo Switch and I give it a 7 out of 10.