WHEN it comes to gaming monitors, bigger hasn’t traditionally always been better.

I mean yes, if you’re like me and grew up gaming on a TV or PC with a 14in CRT monitor, living in the future is freaking great because all modern screens are like a movie theatre in comparison to back then.

Sometimes, however, you need a truly epic screen. Not just widescreen – something bigger, grander, and more expensive.

This is a big unit in pretty much every sense of the term. In a purely practical sense, the screen is too big and too heavy (it weighs 41kg with the stand) to courier out to every tech journo in Australia, so instead Samsung brought members of the press (including me, which is why you’re reading this) to their Sydney HQ for several hours of hands-on review time ahead of the screen’s October 24th retail launch.

Obviously the first thing that struck me was the size of the unit – complete with it stand, it measures 1.17m wide,  1.1m high and38cm deep. I’ve reviewed large 4K monitors before, but the Odyssey Ark had A Presence which the others lacked. It’s a 32:9 display and it is big in an attention-grabbing way. If it home decor it would be called a “Statement Piece”, and in this case its statement is “I like big gaming and I cannot lie”, followed by “and I can afford to pay for it” (See: AUD$4,499 retail price).

One of the more unusual features, but one I want to mention now, is that it can be (manually) rotated 90 degrees from horizontal to portrait mode (described by Samsung as “Cockpit Mode”. This sounds like a gimmick, but it genuinely isn’t, and I’ll be coming back to this feature shortly to explain why.

From a UI perspective, the Odyssey Ark blurs the lines between monitor and smart TV. While most monitors are controlled via a joystick nub underneath the bezel (which can be a pain in the neck to use), the Odyssey Ark has not one but two remote systems with it.

The “main” control is essentially a giant dial (with tactile feedback) and a few buttons. It works really well – it’s intuitive, easy to use, and even aesthetically pleasing.

The other remote is, as far as I can tell, more or less identical to the standard Samsung smart TV remote, and works in the same way.

Both remotes are solar powered, with USB-C charging. I like solar charging; it eliminates issues with flat batteries and also reduces battery waste generally.

The UI is, also as far as I can tell, the same as in the Samsung Smart TVs, except there’s no free-to-air receiver in it. This is a pretty good example of how this monitor blurs the lines between TV and Computer Monitor; it’s the size of a TV and is running the Samsung Tizen OS (and even has the various streaming TV and video apps on it!), but it’s designed to go on a desk and be used for gaming and content creation as opposed to sitting on the couch with some snacks and a beverage watching TV shows, movies or amusing stuff from YouTube.

The screen image is outstanding (as you’d hope, given the size and price of the unit) and I was able to test it with several games (notably Forza Horizon 5, Deathloop, Far Cry 5 and Microsoft Flight Simulator) via an Xbox Series X and a PC with an Nvidia RTX 3000 series GPU.

Everything was buttery smooth, pin sharp, with no lag, tearing, or any of the other issues that cone sometimes occur when the source output and monitor refresh aren’t in synch. The HDR effect was particularly noticeable too, thanks to the monitor’s bright display.

Given its massive size, the screen display area can be adjusted to something more reasonable – and it will fill the “extra” space around the image with filler animated background such as fire embers or (and I suspect this will be most people’s preference) that blurred effect you see on news broadcasts where someone’s filmed something on a smartphone in portrait mode but the news broadcaster needs to display it on a 16:9 format screen.

The Odyssey Ark can be set up to display three separate inputs on the one screen – one from an HDMI port, one from a Logitech webcam connected directly to the monitor via USB-C, and one (or two, if you aren’t using a webcam) from the monitor’s own apps (eg YouTube, a streaming TV service like Netflix).

Cockpit Mode is the real standout feature here, though. Basically you can turn the display 90 degrees onto its side into portrait mode, and have a very high monitor with either one portrait mode screen (for watching TikTok videos or something, I guess?) or divide it into three “multi-view” screens, which might be useful for content creators (eg being able to play a game, have their webcam feed, and also

Apparently it is possible to set up Microsoft Flight Simulator to display the “out of the cockpit window” view in the middle, the instrument dashboard on the lower view, and he overhead switches etc on the upper view – which seems like pretty much the best use-case scenario for this sort of set-up at present – but I wasn’t able to do that largely due to a combination of Flight Sim’s complex settings, time limitations, and the need to test a range of other features and games within the hours I had available.

To complement the gaming experience the Odyssey Ark also has a very good speaker array in it, comprising 60W 2.2.2 channel setup (one speaker in each corner, plus two central woofers) with Dolby Atmos compatibility.

The sound quality is very good – just like it is on Samsung’s TVs – but I think it’s safe to say the majority of gamers are using headsets so having good speakers in the monitor like this seems like it’s not going to be a drawcard.

For all its technical and display quality impressiveness, the Samsung Odyssey Ark still has a significant issue: It’s simply too big for most people’s gaming areas/workspaces.

You have to sit pretty far back from it to get the full effect – if you’ve got the space (as in the review set-up I experienced at Samsung HQ) then it’s great, but there is no way it’d fit on my desk at home with enough room for my keyboard and mouse etc, and more importantly I don’t think I could actually sit far enough back from my desk to be able to use it properly.

This is just as true with Cockpit Mode, because I’d need to be tilting my chair further back than I believe it goes so I could get the most out of it.

That doesn’t mean the monitor is automatically bad, because it isn’t – provided you’ve got the right setup to take full advantage of what it offers. 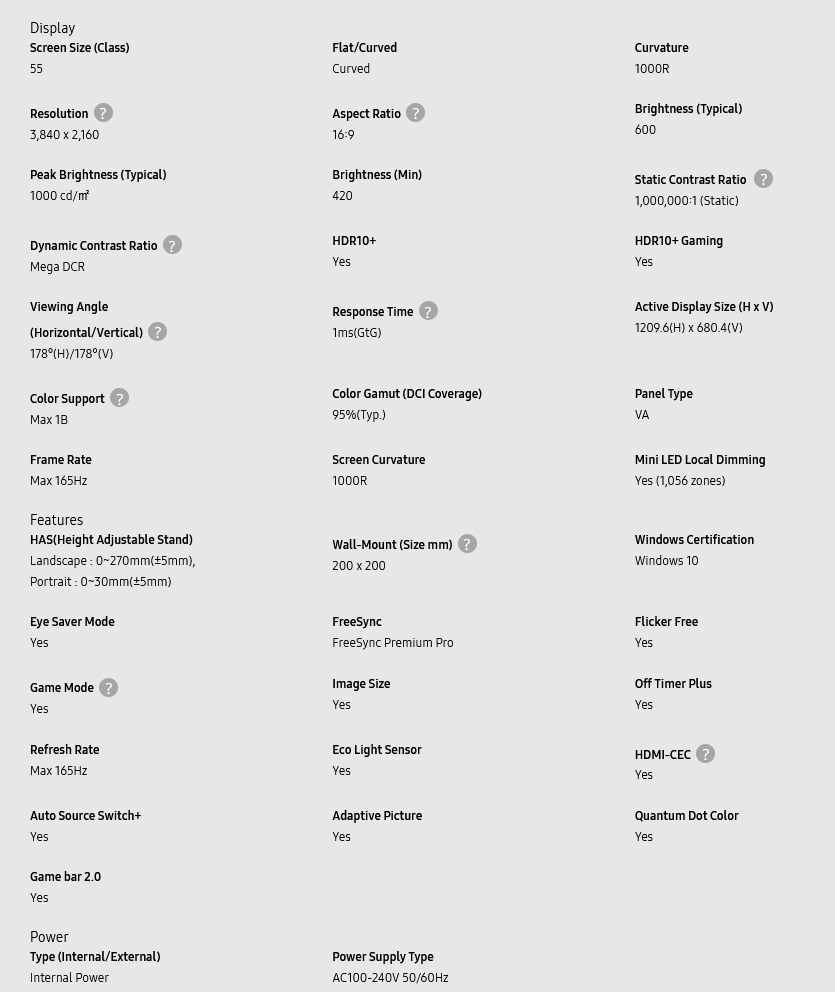 I was interested to see there’s no DisplayPort compatibility here – it’s HDMI 2.1 all the way. Not a huge thing (Most GPUs have multiple HDMI ports) but if you’re really attached to DisplayPort it is worth keeping in mind.

Rounding out things is that the monitor can only accept one external input in multi-port mode (not counting the webcam) – for its price, multi external input seems like it should be a given rather than a trade-off.

Overall though, if you’ve got a large desk and a flexible chair, this is going to tick a lot of boxes – especially if you’re looking for a multi-screen equivalent content creation/monitoring setup.

This isn’t a cheap unit by any stretch of the imagination, although Samsung are softening the price shock to an extent by offering anyone who pre-orders it via their online store a Secretlab Titan Evo 2022 chair with a limited edition Odyssey Magnetic Head Pillow (valued at AUD$759), as well as a Samsung 980 PRO NVMe SSD1TB (valued at AUD$235).

For most gamers, you can (and realistically probably should) save your wallet (and desktop, and chair) some pain and opt for something smaller screen-wise, but if you want a truly epic in scope monitor to accompany what I assume must be an equally epic gaming room or workspace, then you’ll absolutely want to be exploring the Samsung Odyssey Ark and its possibilities even further.